Revenue grew 33% to $825.1 million in its fiscal first quarter from the same period a year earlier. Analysts surveyed by FactSet had expected revenue of $814 million in the quarter.

For the current quarter, the company guided subscription revenue between $746 million and $748 million, up about 32% from a year earlier, as analysts had expected $742 million.

All sounds good in the hood, but the stock is down about 5.5% today for a few important reasons. First, sentiment, the stock closed yesterday at an all-time high, up 33% on the year and up 80% from its 52-week lows, Trading at 100x expected earnings and 11x sales I think it is safe to say the stock was priced for perfection, I would also add that while investors have pointed towards heavy losses in the latest bout of tech ipos and slowing revenue growth for the disappointing performance (see LYFT & UBER), it is important to note that on a GAAP basis, WDAY’s $1.68 in adjusted profits for fiscal 2020 swings to a $2.12 loss. Their $423 million in expected net income on $3.57 billion in expected sales (growing 26% down from last year’s 32%) swings to a loss of $505 million on a GAAP basis.

The point here is simple, many of the mega-tech companies that we know and love, all report their earnings on a Generally Accepted Accounting Principles, but the faster growing, considered more immature get away with reporting Adjusted Earnings... for now.

The other reason the stock is down today is that on the call management stated that despite their confidence to raise guidance that it would be “backend loaded”. This means that they are being optimistic that the stars will align that they will be able to achieve their guidance in the future despite many factors that are likely out of their control.

For the moment the stock has found some support at the uptrend has been in place from the Nov lows, but below that, we have a $25 point air pocket to the breakout level to new highs back in January: 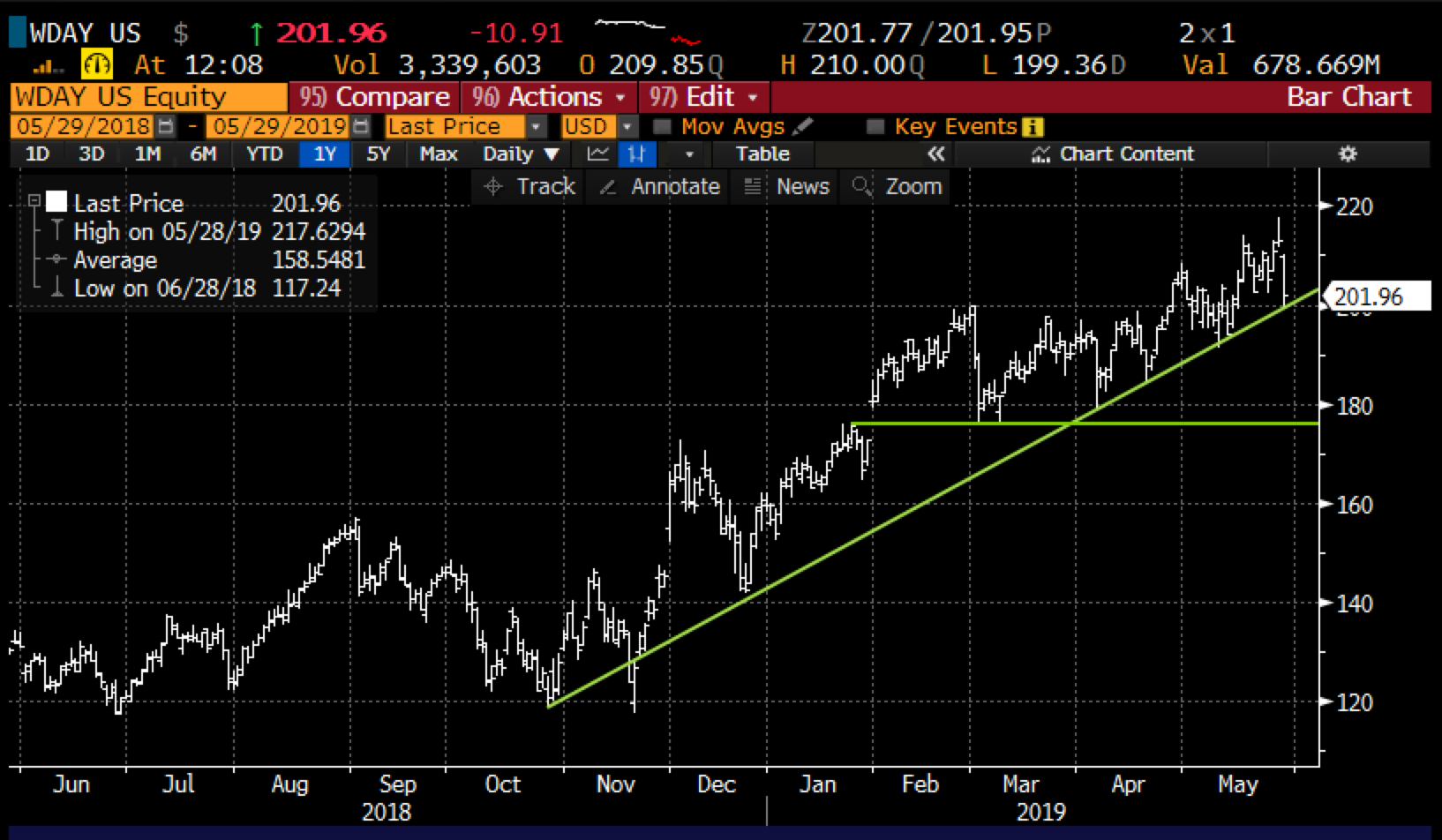 If the broad market does what I think it is going to do (SPX retest 2600 sometime this summer) I suspect investors who have been crowding in high revenue growth names like WDAY may come to their senses and take profits while they still have them.

So what’s the trade? If I were inclined to make a near term bearish bet I might consider the following put spread:

Rationale: this trade idea risks 2.7% of the stock price to make a bearish bet that the stock declines 12% in the next two months.

*** I would add one caveat, I am not sure this is a great press right here right now, might make sense to see how the stock closes… it almost makes more sense to press the short on further weakness, a break below the uptrend than on a hold on a day where there was news specific to the company and broad market weakness.