Back in early March, (Bonds Shaken, Not Yet Stirred) I made the case that U.S. Treasury Yields were about to take another leg lower:

Here was the trade idea I detailed to express the view that we are likely to see greater risk asset volatility in the spring, that treasury bonds could catch a bid, and the implied volatility on the etfs that track them was too low:

So what’s the trade? If you are looking for ways to play greater financial market volatility in the coming months, TLT vol is some of the cheapest you will find. But for the ETF to appreciate we would likely need to see an increasingly dovish Fed which would likely be a reaction to a weakening global economy. You could bet against stocks, but options premiums are a bit more expensive than the TLT…

Now the TLT is $128.65, up $8.35 or 7%, and the June 122 / 130 call spread that could have been bought then for $1.45, that expires in three weeks and can only be worth $8 on expiration is worth $6. At this point to remain long for the next few weeks you would be risking $6 to possibly make another $2, not exactly a great risk-reward. At this point, it makes sense to close the trade, take the profit and roll a portion of the profits up and out.

It is worth noting that $130 in the TLT is the level the etf gapped lower from the surprise election of trump in early November 2016. While this might serve as some near-term technical resistance, it is interesting that at the time, bond yields rose sharply because of the belief that a trump administration would be pro-growth, but the fact that we are now round-tripping the move two and half years later it is worth considering where we are in the cycle, especially as we appear to be heading into a difficult trade impasse with China. 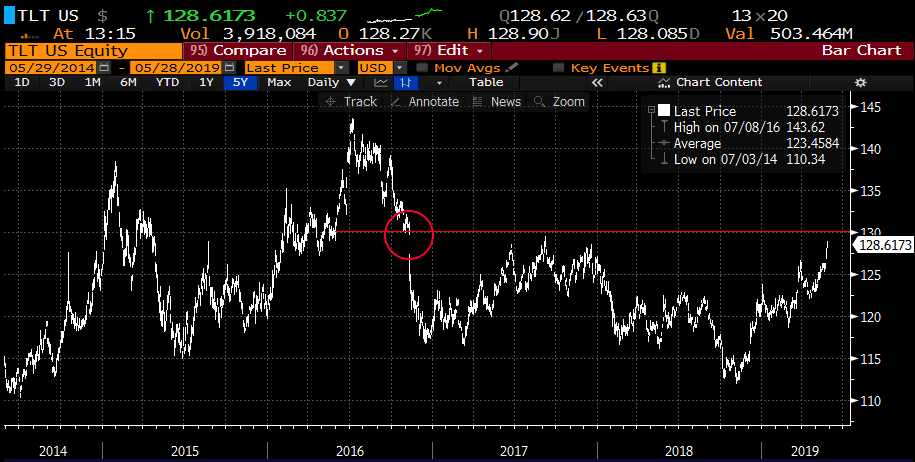 For those who like to look at the 10-yr Treasury yield as a reflection of growth expectations, it is hard to see how it does not re-test the level it busted out through in the days following the 2016 election and bounced hard off of in 2017 and not retest: 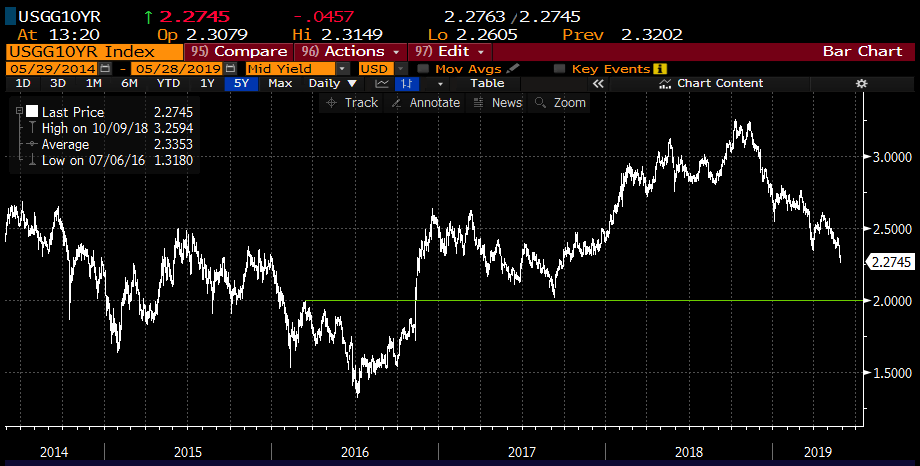 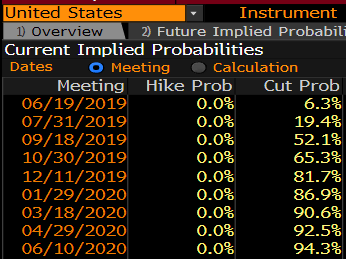 So what’s the trade? If I were inclined to roll this bullish view on US Treasuries (bearish on yields) up and out I might consider the following call spread in Sept in the TLT:

Rationale: this trade idea risks 1.25% of the etf price and can make 5.25x the premium at risk if the TLT is up close to 9% by Sept expiration.