The current tech IPO craze is causing many market participants who were around in the late 1990s to draw comparisons. I was around then, trading tech actively and also in the IPO market and frankly, I see very few similarities. Yeah, most of the new issues were losing money and had unproven revenue models, but in hindsight what is clear is that the internet and businesses and consumers were not ready for all those “internet” companies to be able to scale their revenue models and offer a path to profitability that could be consistently rewarded in the public equity markets. Those that seemed optimistic about the potential for these stocks to work for a sustained period after their IPOs were the bankers and momentum investors.

Tonight Uber will price their IPO, the largest since Alibaba in 2014, and the largest ever in terms of losses at the time of IPO. Despite the fact the company has a very clear revenue model for their core ride-share business, it remains to be seen if they can do it profitability, in different geographies outside the U.S. and while juggling the demands of other growth businesses like food delivery. I have no idea how the deal will go, but if Lyft’s response as a publicly traded company is any indication I would not be too optimistic in the near term. LYFT was supposedly 10-20 oversubscribed by investors on the IPO (depending on who you talk to) and despite its initial 20% pop, the stock is now 23% below its $72 IPO price on March 29th. CNBC is reporting today that Uber is only 5x oversubscribed, granted it is expected to be valued at more than 5x LYFT current market cap but make no mistake, that is far less than the underwriters would have hoped just hours to pricing. The Wall Street Journal yesterday reported that Uber would come at the midpoint, or possibly below the marketed range, I suspect the lower it comes the better the initial pop, but if it is too break like LYFT, I suspect the stock to remain in some sort of investor penalty box for at least a few weeks, maybe months as LYFT seems destined to remain in.

As I said above, the internet was not ready for many of the business models of the late 1990s that were rushing to public markets, it might be the case now that the behaviors that companies like LYFT and UBER are trying to disrupt are a few years away from a frequency in which these companies might be able to prove their path to profitability.

Which brings me to the stock of a company that went public in mid-1999, Stamps.com (STMP). STMP is trading down 55% today, shedding more than $600 million in market cap. The stock is down nearly 90% from its all-time highs made about a year ago. This is fairly remarkable for a company that nearly quadrupled its sales from 2014 to 2018, and is only expected to see a single digit decline in 2019 (likely headed lower though), per Bloomberg:

The issue today’s the company’s earnings guidance resulting from a simple fact, while printing stamps online, avoiding the post office might have sounded like a very disrupted thing some 20 years ago when STMP went public, people send letters far less than they did 20 years ago, you guessed it, because electronic mail. Here was STMP’s commentary regarding their EPS guidance, per Bloomberg: 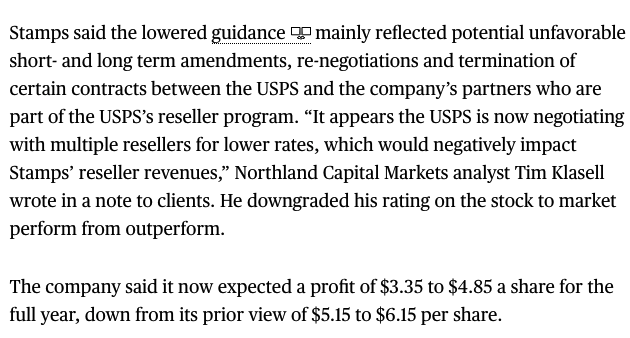 It is worth noting that one thing that is very different is that back on June 24th, 1999, when now-defunct brokerage firm Robertson Stephens (who I was a  big fan of and routine counter-party to) sold 5 million shares of STMP to the public at $22, the stock saw modest initial gains of ~$6 the next day, got as high as $197 by late November 1999, and then subsequently lost 98% of its value to its low in late 2001. The company did one thing on the way down from the highs that likely kept them afloat for some time, they sold 5 million more shares to investors in a follow-on offering in early December at $65! 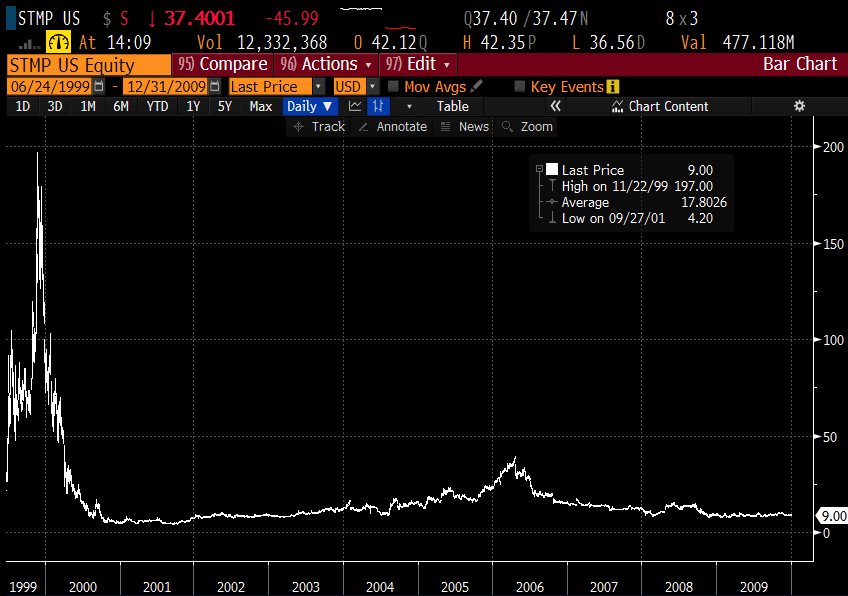 In the aftermath of the financial crisis, largely owning the very easy money policy of ours and global central banks, the Web 2.0 dream was born, and many consumers focussed internet start-ups were growing like wildfire with the added benefit of the proliferation of high-speed internet, the adoption of mobile devices by consumers and the heavy usage of cloud storage by enterprises. Companies like STMP were given a second lease on life… 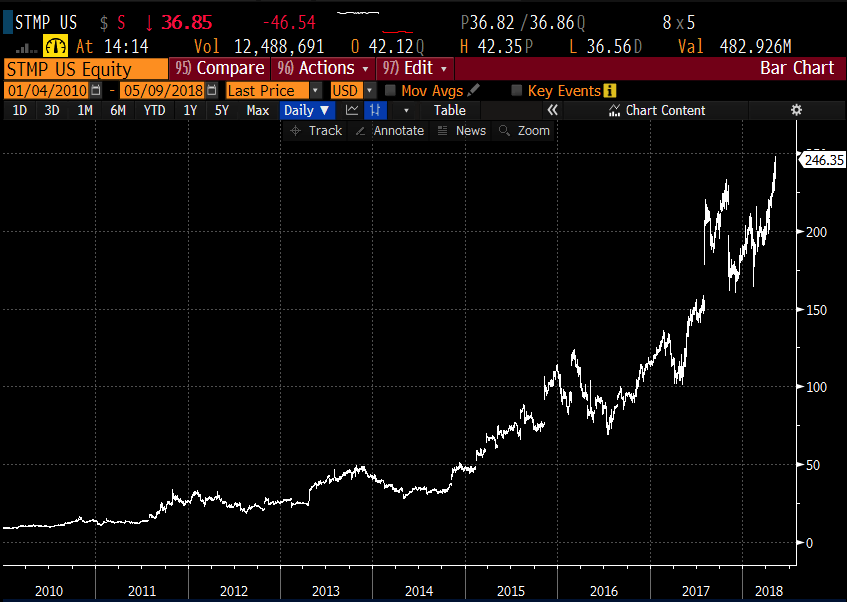 And then all at once… something changed in 2018, it still remains to be seen what the actual forces were to make their business model so much less profitable, but the stock has now had two consecutive 50% gaps following earnings guidance downgrades and we might have just heard the death rattle for this stock (maybe not the company just yet). 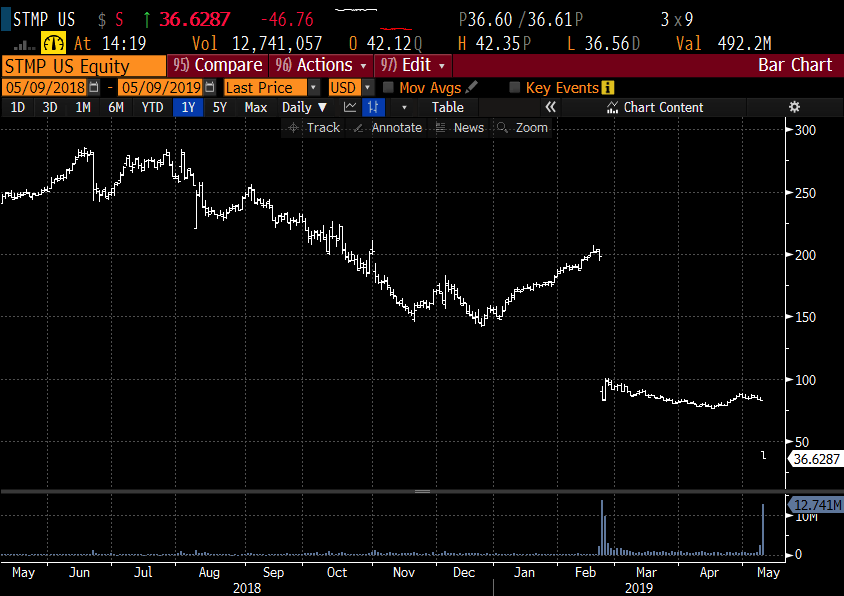 SO there is NO options trade, just thought I would offer some perspective on the many lives stocks and companies can live. I think it is also important to remember that the tech IPOs of today have altogether much more solid backing and aside from fraud and possibly a market crash, I would be shocked if any of these mega-cap names lost 90% of their value any time soon, but it helps to remember that from Amazon’s (AMZN) highs in 1999 to its lows in 2002 it too lost 85% of its value and from its highs in 2007 to its lows in 2009 lost 65% of its public market value. AMZN’s market cap at $937 billion is slightly above Apple’s (AAPL) $926 billion, and while they are both expected to have about $260 billion in sales this year, AMZN is expected to post $13.7 billion in GAAP net income vs AAPL at $53.billion…