As we consider the potential movement it is important to see how we get there, with the stock trading at $61, the May 10th weekly 61 straddle (the call premium + the put premium) is offered at $6.30, if you bought that you would be playing for a move greater than what is implied by the options market and would thus need a rally above $66.30, or a decline below $54.70 by Friday’s close to make money. Obviously for those with a directional bias and looking to define their risk, buying the at the money call or put for about $3.15, or 5% of the stock price dramatically reduces the premium at risk, but you need to get one really important thing right on top of magnitude of the move and timing… direction. With options prices as high as they are, traders buying premium into tonight’s print better have high conviction.

In the video, I highlighted the reactions the day following some other high profile tech ipos in years past, most notably Twitter and Snap Inc’s 24% and 21% declines in 2014 and 2017 respectively, and Facebook’s 11% one day drop following its first report after its IPO in 2012. Newly issued stocks have the potential to experience extreme volatility in these situations as investors who bought on the IPO do not like to hear too many surprises in what is likely two to three month’s since the company gave investors a ton of commentary on the business during the pre-ipo investor roadshow… and when the story changes after the first report the stock usually gets creamed. That said when the company is able to reinforce the positive story the stock should see more buyer interest. In the case of LYFT, by all indications, investors felt fairly optimistic about the stock’s prospects in the lead up to the IPO, despite the company’s very clear disclosure that they see no path to profitability anytime soon (paraphrasing). The stock’s poor performance since the IPO is fairly curious given how oversubscribed the deal was, causing underwriters to raise the price of the deal to $72 above the initial range of $62 – $68, which also resulted in an initial open near $88, up more than 20%, but a first day close up only 8% near $78. Once the stock broke price, it has spent the better part of the last month in the high $50s, low $60s, to suggest that this report is important is an understatement, especially on the eve of Uber (it’s much larger rival’s IPO expected this week). A beat and raise, and an Uber deal that goes well and I suspect this stock is up in line with the implied move of 10% by the end of the week. A miss and a guide lower and the stock has no floor for the time being, will likely make a new low. A miss, a bad uber deal and a market in a sell off similar to q4’s trade/ growth / central bank scare and lights out for any high growth, high loss newly listed issues.

To my eye, and being cognizant of the stock’s limited trading history, the implied move of about $6 lines up with recent breakdown and support levels: 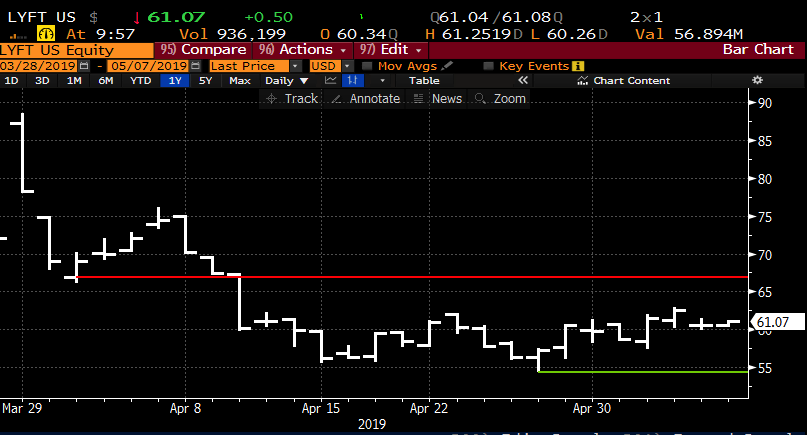 This morning the WSJ”s Marian Armental highlighted the following expectations for LYFT: 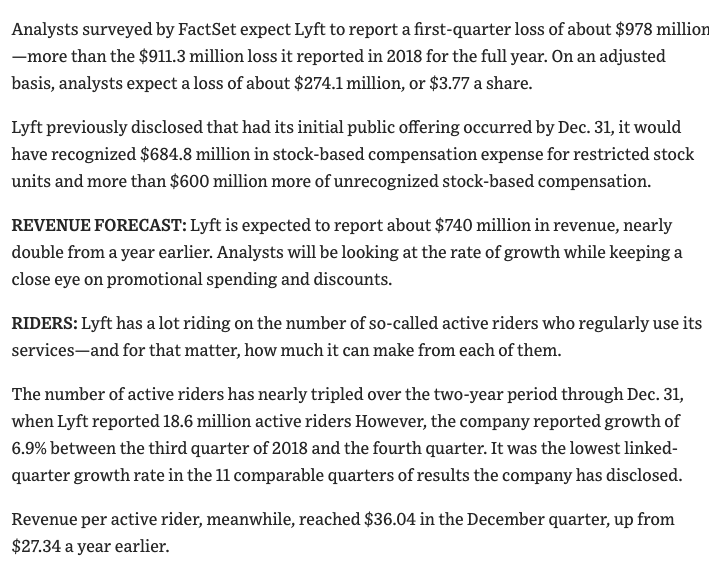 So what’s the trade? To be 100% honest, I have no idea how investors react to what I suspect is decent news. This management seems very measured, and considering they gave a ton of financial disclosures in March on their roadshow when the stock’s indication was in the mid $60s I would be shocked that much has changed since then from a fundamental standpoint and I see little reason that if the company were able to guide positively that the stock would selloff, I would also note that 44% of the shares outstanding have been sold short, there has been much speculation as to why some private holders with funky lockup restrictions hedging, Uber holders using LYFT to hedge and those looking to set make a fundamental short on the unproven business model. But near term, this could be a dangerous cocktail for shorts.

Here are a few ideas for long holders to take advantage of high implied volatility in the name:

If I were long stock I might consider overwriting shares by selling out of the money calls near the implied move,. For instance, with the stock near $61, the May 10th weekly 67 call can be sold for near $1, if the stock were below $67 on Friday’s close you would take in the $1 in premium.

Or for long holders who might add on a down move, one could sell an out of the money put, for instance with the stock near $61 the May 10th weekly $55 put can be sold for nearly $1. If the stock were above $55 on Friday’s close than the investor would receive the $1 in premium.

If I were long stock I might consider adding a 1x 2 call spread, which is essentially a levered overwrite… for instance…

Break-even on May 10th close:

Profits of the stock up to $67, but if the stock is 67 or high you have effectively sold the stock at 71 (the short call strike plus the 4 in premium, the width of the call spread) think of it as overlaying 100 shares of stock but also adding a 4 wide call spread between 63 and 67.

Losses of the stock below current levels, basically adding no risk, but limiting the profit potential above 71 between now and Friday’s close.