Alphabet (GOOGL) will report their Q1 earnings today after the close. The options market is implying about a 3.6% one day move tomorrow in either direction, which is rich to the average one day move over the last 4 quarters of about 2.9%, and well below the 10-year average of about 5.3%.

Wall Street analysts remain overwhelmingly positive on GOOGL with 39 Buy ratings, only 3 Holds and NO Sells, which is in fairly stark contrast to Apple (AAPL) one of the “As” in the MAGA complex, which has the lowest percentage of Buy ratings in more than decade 21, vs 22 Holds and 3 Sells, Microsoft (MSFT) and Amazon (AMZN) are also beloved with the analyst set with the former sporting 34 Buys, 2 Holds and 2 Sells and the later 47 Buys, 2 Holds and only 1 Sell. As we head into the GOOGL’s results tonight and AAPL’s tomorrow it will be interesting to see if the positive sentiment, relatively low expected movement and positive reactions that MSFT and AMZN got last week to their prints will be the case with GOOGL tomorrow.

Shares of GOOGL are up 21% ytd, mildly underperforming the Nasdaq’s 22.8% gains, but up 30% from its 52-week lows made in late December and within 1% of its all-time high made last summer: 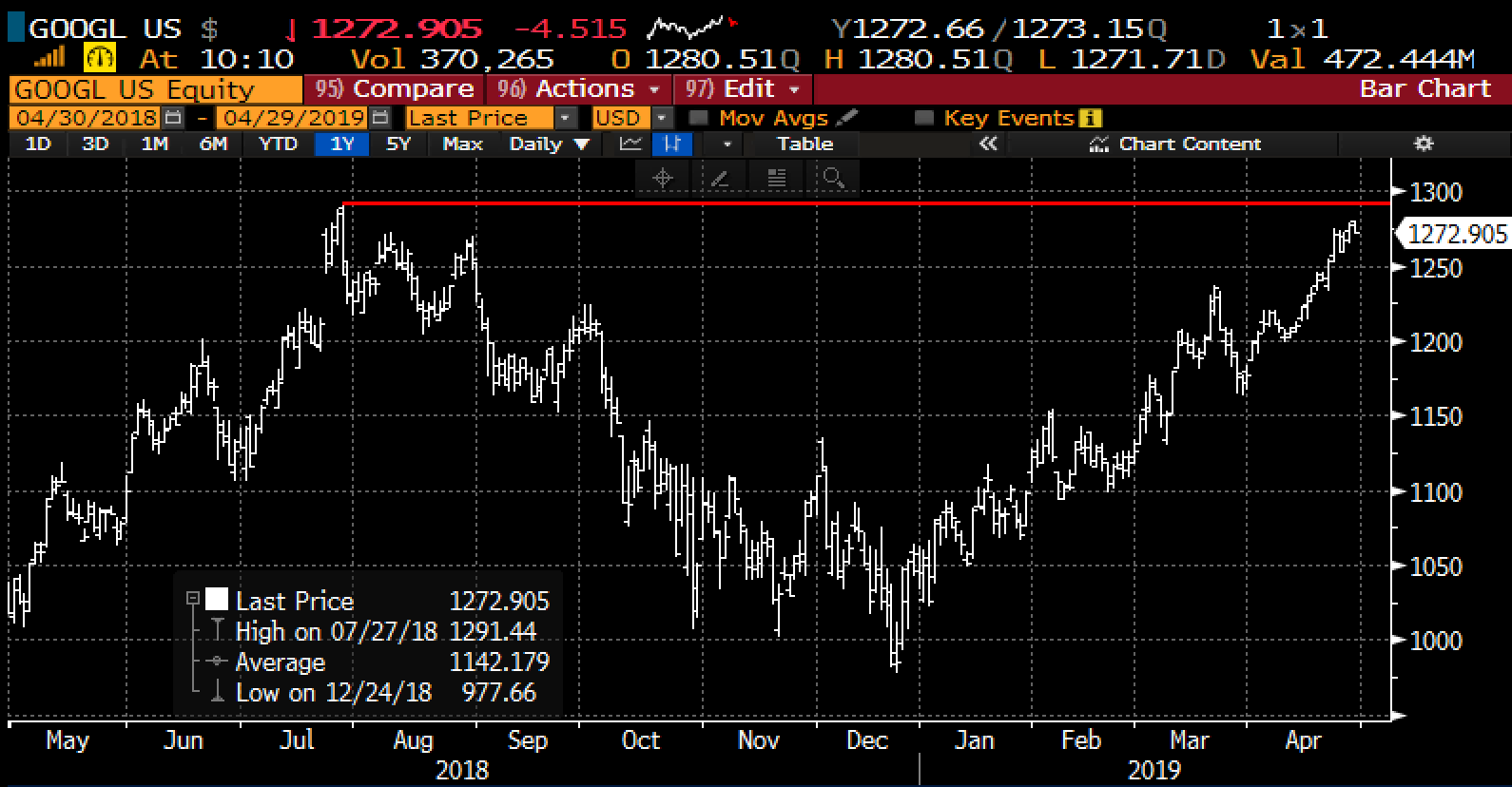 As for what to expect in the quarter, top-ranked Internet analyst Mark Mahaney from RBC Capital, who rates GOOGL a Buy with a $1300 target expects (from research note last week):

1) Revenue and Operating Margin Trends for Core Google: We are looking for Core Google gross revenue of $36.77B (up 19% Y/Y) and net revenue of $29.73B (up 20% Y/Y), driven by ongoing strength in Mobile Search, YouTube, Hardware and Programmatic. We are also looking for $10.03B in Core Google GAAP operating profit (a 27.3% margin, which would be flattish Y/Y).

4) TAC: In terms of TAC, we are generally modeling muted ongoing growth in TAC (20bps Q/Q for both Google Properties and Network Sites bringing them to 13.2% and 70.2%, respectively)

My Take Into the Print: EPS growth of GOOGL is expected to materially downshift in 2019 from last year’s 37% (GAAP) to just 6% this year, despite only a minor expected deceleration in revenue growth from 23% in 2018 to 20% in 2019, nearing an astounding $132 billion. Like FB, GOOGL has been forced to step up spending on security measures, and gross margins are expected to take a massive hit in 2019 to below 70% for the first time ever, down from the mid to high 70s over the past decade:

Given the fines that FB is being forced to pay, and the scrutiny on the company, I would not expect GOOGL to take their foot of the pedal, that appears to be on the metal on the cost front for at least another couple quarters. They at least need to the optics that they are doing everything in their power to combat their platforms being co-opted by bad actors in the lead up to the 2020 US presidential campaign. Trading at 27.5x expected 2019 eps growth of just 6% looks like a fat spread when you consider how easily it rolled off the tongue to say 1x PE to Growth even in the mid-20s over the last few years.

I would also add that the stock has held the 5year uptrend like a boss, but now approaching the prior all-time highs, up 30% in four months I would expect it to take a material beat and raise for the stock to break out to new highs in a meaningful way, merely an in-line quarter for it to consolidate below the highs, while a miss and a guide lower and the stock is likely on its way back towards 1200-1150: 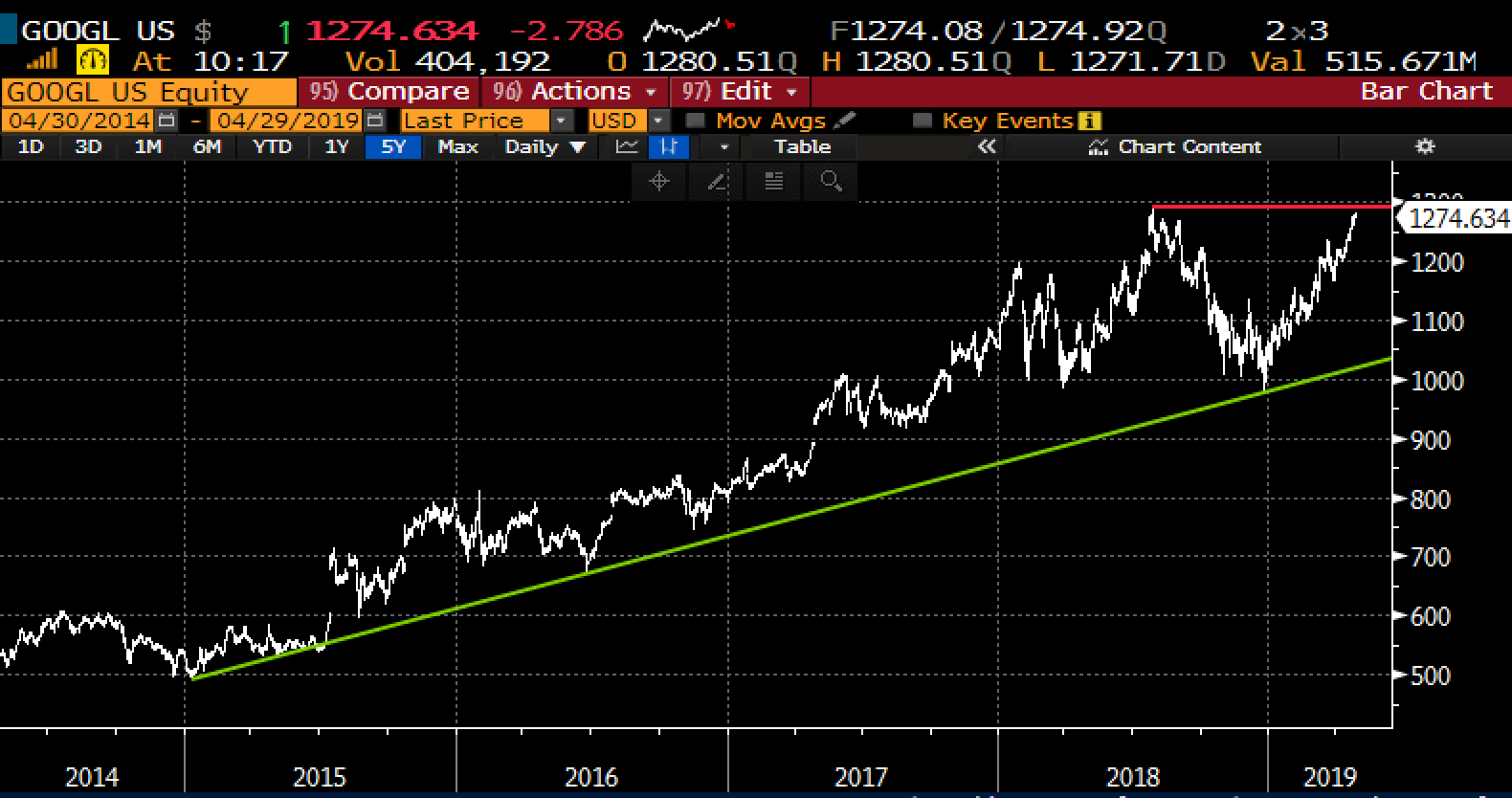 So what’s the Trade? Two ways to play…

First, if I were inclined to play for a pullback in the coming weeks/months of squishy guidance, I might consider the following put spread in June expiration:

Rationale: this trade offers a break-even inline-ish with the implied move for earnings, and profit potential of up to 5x the premium at risk, decent risk-reward for those who see the stock back towards 1100 by mid-June.

Second, If I were Inclined to play for a breakout I might consider the following call spread:

Rationale: This trade risks 27 to possibly make up to 73 in the event the stock is up 10% in a month and a half. The risk-reward is just ok here… calendars might make more sense if you thought the stock might consolidate in and around 1300 in the near term…