Facebook (FB) will report their Q1 results today after the close. The options market is implying about a 6.5% move in either direction, which is well shy to its 10.6% average over the last four quarters, but just below the 7% average since its public debut in 2012.

Shares of FB are up 40% on the year, and up 50% from its 52-week lows made over Christmas. The stock is now approaching what some technicians might view as resistance near its Q1 2018 highs and then its post-crash high following their Q2 earnings disappointment. A look at the chart from the start of 2016 shows the stock’s bounce in December came right where it should have at the congestion area from ate 2016. Taking out the melt-up last summer, the stock appears to be approaching the high-end of its two-year range: 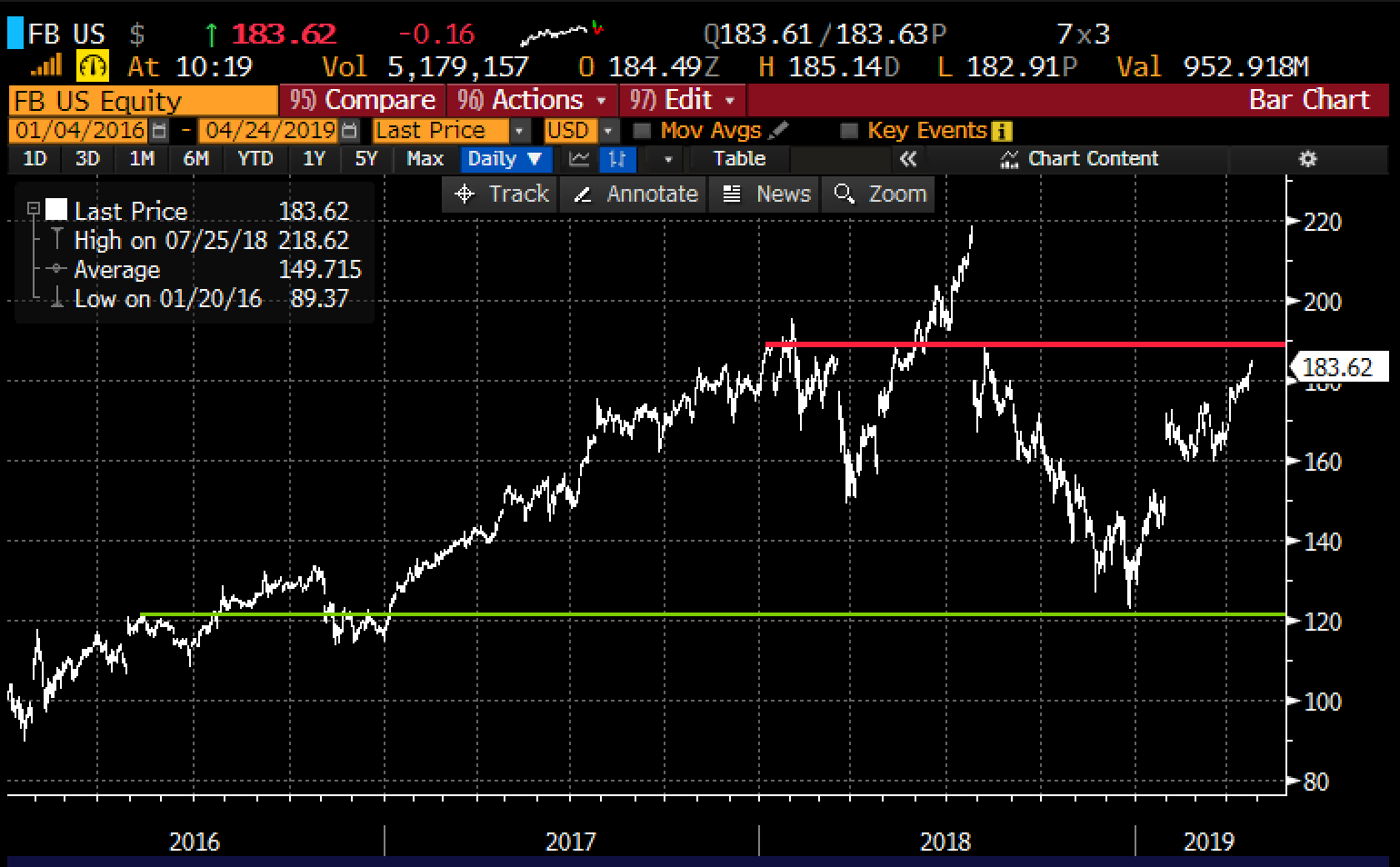 Despite the dramatic negative shift in investor sentiment in the second half of 2018, and now the reversal in the first four months of 2019, Wall Street analysts remain overwhelmingly positive on the stock with 39 Buy ratings, 9 Holds and only 2 Sells. One reason why analysts might be clinging to their Buy ratings is the cut to 2019 earnings expectations have been fairly dramatic from a year ago, with the consensus now calling for the company’s first ever annual eps decline in 2019 (GAAP), down from 23% last year, per Bloomberg:

Despite the dire expectations for eps decline, consensus expectations are for their revenue machine to continue to chug along at 20% yoy growth for the next three years, getting near $70 billion this year and close to $100 billion in 2021, per Bloomberg:

Made evident by this year’s bounce in the share price, Investors have gotten comfortable with the costs associated with beefing up security measures on their platform, thus the yoy eps downgrade and the possible headwinds of regulation. One focus on the call will be Facebook CEO Mark Zuckerberg announced in a blog post in March that the company was making a significant tweak to its business model in what he called A Privacy-Focused Vision for Social Networking, something more akin to Snap Inc’s (SNAP) business model which might cause in the near term further headwinds to eps growth.

One Buy rated analyst, RBC Capital’s Mark Mahaney who has a 12-month price target of $200 highlights the following ‘Key Items to Focus On’ in the quarter in a note to clients:

My View into the Print: I suspect the broad market rally at the prior highs is getting fairly long in the tooth, and while mega-cap tech stocks like Facebook, Amazon, Apple, Alphabet have yet to make new highs like the SPX and the Nasdaq, their ytd out-performance is notable and I am not sure that slight beat and raise quarters are enough for them to get back to prior highs in the weeks to come. Longs might consider a strategy like a collar, selling an out of the money call and using the proceeds to buy and out of the money put in the same expiration, allowing for upside to a point, but most importantly defining risk in the stock to the put strike. An investor would collar their stock if they did not want to sell it, but are more concerned with extreme downside into an event or over a stated period of time they then are about the extreme upside.

Profits of the stock up to $200, or $17, the stock would be called away at $200 (or could buy to cover short call if the stock is above to keep the long position intact).

These break-evens are in addition on the downside of the 50 cents it would cost to collar the stock (the cost of the put premium less the credit of the call premium) and deducted from the gain on the upside.

Again, the tradeoff is a limit to potential upside for potential downside protection.