In early March when Facebook CEO Mark Zuckerberg announced in a blog post that the company was making a significant tweak to its business model in what he called A Privacy-Focused Vision for Social Networking, something more akin to Snap Inc’s (SNAP) business model, I made the case that investors might soon view this as a bullish catalyst for SNAP shares, validating their ephemeral approach to “social media”:

SNAP’s share price resilience on the FB news tells me a couple of important things, for now. First, imitation is obviously the sincerest form of flattery. FB knows that SNAP has a very unique product offering, while they might be able to duplicate it for their existing users, they might be able lure SNAP’s dedicated user base. So there is a sense of scarcity as it relates to SNAP’s offering and platform. Second, with the expectation of a slew of tech IPOs in the coming months, SNAP’s 30% revenue growth and $11 billion enterprise value (despite continued losses) might cause some investors to see SNAP as cheap on a relative basis. And third, while SNAP founder and CEO Evan Spiegel have super-voting rights and he can do what he wants with the company, there may come a time in the near future where SNAP would be a very valuable property for a larger online platform. There are no shortages of combinations that I can come up with, the first being a merger with Twitter (TWTR), or acquired by Google, Amazon, PayPal, Disney, Verizon, AT&T… you get the point.

When I wrote that the stock had already rallied 100% from its all-time lows made on Christmas, with the stock just below $9.50. On the heels of a couple of upgrades, the stock continued to run, earlier in the month trading as high as $12.50, but has come back in a tad to the uptrend that has been in place from the Christmas lows: 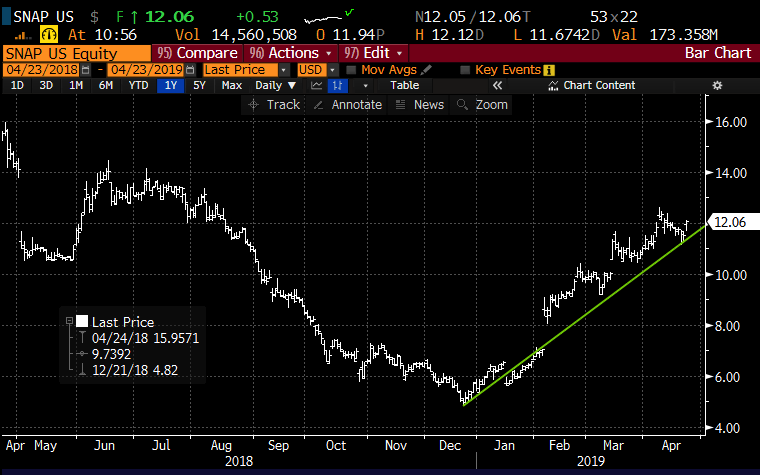 SNAP will report their Q1 results after the close today. To suggest that Wall Street analyst has been offsides on the name in 2019 is an understatement, despite the stock’s 118% YTD gains, there are only 5 analysts who rate the stock a Buy, with 25 Holds and 8 Sells!  Short interest is at about 15% of the float.

The options market is implying about a $1.90 move between now and Friday’s close, or about 15.5%, most of that is for Wednesday’s post-earnings reaction. The stock on average has had a 20% one-day post-earnings move since going public, with only two of them higher, both when reporting their Q4 results in early February.

Last night on CNBC’s Fast Money I detailed what appeared to be some short dated put buying in the stock during yesterday’s trading session:

My Final Trade on the show was not to chase SNAP into the print. WIth TWTR’s results this morning, and the stock trading up 17% I am slightly hesitant to reiterate that call. Let’s take a quick look at expectations.

One of those Buy ratings came recently in the form of an upgrade earlier in the month from RBC Capital’s Mark Mahaney after their Partner Summit, from his note on April 5th: 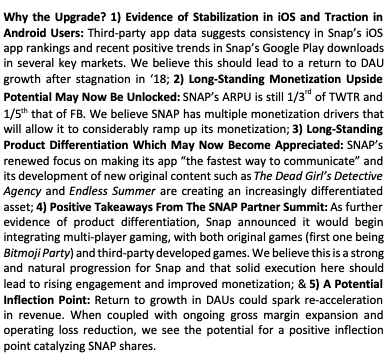 If SNAP’s business model is truly at an inflection point, growing Android users, show steps towards greater monetization, with a reacceleration of daily active users resulting in sales and operating loss reduction as Mahaney suggests could be in the cards, then the stock could be on its way to being a teenager, again.

Mahaney highlights the following Key Issues to focus on in the report:

So what’s the trade? To state the obvious with options prices where they are it is a very tough proposition pitching long premium directional trades, get the direction wrong and the trade is a dead-bang loser, and that’s not all, you need to also get the magnitude of the move right and of course the timing. But we are in the business of defining our risk for those with convicted directional views, so let me take a stab at a couple of ways to play in-line with the implied move…

Rationale: this trade idea risks 4.5% of the stock price, for a break-even up nearly 9% with a profit potential of 3x the premium at risk if the stock is up 20%. This is not a great risk-reward, risking 4.5% for three days to make a bet the stock is up at least 9% with max payout up 20%. But the stock has moved on average about 20% in the last 8 quarters, if it does move higher it is likely to at least breakeven. One could consider selling and out of the money put, like the Apr 26th 11 put at 50 cents and reduce the premium at risk to just a nickel vs the call spread, but then there is the added risk of suffering losses below 11.

On the flip side, if I were inclined to play a miss and guide down I might give the trade idea some time to play out as I could see the stock in the next couple months retracing a good bit of the recent gains, possibly back to $8, but to be fair I see this as a low probability…

Rationale: this trade idea risks 9% of the stock price, has a break-even down 9% but has nearly 2 months to expiration. The max gain of this trade is down 33%, but I would remind you that the stock is up 118% on the year.

I guess the main takeaway here is that long premium directional trades into an event like earnings, in a name like SNAP where options premiums are rich, and the history of moves is large, is a bit of coinflip with worse odds.