On Tuesday morning the CEO of Blackrock, the world’s largest asset manager with over $6 trillion in assets said to his friends on Squawk Box on CNBC that most investors are “under-invested” and that he sees a “risk of a melt-up, not a melt-down” in stocks. #Timestamped

Fink was talking about equities globally. A look at the MSCI World Index shows the breakout in early 2017 which yielded gains of nearly 25% to its highs in January of 2018. What you might find fairly interesting is the 20% peak to trough decline stopped nearly to a tick at 1800, obvious technical support: 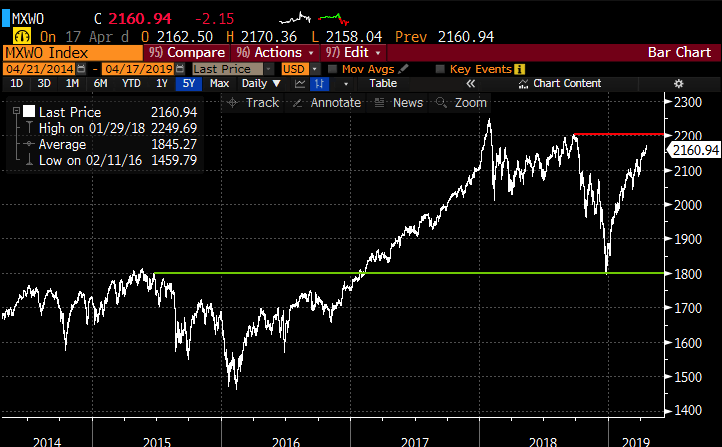 Your guess is as good as mine, but 2200 looks like decent near-term technical resistance.

Now let’s take at look at the S&P 500 (SPX), now just 35 points from its prior all-time high made in late September. On an equal-weighted basis, the SPX is at new highs. 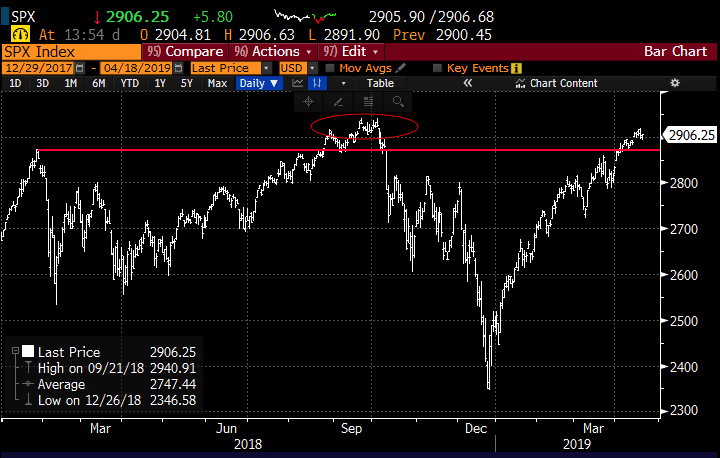 By the way, melt-up is not a technical term, but I suspect it would mean a breakout and a rally of at least 5% to 10%, and probably closer to 10%.

The potential for a melt-up from here, after the SPX has rallied 24% from its Christmas lows, and is up 16% year to date seems highly unlikely. Is a new high in the offing, sure, but I think it is important to remember when the SPX was making new highs in September, they were fairly short-lived and followed by the largest % peak to trough decline in years.

It is worth noting as options prices in the SPX are making new 2019 lows as the index reproaches the September highs, 30-day at the money implied volatility is a couple of points above where it was in the lead up to those prior highs, signaling the very slightest apprehension on behalf of SPX market makers:

The headwinds to equity returns since the start of 2018, aside from the usual geopolitical (North Korea, Brexit, Middle East Tensions) have been the pace of rate increases by the Fed, tariff induced trade war with China with the backdrop of weakening global growth. Well the Fed stop raising and actually got a bit easier with the end of QT, looks like we will have a trade deal in a month or two, albeit likely one that doesn’t look too different than our arrangements before (think NAFTA 2.0) which brings us to the resolution of the first two leading to a reflation of global growth.

Equity markets in the U.S. do not seem to be too bothered by the prospects of an earnings recession as strategists expect SPX earnings to be down 2-5% in Q1 and possibly similar for Q2. I am not sure that is such a bad thing, we know because of the tax cuts put in place last year that comparisons would look difficult in 2019 on a yoy basis, but it speaks to the fact that 10 years into the economic recovery it took a massive Fed pivot with Fed Funds below 2.5% to keep the equity market from totally cratering.

If a melt-up means 5-10% from a high, then a meltdown is likely 10% from a high. I think there is a high probability that the SPX makes a new high, maybe it does what it did in August/September and levitates at those highs, but the next 10% move, in my opinion, is very likely lower. Even with a trade deal with China, the disastrous economic data out of Germany speaks to Europe truly ailing and the prospect of a V reversal for global growth does not seem great, possibly that an average trade deal is already factored into global equities prices. Which makes stocks very susceptible to the type of meltdowns we had last year, one Jan/Feb of 11% and then nearly 20% in Q4.

So what’s the trade? For months I have been very reluctant to try to short the SPX, but to do so in Jan and Sept last year when the SPX was 2900 paid off handsomely. So here we go via the SPY, the etf that tracks the SPX.