Johnson & Johnson (JNJ) will report their Q41 results tomorrow before the open. The options market is implying about a $4.10, or about a 3% move in either direction between now and next Thursday’s close.

Prior to Reuter’s suggestion in December that the company knew for decades that its baby powder contained asbestos, JNJ was making new all-time highs, showing relative outperformance to the broad market. While the stock has recovered 13% from its December lows, it has lagged the S&P 500″s (SPX) 22% gain during the same period and is still down nearly 9% from its all-time highs while the SPX is within 1%. 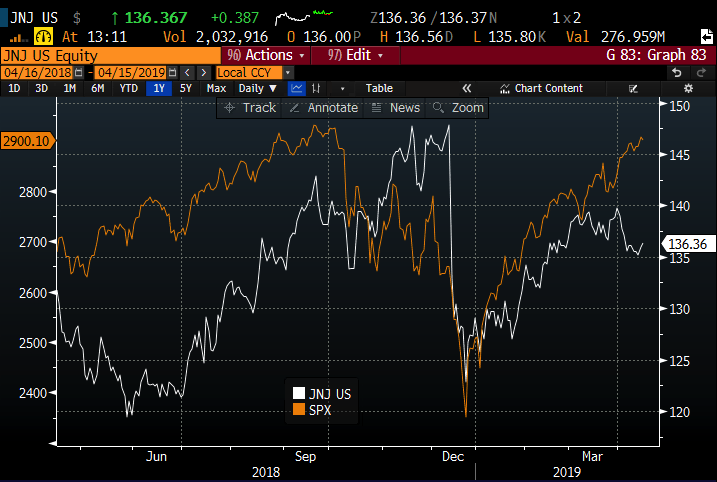 In a note to clients on April 11th, Credit Suisse’s pharma analyst Vamil Davin who rates the stock a Buy with a $151 twelve month price target suggested that the talc claim should take a backseat on the call:

While JNJ still has yet to fully recover from the sharp mid-December sell-off on increased concerns around the company’s talc powder liability risk, we expect the focus in 1Q to shift to questions around the Auris Health acquisition and ASP divestiture, both of which closed last week. We remain confident in the outlook of JNJ’s Pharma business, driven by Stelara, Imbruvica, Darzalex, Xarelto and Tremfya, as well as the newly approved Spravato (esketamine), with a potential 2019
approval for erdafitnib as well. However, we look for greater visibility in JNJ’s ability to turn around its Medical Devices and Consumer segments, especially considering the recent newsflow surrounding them.

Shares of JNJ trade at its lowest P/E multiple in a few years, trading a little less than 15x expected 2019 eps growth of 5% on a 1% yoy sales decline. The company has a pristine balance sheet with $20 billion in cash and $30 billion in debt on a market capitalization of $363 Billion. Despite that Wall Street analysts remain very mixed on the stock with 11 Buys, 10 Holds and 1 Sell rating. Some bulls might think the company is underleveraged and at the very least might consider adding to the share repurchase (which they last added $5 billion to in mid-December).

Literally, the ‘jury is still out” on their talc lawsuits, with some states finding’s in favor of the class while other states like New Jersey have ruled in JNJ’s favor. This overhang will likely persist for some time and could hamper their M&A prospects and their buyback ability.

The five-year chart of the stock below shows the two-year consolidation between $120 and $150 with the stock very near that mid-point: 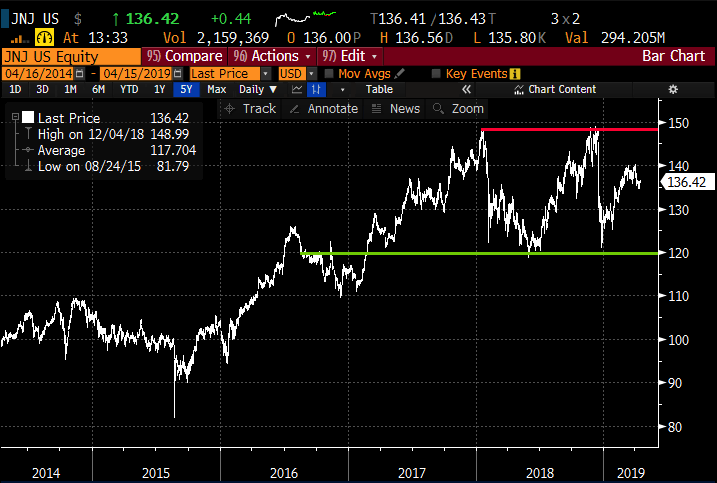 What’s the trade? For those with a directional inclination over the next couple months, possibly a move back towards the prior highs, or down towards the 52-week lows, short-dated options prices look attractive.

For instance, if you thought the stock could retest $120 in the next two months… this trade idea has an attractive risk-reward on an outright basis or possibly as a hedge:

Or If you thought the stock could make a run above $140, May out of the money call spreads look attractive:

Rationale: this trade idea risks less than 1% of the stock price, offering a payout of up to 4x the premium at risk, but the trade-off is that the break-even at 141 is up 3.3% while the max payout is up 6% from the current stock price. The risk-reward is just ok, but if you get the direction and the magnitude of the move right this could be the right way to play, especially considering the stock was $140 just two weeks ago.