346 people died in two plane crashes involving Boeing’s 737 Max plane since October. It was not until last month’s crash of an Ethiopian Air flight that investigators could draw a straight line to Boeing and the functionality of the plane to the reason for both crashes. This is truly a tragedy for all of those lost and their families who are left asking why their loved ones perished in a state of the art plane when it appeared that pilots had not been adequately alerted to safety features that could assist in avoiding such tragedy. Boeing has one job, make planes that don’t crash, aside from the occasional suicide pilot scenario. I suspect Boeing will not be able to sweep this under the rug anytime soon and may find uncomfortable regulations and fines and settlements that could reshape the companies financial well being for some time. Unfortunately for Boeing, aside from fixing what is wrong with the 737 Max, most of the remedies to their problems are out of their control.

Given the push out of the software fix the plane, and its global grounding to possibly June, on Friday the company announced they would be cutting production of 737 jets for the first time since the aftermath of September 11th, per Bloomberg:

By slashing output 19 percent — to 42 airplanes a month by mid-April — Boeing will be able to reduce its spending on the 737 and preserve cash.

In an attempt to quantify the financial headwinds for the company, Bank Of America Merrill Lynch downgraded the stock from a Buy to a Hold yesterday and cut estimates, per CNBC.com:

“The reputational loss from these events could erode long-term market share and pricing power of the 737 MAX,” BofA analyst Ronald Epstein said in a note to clients.

In addition to the initial 737 Max delays, BofA estimates it will take Boeing through 2021 to catch up to delivery orders for its aircraft.

I suspect we will see more cuts to ratings and estimates in the coming weeks/months and the fact that consensus is still calling for a 16% year over year eps gain in 2019 on a 6% sales increase possibly seems optimistic when you consider that there might not be demand by consumers to fly on these planes, which would cause airlines to keep them grounded and thus further production cuts. I am sure as shit not flying on one of them any time soon.

Oh and despite the stock being down 17% from its all-time highs made in late February, the stock is still up 15% on the year, and up 25% from its 52-week lows made in late December. The stock has merely filled in it’s late January earnings gap: 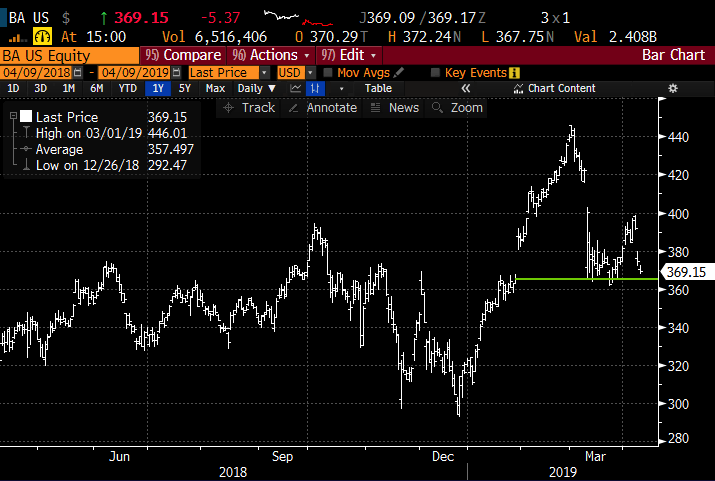 While I think there is more room to go on the downside, the stock oddly shows unusual relative strength in the face of so much uncertainty. Obviously, there are negative tape-bombs lurking everywhere, and the potential positive headlines that the company has instituted a fix and that the planes are free to fly again will take time to play out, and I suspect BA and airlines will wade back into the water slowly.

Which brings me to the XLI, the S&P Industrial Select etf which BA is the largest component at nearly 9%. Today there appeared to be vol buyers. When the etf was near $76, there was a buyer of 3000 of the May 3rd weekly 76 strike straddle (call and put of the same strike and the same expiration) for $2.40. This strategy is generally done when a trader feels that options prices are too cheap and that the underlying has the potential to move greater than what the options market is implying between the purchase and the expiration. In this scenario, the trader is making a bet that the stock will be above $78.40, or below $73.60 by the close on May 3rd.

The choice of May 3rd expiration might be to catch BA’s highly anticipated Q1 earnings on April 24th, and the choice of the 76 strike is interesting as it appears the etf ran into a little technical resistance just above that level: 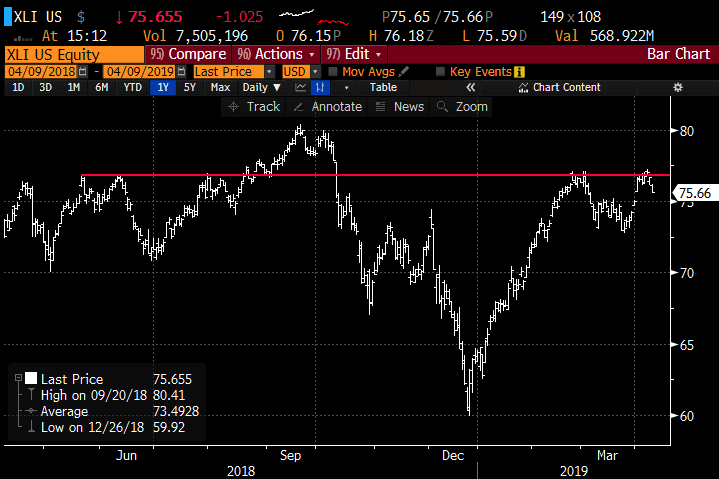 And if we look at the chart dating back to its all-time highs made in early 2018 that level also corresponds with the downtrend: 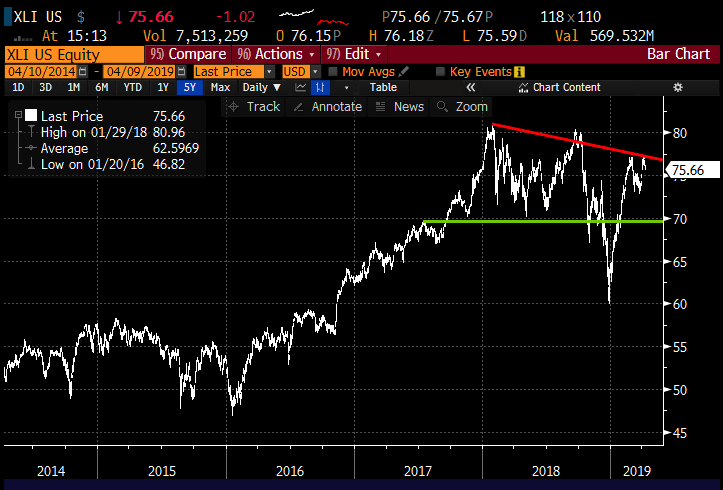 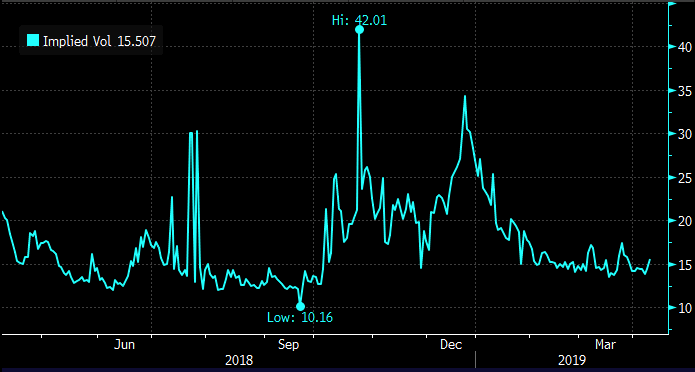 If I were inclined to play for a pullback in Industrial stocks I might consider the following put spread in May expiration that will capture most of its top ten holdings (which make up 45% of its weight):

Rationale: this trade idea risks less than 1.5% of the etf price with a break-even down 2% with a max potential payout of 4x the premium at risk if the etf is down 7.5% in the next 5 weeks. This trade has a very favorable risk-reward when you consider how far the market has come this year, how many headwinds to trade exist and the potential volatility of earnings season.