Last night on CNBC’s Fast Money program we discussed Delta Airlines (DAL) business update which sent the stock soaring to the tune of 6.5% yesterday with some impressive follow through today, capping a five day 15% bounce: 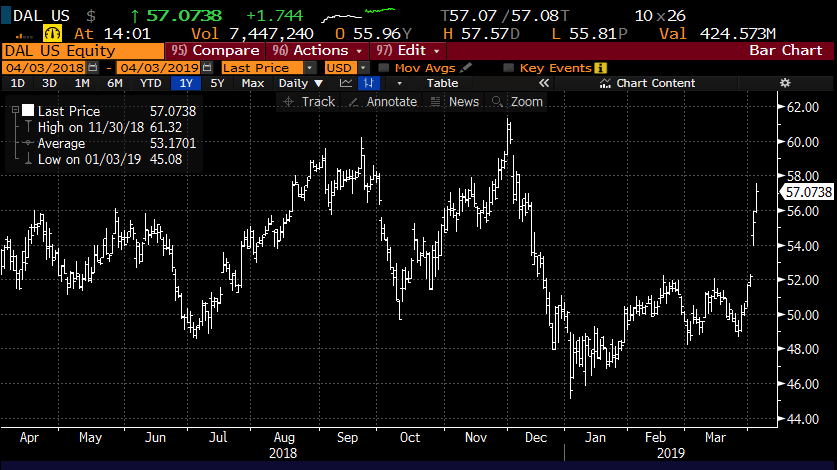 Until last week, most of the airlines had sat up much of the broad market’s gains, but in the clip below I addressed what this might mean for the transportation group as a whole:

The IYT, the etf that tracks the Transports is heavily weighted to rails and freight delivery, with the top 5 holdings making up nearly 45% of its weight:

As I mentioned in the clip, the IYT this week broke-out above the downtrend that had been in place since its all-time highs made in September, having bounced last week off of technical support at $180:

It is worth noting that the rail stocks, NSC, UNP, KSU & CSX, which make up more than a third of the etf’s weight have all either made or are flirting with new 52-week highs this week, while the IYT remains 9% from its Sept highs: 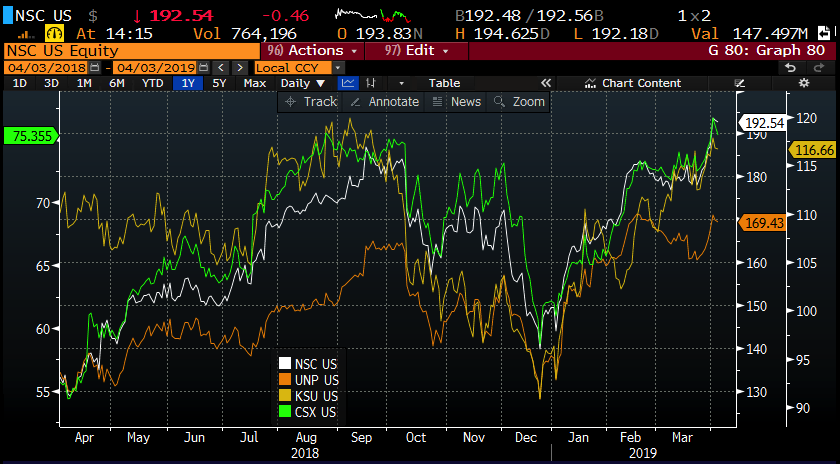 Which brings me to the president’s threat to shut down our border with Mexico, which could be a near-term disaster for the rails with heavy exposure to trade with Mexico (Cross-border traffic represents about 11 percent of Union Pacific’s total volume and nearly 30 percent of volume at Kansas City Southern). If we were to see an abrupt closure, I suspect it could have the sort of adverse effect that the government shutdown in Dec/Jan had on our GDP, and at least from a sentiment standpoint, market participants might shoot first and ask questions later.

As for the IYT, if it were to lose the leadership of the rails, then the recent resurgence in Airline stocks are not likely to help that much on the margin given their generally low weight in the etf.  To my eye I see about $9 up to about $200 resistance and about $11 down to about $180 support: 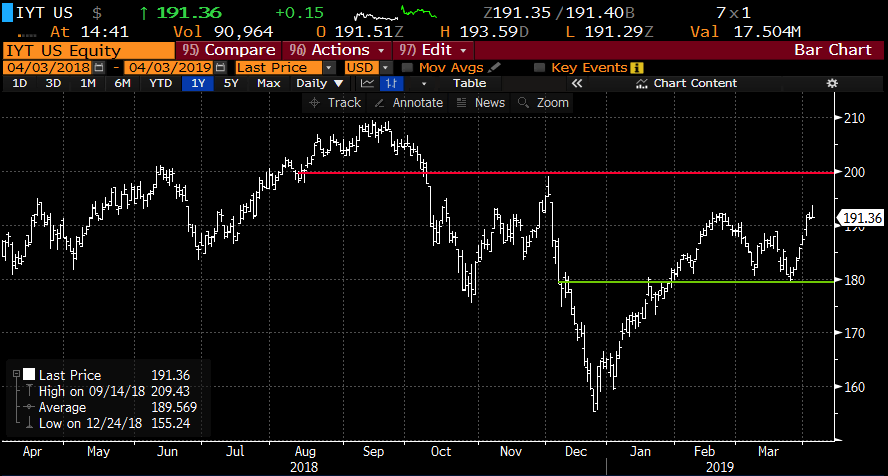 It is worth noting that the options market sees about $9 in movement in either direction between now and May expiration, with the IYT at $191, the May 191 straddle (the call premium + the put premium) is offered at about $9, if you bought that and thus the implied movement you would need either a rally above $200, or a decline below $182 to make money. This implied movement lines up pretty neatly with the technical levels above.

I would also add that for those with a directional view, options prices in the IYT appear fairly cheap with 30 day at the money implied volatility (blue line below, the price of options) very near the 52-week lows while realized volatility (white line below, how much the etf has been moving) starting to pick up, possibly making long premium defined risk trades look attractive.

I would add one disclaimer, options in IYT trade by appointment, they are thinly traded and have wide bid-ask spreads, so generally unattractive, but I wanted to highlight the divergences within the group and the risks that might emerge if the U.S. -Mexico border were to be shut down for a sector that some market watchers think is very important when gauging the health of market rallies.