On the opening, this morning shares of Shopify (SHOP) the Canadian provider of cloud-based e-commerce solutions dropped 3.5% in a straight line on a story by The Information that Microsoft Considers Creating a Shopify Competitor: 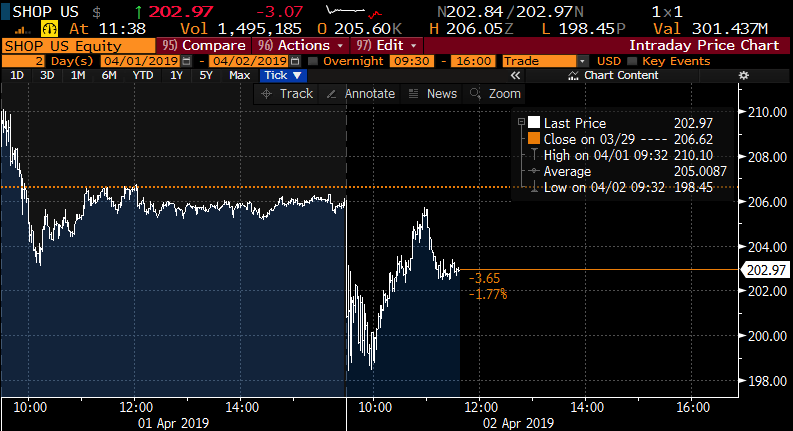 In the article, Shelley Bransten, Microsoft’s corporate vice president of retail and consumer goods suggested the company is:

“considering offering software tools that allow retailers to manage e-commerce sales…It’s something we’re looking at very seriously because our customers are asking us for it,” she added, noting she has “a lot of respect” for Shopify.

You can see from the chart that the stock has recovered much of the quick losses, possibly having to do with the ol questions whether to build vs buy in the article:

Part of her job is helping Microsoft figure out when to build new products and when to buy them through acquisitions, she said. Asked whether the company has considered buying Shopify, Ms. Bransten declined to comment.

The Information suggests that MSFT’s interest in a cloud-based e-commerce solution has to do with its competition with Amazon’s (AMZN) AWS suite of offerings:

such an effort could strengthen its efforts to cater to retailers, some of whom have grown hesitant about buying cloud services from Amazon Web Services, Amazon’s dominant cloud computing service, due to concerns about growing competition from the Internet retailer in their main businesses. In a meeting earlier this year with editors, the company’s CEO Satya Nadella spoke of Microsoft’s “clean business model” as an attraction for cloud customers.

But there are others that MSFT expects to square-off against in the coming cloud-wars:

Shopify could soon face even more competition. Instagram announced last month that it has begun testing a checkout feature for retailers that will allow users to buy items without leaving the Instagram app. For now, the program is only open to select brands in a private test.

Shares of SHOP are up an eye-popping 47% on the year, and up 73% from its Christmas lows having just made an all-time high yesterday. 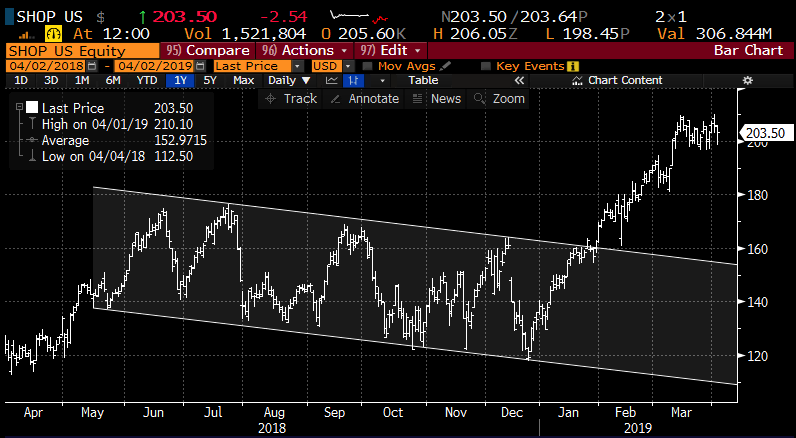 SHOP’s chart is pretty interesting, prior to its near parabolic run this year, the stock was in a fairly well-defined downtrend from its prior all-time highs, making a series of lower highs and lower lows. The stock’s recent consolidation over the past month in and around $200 is nothing short of impressive for a company that trades over 200x expected 2019 adjusted earnings, which on a GAAP basis is a loss equal to $101 million on an expected $1.48 billion in sales. The company’s stock is trading at these levels because of sales growth that has been between 59% and 90% over the last three years and expected to be 38% this year. But the stocks multiple to sales at about 15x makes it a very hard acquisition target for anyone, especially when you consider that it would likely take a 30% premium from current levels. It seems that the “MSFT to Buy SHOP” might be embedded in the stock price here… of course, I have no idea, but I do recall that investors were shocked back in 2016 when MSFT paid $26 billion in cash for Linkedin, or about 7x their 2016 sales.

So what’s the trade? You would have to be nuts to short a stock like this, but looking at the next identifiable event, Q1 earnings in the last week of April, then you might consider a defined risk play for a move back to the recent breakout level near $160. I don’t have strong conviction on this idea, but this trade sets up decently for those who think the company could miss and guide down when they report in a month:

Rationale: this trade idea risks 5% of the stock price, offers a break-even down 6% with a profit potential of up to 15% if the stock is back towards 160 in a month and half.