Global equity markets today are cheering a pickup in Chinese manufacturing data in March, per Bloomberg:

The manufacturing purchasing managers index rose to 50.5 from 49.2 last month, the biggest increase since 2012 and exceeding all estimates by economists. Both new orders and new export orders – leading sub-gauges that signal future activities — rose to the highest levels in six months.

Before we start to embrace the calls for “green-shoots” in the Chinese economy, it might make sense to put last month’s data in some context, per Bloomberg;

New export orders are still contracting even after the pickup from the lowest level in a decade in February. In addition, the rise in the March data may overstate the actual increase in activity, as the Lunar New Year holiday in February weighed down the data then”

“The official manufacturing PMI has never dropped in March since it was introduced in 2005, and the pickup this year “isn’t particularly big,” comparing with the average rebound in the past decade”

And as my friend Peter Boockvar, the CIO of the Bleakley AdvisoGroupupp and author of The Boock Report, wrote this am:

The China data helped to shift attention from another mixed batch of economic news elsewhere. Japan’s Q1 manufacturing Tankan report saw a 7 pt q/o/q decline to 12. The estimate was 13. The outlook also fell by 7 pts to just 8, 4 pts below the estimate. There was also weakness in services. The manufacturing indices for small companies also deteriorated. Also, capital spending plans slowed to almost nothing, up by 1.2%.

South Korea said its March exports fell by 8.2% y/o/y, a slightly deeper fall than the drop of 7% expected. Imports fell almost 7%. It’s PMI did improve by 1.6 pts but is still below 50 at 48.8. South Korea is a great proxy on global economic activity.

Taiwan’s manufacturing PMI did rise almost 3 pts but is still below 50 at 49.

The Eurozone manufacturing PMI for March was revised down a hair to 47.5 from 47.6. Germany’s PMI was revised down to just 44.1 from 44.7, deeply below 50. France came in at 49.7 and Italy was at 47.4. Spain was a bright spot, rising 1 pt and back above 50 at 50.9. Markit said “The March PMI data indicate that the Eurozone’s manufacturing sector is in its steepest downturn since the height of the region’s debt crisis in 2012. The survey is indicative of output falling at a quarterly rate of approximately 1% in March, suggesting that the January rebound from one-off factors last year seen in the latest official data is likely to prove short-lived.”

The Shanghai Composite has rallied 5.5% in two trading days, approaching its 52-week highs, and up 30% from its January lows: 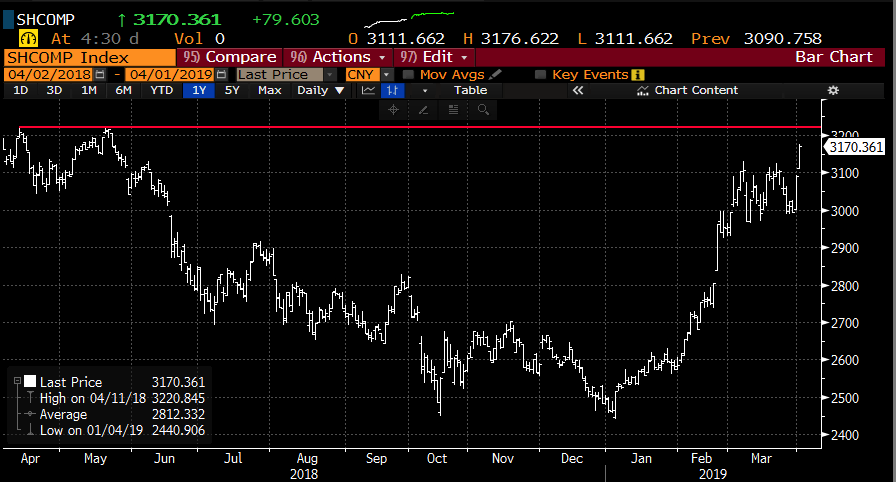 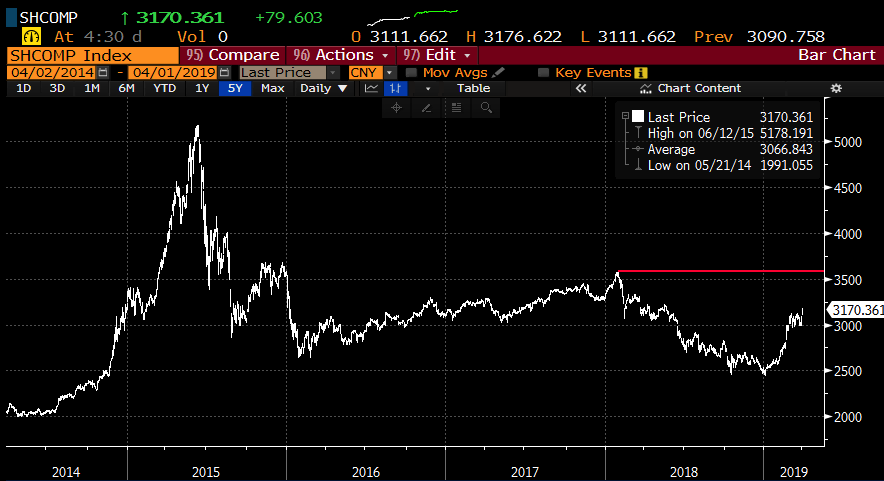 I guess the big takeaway from the data overnight is that plugging the hole in a sinking boat is not exactly right the ship, and rising tides (or at least stabilizing seas) might not lift all boats. But if there were to be a trade deal soon (maybe by end of Q2) and the U.S. were to lift their $200 billion in tariffs on Chinese goods, then we should see a decent rebound in economic activity across Asia, and possibly then start to see some stabilization in Europe.

One way to express the “green shoots” and “rising-tides” view would be with the EEM, the iShares Emerging market etf where the top 4 holding make up 15% of the weight, per Bloomberg:

Chinese equities actually make up 33% of the weight, tack on South Korea and Taiwan and you get to nearly 60%. 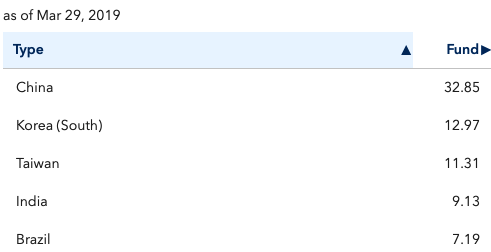 You get the point, China is driving the train, and their biggest trading partners are right behind them.

The chart of the EEM dating back to the start of 2018 shows what was a very well defined downtrend, which was finally breached in early January, which after about a 10% bounce consolidated between $42 and $44 for the better part of two months: 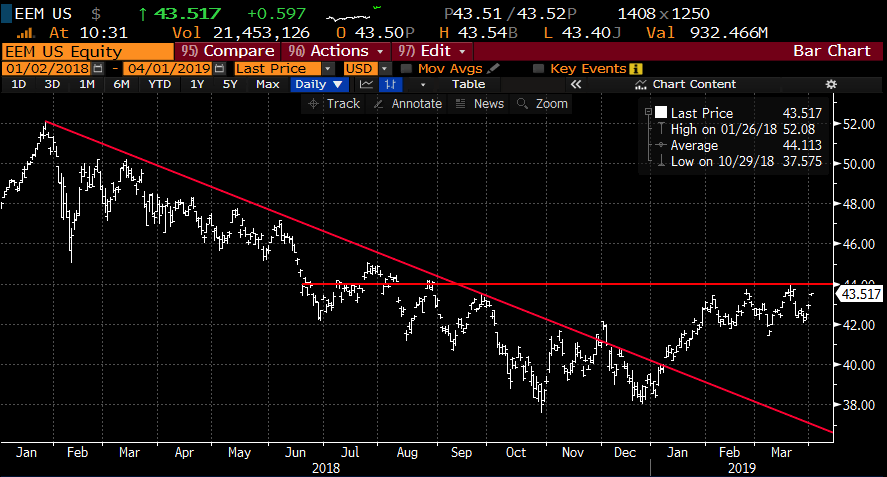 A breakout above $44 could yield a move back to the high $40s in the coming months.

Short-dated options prices are very near the lows of the last 12-months, with 30-day at the money implied volatility (blue line below) just above 16%, just below 30-day realized volatility (white line below, how much the etf has been moving), possibly making option prices look cheap for those looking to make directional bets:

So what’s the trade? I by no means want to jump on the bandwagon of one piece of data from a country that is throwing a ton of stimulus towards their economy while they are faced with a very uncertain path as it relates to a trade deal with the U.S. But for those looking for a way to play for a turn in the Chinese economy, even the slightest reacceleration which would likely stimulate the balance of Asia, then EEM calls or call spreads might pose an attractive way to do it, with defined risk.

Rationale: this trade risks less than 3% of the ETF price while playing in for a technical breakout near important resistance in front of potential trade catalysts. The options market is saying there is about a 33% chance that this trade is break-even on June expiration in a little more than two and a half months. This trade idea also allows for the potential to reduce the premium at risk by selling an out of the money call in June on a rally, turning the long call position into a vertical call spread.