For four weeks from mid-February to mid-March my 13 and 15-year-old daughters were in a paper-trading stock competition with ten of their girlfriends set up by one of the mothers. My 15yo Alex won with 14 trades and a 28% return on an initial $10,000 (play-money) in investable capital, most of those gains from just one trade.

Trust me, there is nothing in the water in our home… Alex and I merely put in practice a process that I detailed to all of the girls at the onset of the competition as the best way in going about winning a game where you have defined risk (the entry fee) but the potential for an exponential gain (the cumulative total of all of the entry fees), from my Feb 14th email to the group:

It was interesting to see what some of the girls did in the trading portfolios… there were lots of buys and holds of AAPL, LULU, SNAP, AMZN, SPOT, ULTA, etc… using the ol Peter Lynch style of investing, but these girls while investing in what might be risky names were playing it safe actually. The returns for the game would be not be annualized for the month, so it was an absolute return game, and to win it would take some gambling, risking the $50 entrance fee to possibly make $500. So Alex who is very competitive and likes to win most things that she engages in keyed in on the main point of my email and asked me to start looking at the earnings calendar with her and daily we discussed companies set to report. The first thing we looked at was how the stock had been performing on an absolute basis, rallied from its recent lows, how far from its 52-week highs. Then we would consider analyst sentiment, short interest, and then discuss expectations. These inputs were, and probably remain fairly foreign to Alex, but the main reason our friend set the game up was to get our kids familiar with the stock market and start conversations like this, with the hope that it sparks greater interest among the kids. After some deliberation, looking at charts we were basically looking for stocks that had the potential to meaningfully outperform expectations.

With just a few days left to the March 15th deadline, Alex was up a few percent and sadly in 5th place, the earnings trading strategy had basically been a wash, she had a couple of big winners, a couple of big losers and a lot of nothing in between. But then we took a closer look at MongoDB, ticker MDB, a cloud-based open-source enterprise software company scheduled to report its fiscal Q1 earnings on March 13th, trading up 20% on the year, and very near its all-time highs made in February.

Analysts were pretty mixed on the stock despite its outperformance, and massive relative strength during the Q4 sell-off, and with 21% short interest, this stock seemed poised for a massive breakout on an unexpected beat and raise. So Alex went all in, being in 5th place and nothing to lose:

And like that, the company issued a beat (a smaller than expected loss, and a greater than expected sales gain) and the stock was trading at new highs on the opening, up a whopping 23%!

Needless to say, Alex in an effort not to be greedy, sold on the opening for a cool $2300 gain :

The moral of this story is NOT to turn your investment/trading program into a casino. She got very lucky, she did have one stock (ELF) that was down 21% the prior week… Regular readers know that we often give the following disclaimer when detailing long premium directional options trades into events like earnings; ” you need to get a lot of things right to merely break-even, direction first and foremost, but also the magnitude of the move and timing”. Now trading stocks into earnings is a little less fraught with those constraints, but also had more risk to the downside.

I’ve not looked at MDB since the game ended ten days ago, and frankly, I was shocked to see that the stock kept running… at its recent highs last week the stock was up a whopping 50% from its earnings night: 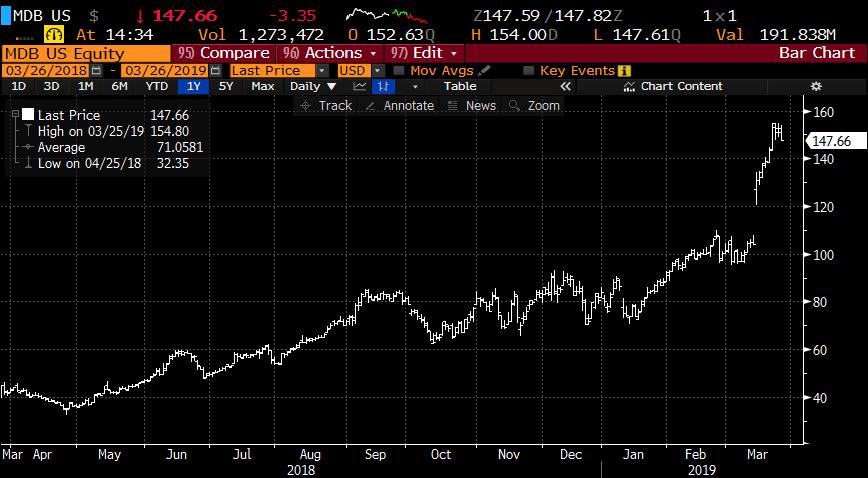 This for a company that had a GAAP net income loss of $99 million on $253 million in sales in FY 2019 just ended and $101 million loss on an expected $370 million. While the loss stays fairly similar, sales are expected to grow by more than 40%. This stock trades at the astronomical sum of 21x sales, there is NO buyer for a money-losing company at this multiple.

Since the earnings gap, short-dated options prices have come in hard, with 30-day at the money implied volatility at 50%, implying daily moves of low single digits %.

With the stock just below $150, the May 150 straddle (the call premium + the put premium) is offered at about $23, if you bought that, and thus the implied movement between now and May expiration, a little less than 2 months, you would need about a 15% move in either direction to make money on May expiration.

If I were inclined to make a near-term bearish bet, looking to play for a bit of a retracement of the post-earnings move, I might consider a put butterfly targetting a move back to the gap level of $120, looking to sell options at that level, for instance:

Rationale: this trade idea looks to take advantage of selling 2 out of the money puts near the target price to help offset the decay of the near the money put that this trade is long. risking 4 to possibly make 16 if the stock is back towards the recent breakout in a little less than 2 months.