On February 15th, when shares of Nike (NKE) were near $85, and threatening a new all-time high, I detailed reasons why I thought their upcoming guidance would disappoint and why the stock might be on the cusp of making an epic double top (Nike – Involved in a Trade War in Asia?

If trade negations were to take a turn for the worse, investors might start to reconsider the potential for follow-through of the positive commentary that NKE last gave on their Q2 earnings call on December 20th (when the stock was in the high $60s). What stuck out from their Q2 results was the 31% year over year sales growth in China, 14% sales growth in Europe and the Middle East, and the 9% sales growth in North America. I guess what’s important here is the timing of their earnings and guidance, a couple days before the U.S. government shutdown and two weeks before Apple’s massive revenue preannouncement that was largely blamed on weak sales in China. NKE gets 60% of their sales outside the U.S. and the combination of trade tensions weighing on the global economy and the strength of the U.S. Dollar, any lack of clarity on the withdrawal of tariffs might start to weigh on U.S. multinationals like NKE. Oh and NKE trades about 32x the current fiscal 2019 eps estimates for growth of 12% and 27x FY2020 expected eps growth of 18%, which might be a tad high given the start of the global economy.

I also discussed this idea on CNBC’s Options Action that afternoon and laid out a bearish trade idea:

Well, the company did disappoint on guidance, but the stock also rallied a few percent in the weeks prior, and now the stock is back at $82.15, the level this trade idea would be at break-even on April expiration in a few weeks. This trade that cost $2.50 when the stock was $85.25 is now worth $3.40 at current levels for an 80 cent profit.

So what to do? the stock clearly failed at a breakout on fundamental news: 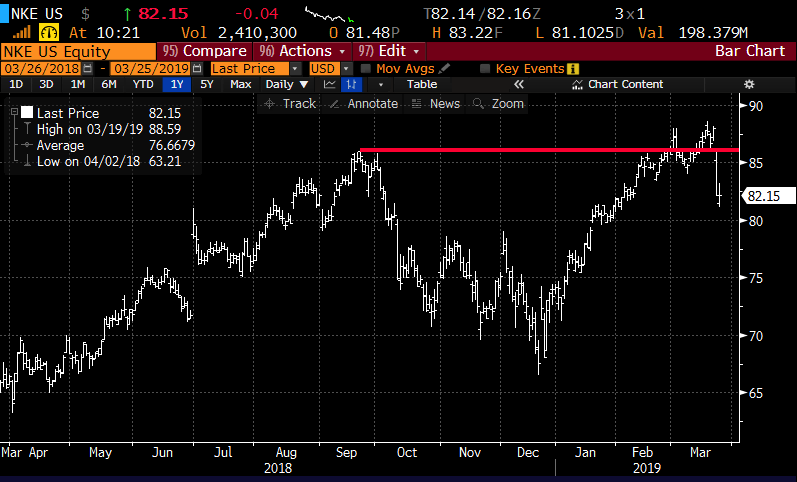 But at this point, the news is out, and it would take a broad market sell-off or some sort of further negative turn in our trade war with NKE for investors to continue to sell the stock down into the $70s in my opinion. Given the fact that the catalyst that I identified is out of the way, and now it is just a market call, I don’t think the risk-reward owning this spread exists, basically risking about $3 to maybe make about $3, but if the stock were to consolidate here the risk-reward only worsens in my opinion. I would take the 80 cent profit (beats a sharp stick in the eye) and maybe roll those gains into an out of the money put spread, like the April 81.50 -78 put spread which costs 80 cents (stock ref $82.15). At this point, you will only be risking the gains of the trade playing for the stock at $78 in 3 weeks, or another 5% lower. Risking 80 cents to possibly make $2.70