Micron (MU) will report their fiscal Q2 results tonight after the close. The options market is implying about a 7.5% move between now and next Friday’s close Most of that for the post-earnings reaction. With the stock around $40.40, the March 22nd weekly straddle (the call premium + the put premium) is offered at about $3, if you bought that and thus the implied move you would need a rally above $43.50, or a decline below $37.50 to make money. The stock has moved about 4.8% on average over the last four quarters, and about 6.7% the day following earnings over the last ten years.

Over the past two weeks, Wall Street analysts have had a bit of a sour tone on DRAM and NAND prices heading into MU’s earnings next week, last week saw two estimates cuts, per Barron’s:

-On Friday, Piper Jaffray analyst Harsh Kumar followed suit and cut his profit estimates for Micron for this year. He reaffirmed his Neutral rating on the shares.

“We suspect ASP [average selling price] erosion and market oversupply, specifically in DRAM, are likely to persist into the second half of the year,” Kumar wrote. “Industry trends suggest that things could get worse from here.”

And two more this past Friday, per Bloomberg:

-BofAML cutting its expectations for the next three years and Cross Research downgrading the stock to hold.

BofAML slashed its profit expectations for 2019 through 2021, with 2019’s view going to $6.89 a share from $8.53. “Like Samsung and Hynix, Micron too suffers from price drops and, thus, margin squeeze,” wrote analyst Simon Woo. He maintained his buy rating and $50 target on the stock, but expects average selling prices for both DRAM and NAND chips to decline more than 20 percent on a sequential basis in the second quarter.

Cross Research analyst Steven Fox also cut his earnings estimates on Micron for 2019 and 2020; he added that this was the third time he had done so in the past six months, and that he doesn’t expect positive earnings growth for another four
quarters. Average selling prices for DRAM chips suggest “we underestimated the extent of excess DRAM inventories (and probably NAND as well),” he wrote, adding that excess inventories would also “limit gross margin recoveries” at
Micron.

reiterated his Outperform rating for Micron stock, citing the cheap valuation of its shares.

On Micron’s December earnings call, the company said it saw a decline in demand from its cloud computing customers. Near-term memory “shipments are well below bit consumption and against the backdrop of U.S. cloud [demand] returning in April-May time frame, supply/demand is improving and at equilibrium exiting CY19,” Pitzer wrote. Micron’s “valuation remains attractive.”

The analyst noted the shares are trading at 3.4 times forward enterprise value to Ebitda [earnings before interest, taxes, depreciation and amortization] versus its historical average trough of 7.6 times.

Valuation has been a tough way to trade MU, as the stock at its recent highs was still trading well below a market multiple and that of all of its peers in a large part due to the highly cyclical nature of memory.

Shares of MU might be at a technical inflection point though, once again in that resistance zone between $40 and $50, your guess is as good as mine which way it breaks: 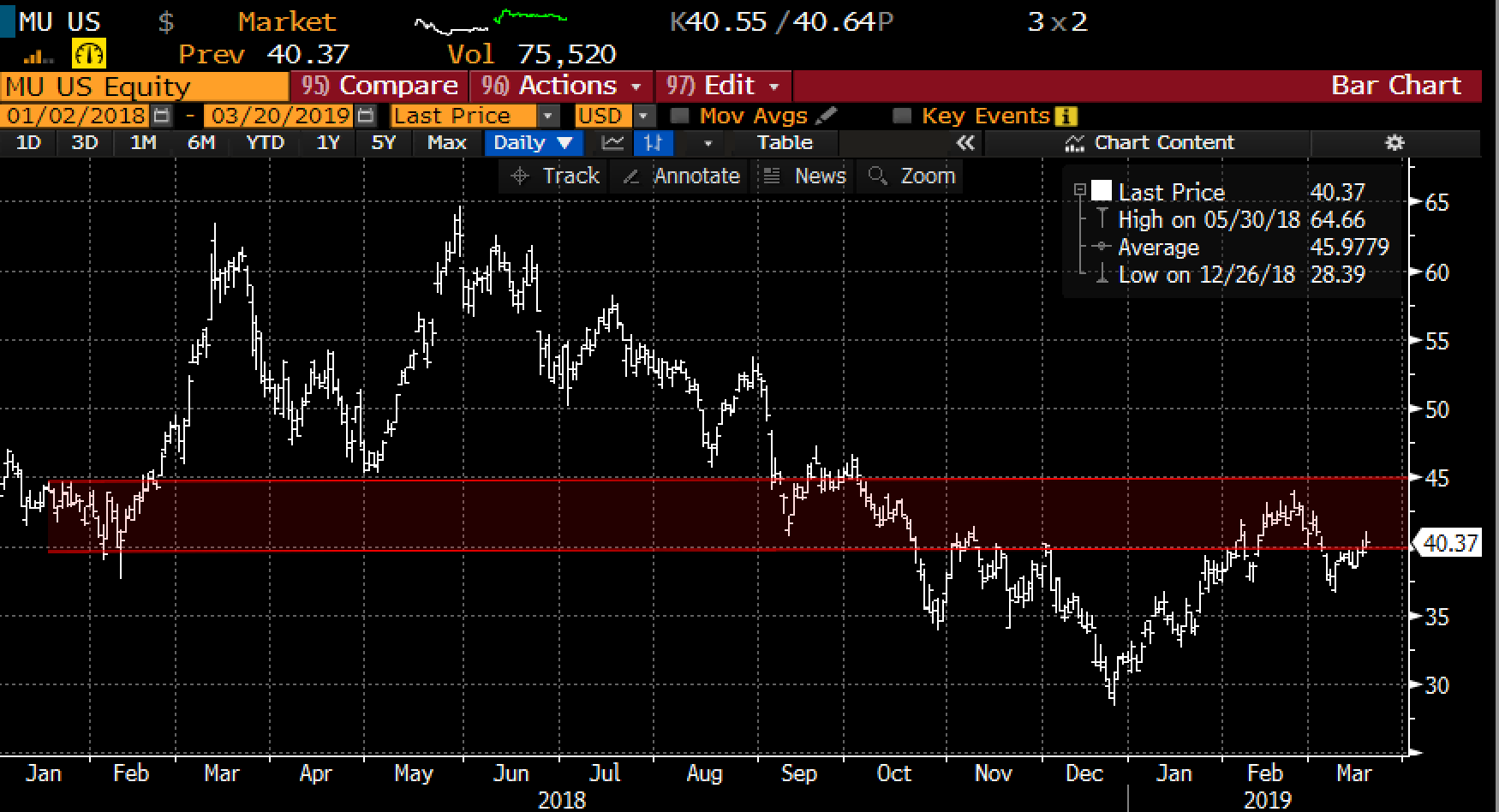 So what’s the trade?  (*See comment below on timing of earnings trades on day of)

If I were inclined to play for a move in line with or greater than the implied move to the upside, I might consider a weekly call spread, knowing that I am risking what I am willing to lose, get the direction wrong and it is a binary trade, lose most the premium… for instance:

Rationale: this trade idea risks 2.5% of the stock price to possibly make up to 7.5% in two trading days from the earnings event, a little more than the implied movement in the options market. The way semi stocks have been moving of late if the company posts a beat and raise the stock should be up at least that, and depending upon one’s conviction level, a call spread could be a bad move, selling an out of the money call for less than 1% of the stock price. This would be more of an issue if you were considering a longer dated call spread where the trade had more time to get going.

If you thought the stock’s recent bounce incorporates any good news the company will offer on the call, and that the uncertainty around dram and nand pricing will persist into the spring (which I do) and the stock might be on its way back towards recent lows (which could be possible depending how bad the guidance is) I might consider a put spread looking out a couple of months, for instance:

Rationale: this trade idea risks 5.5% of the stock price over the next two months but also includes a potentially volatile earnings event where the implied one-day movement is at least that. This trade idea gives a bearish thesis some time to play out, but also focuses on the one name that has massively underperformed its peers from the 52-week highs and very well might be the one company that could halt the broader semi rally with its guidance…. that said it could also fuel the SOX to new highs if the company posts a beat and raise, which is why bears should define their risk.

*Regular readers know that we think it is a very difficult task to routinely make long premium directional trades using options into events like earnings, as you need to get a lot of things right to merely break-even; first and foremost direction, the magnitude of the move and timing. But I will add that from my experience it makes the most sense to place these trades the day of and near the close prior to the earnings. We chose are strikes largely based on the implied move and what a trade would need to at least break-even during the selected time period, so having a large move against you prior to the event hurts your chances of success on the event.