FedEx (FDX) will report their fiscal Q3 results Tuesday after the close. The options market is implying about an $11 move or about 6% in either direction between now and next Friday, most of which is for the post-earnings reaction. The stock on average has moved about 5.4% over the last 4-quarters, which is rich to its 10-year average one-day post-earnings move of about 3.7%. I will add that in mid-December FDX stock dropped 12% the day after reporting poor results and guidance, per Credit Suisse on Dec 18th, 2018:

The guidance was cut by 8% at the midpoint, and the Express profit improvement target of $1.2B-$1.5B is off the table for FY20 – with no commitment to a date in which it could be achieved. We think this is worse than the market expected…and the commentary that global trade is deceleration will likely serve as confirmation of macro fears

Although far from a surprise, we got confirmation that global growth has peaked – and while trade rhetoric is undoubtedly a major factor contributing to weaker economic growth, perhaps the more concerning element at play for FDX’s international biz is the material mix shift at legacy TNT toward lower margin traffic. For this reason we are admittedly less constructive on the stock. However, if we operate under the assumption that global growth is headed for a slowdown – as opposed to an outright recession – we think there is reason to believe that the stock could be close to washed out.

Maybe last quarter’s cut to guidance was to a level that is achievable, but when you consider some of the headwinds the company faced in Mid December, they all still exist, slow trade with China given tariffs, weak Europe with Brexit overhang, a strong dollar, except the government shutdown which had not happened yet. I suspect all of the above adversely affected FDX results in the quarter and the lack of clarity on a trade deal with China likely cements further lack of visibility. At an analyst meeting in January, the company largely blamed the Q2 miss on macro conditions.

And the hits keep coming, in February 42 year FDX vet, President/COO Don Bronczek abruptly retired leaving some investors questing who would be next in line to replace founder Fred Smith.

Interestingly from a technical standpoint, the stock found some resistance at the December breakdown level near $185: 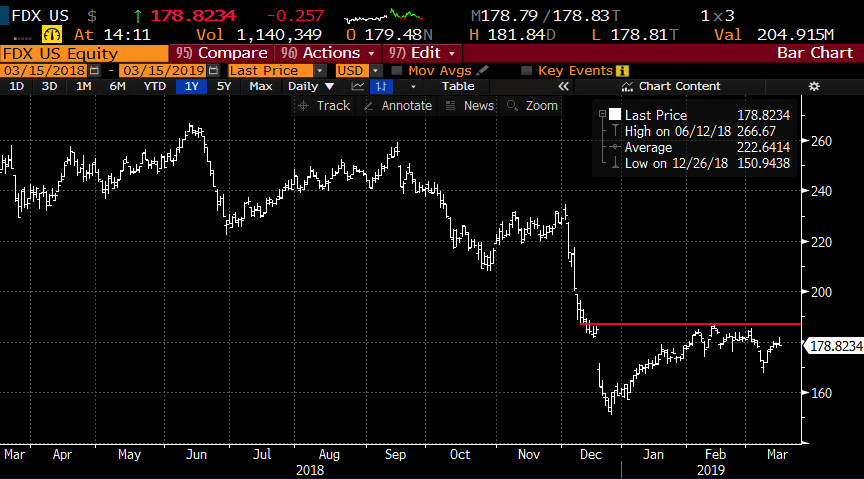 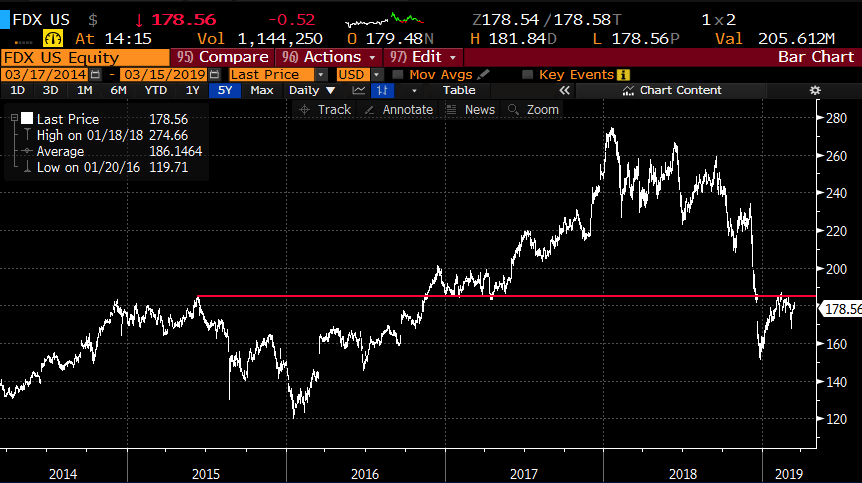 Shares of FDX are cheap trading to its history at 10x its expected 2020 eps growth of 11%. 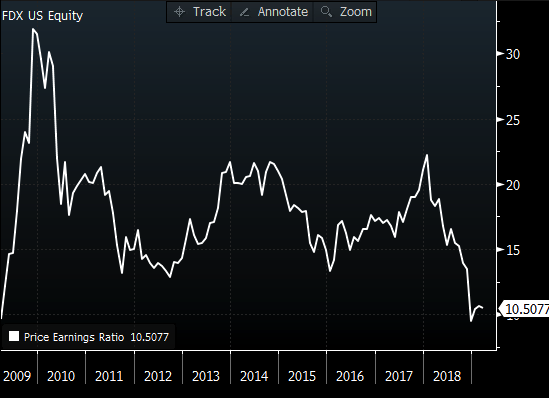 When the company reports next week I think there is a decent chance the company has another weak guide and the small likelihood that there was a material beat in the quarter ended. From my perch, I suspect there is one more sloppy report and guide and it may make sense to target a move back towards the December lows in the next month.

Rationale: this trade idea risks a little less than 2.5% of the stock price with a break-even down a little less than 5% from the current level with the profit potential of 4x the premium at risk. If you are convicted that FDX will once again miss and guide lower, this trade would look to capture a move back towards the Dec lows.