Tonight after the close Oracle Systems (ORCL) will report their fiscal Q3 results. The options market is implying about a 5% one day move tomorrow which is a tad rich to its 4 quarter and the 10-year average one-day post-earnings move of about 4.5%.

Shares of ORCL are up about 18% on the year, outperforming the 12% ytd gain of the S&P 500 (SPX). ORCL is within 1% of its 52-week and all-time highs made yesterday. To suggest that the stock is at a key technical level is an understatement, back towards the prior all-time high made a year ago, prior to the stock imploding on their disappointing Q3 results and 4th qtr guidance. The stock then was also threatening to break out to new all-time highs after a multi-month rally from the 52-week lows: 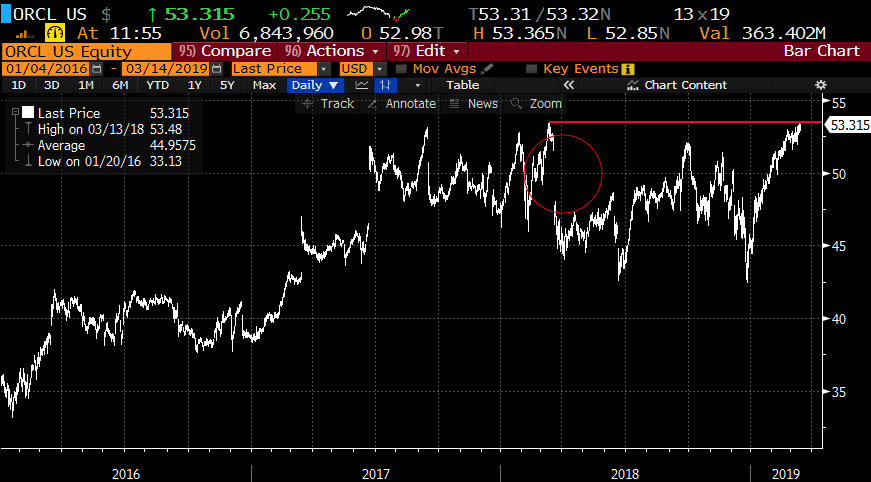 Wall Street analyst sentiment is very mixed, with 14 Buy ratings and 21 Holds and 4 Sells. It appears that analysts are more comfortable with high growth, high valuation stocks that are up massively as opposed to a stock like ORCL that trades just about 14.5x on 8% expected fiscal 2020 eps growth on 2% sales growth and has bought back $20 billion in stock over the last six months. ¯\_(ツ)_/¯

ORCL co-president Mark Hurd spoke at the Goldman Sachs Tech Conference on Feb 13th and had the following to say about forward guidance:

“I stand by my statement on second half ’19. I think 2020 growth rate will accelerate from 2019 growth rate. So there, I gave you new data. So I think that, again, this is a phenomenon of our growth businesses are a bigger
percent of our total.”

The stock is up about 4% since then in line with the performance of the Nasdaq Composite.

Credit Suisse’s software analyst Brad Zelnick who rates ORCL a Buy with a $60 twelve month price target highlighted in a note to clients on March 11th what he sees as the positive data points heading into the quarter:

-We continue to hear of healthy demand for licenses and support renewals, with cloud contracts mostly driven by SaaS demand. We’ve picked up evidence of customers consuming cloud credits, and in some cases driving early renewals to re-up on additional credits. Our conversations suggest Oracle maintained its pricing discipline into quarter end, but instead was more flexible on contract terms and conditions. We tracked several multi-million dollar deals being executed earlier than expected and at increased size, driven by the addition of DB options required for 12c deployments (though not cannibalizing F4Q pipeline). We picked up Oracle more recently emphasizing and investing in its cloud partner program

-While we expect FX remains a y/y headwind, a weaker USD since guidance reduces the F3Q impact by ~50bps, resulting in a ~3pt headwind vs 4pt guided. For F4Q, we expect a >3pt FX headwind y/y, though 20bps better than at the time of the F2Q earnings call.

Generally pretty constructive from CS. My view though is simple on the stock’s near term performance, it would take a material beat and raise to see the stock breakout to new highs in the sort of manner that would lead one to believe that the stock will establish a new range above what has been a two-year base between the low $40s and the low $50s.

So what’s the trade? If I were inclined to play for a retracement of some of the year to date gains, possibly back towards $48 in the coming weeks, I might consider the following put spread…

Or if I were inclined to play for a near term breakout above $53.50 I might consider the following call spread…

Rationale: this trade idea risks 1.5% of the stock price for 6 trading days into a potentially volatile event that the options market is pricing a 5% move in either direction. If one has a conviction on a move higher tomorrow this trade offers a decent risk-reward.

Ill offer our normal disclaimer for long premium directional trades into events like earnings, you need to get a lot of things right to merely break even, direction first and foremost, the magnitude of the move and timing.