Despite being positively disposed to some names (Intel from Jan 4th – Chip Rip?) I am not exactly sure the group is out of the woods just yet as the SMH, the semiconductor etf is approaching the downtrend from its all-time highs made last year, which might serve as near-term technical resistance: 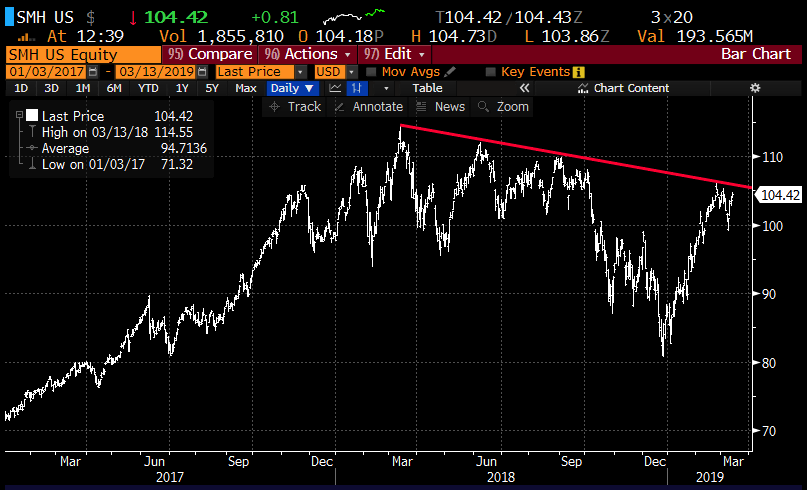 Semis were one of the first groups within tech to roll over last year, with a nearly 30% peak to trough decline from March to December, but has also sustained one of the sharpest rallies since late December when the market bottomed, rallying nearly 30%.

The risk near term in the group is that the early weakness in 2018 was caused by fear of supply disruptions caused by the then brewing trade war with China. Lots of demand for chips might have been pulled forward in the first half of 2018, which caused a serious inventory build that may have some time to work off. But as we get into the back half of 2019, and inventories are ok and if we get healthier demand as the foot on the global economy gets removed (tariffs) we might start to see the prospects of an upswing for economically sensitive groups like semis.

One name that I mentioned in the clip is Applied Materials (AMAT) which makes equipment for the manufacturing of semiconductors. AMAT was one of the hardest hit stocks in the SMH last year, plunging more than 50% from its March highs to its late December lows. The stock has recovered nearly a thrid of the decline, but has paused of late at one some might view as technical resistance near $40: 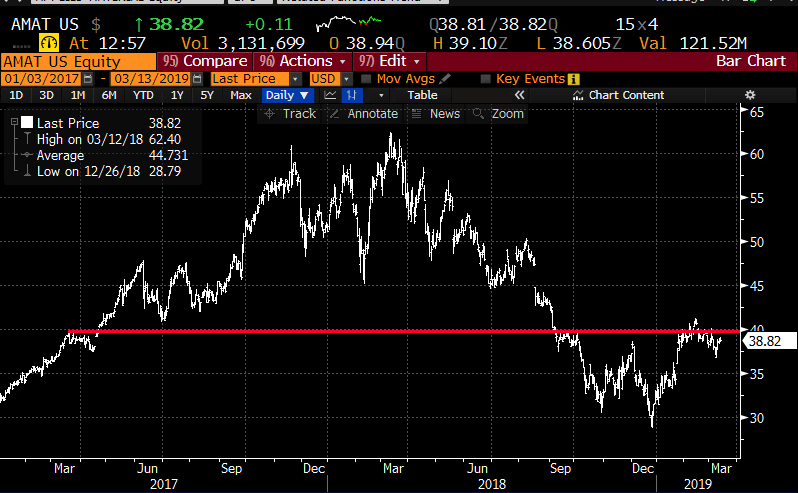 If we were to see a sooner than expected recovery in global growth, AMAT might be an attractive underperformer. And if that recovery comes from an expansive bi-lateral trade deal with China, we might once again see a flurry of M&A in the space.

So what’s the trade? Aside from any trade deal-related announcements (your guess is as good as mine when a deal gets done and whether or not it is a superficial one), the next identifiable catalyst for AMAT will be their fiscal Q2 earnings on May 16th, I might consider a couple of different defined risk trade ideas, looking to isolate the May earnings call that could serve as a positive catalyst for the shares.

First a set it and forget trade, May call spreads that capture earnings and a possible gap fill back near $47 following their Aug18 earnings.

Rationale: this trade idea risks 2.5% of the stock price for the next two months offering a break-even up 7.5% with a max profit potential of 10% if the stock is up 18% in two months. While the probability of max profit is quite low right now, this trade offers the potential to capture a wide range to the upside in the event that a broad market rally or stock specific news catalyzes a catch-up trade.

Second, another way to set up for an earnings surprise in May might be a call calendar, selling a short-dated call and buying a longer dated call of the same strike, for instance:

The ideal scenario is that AMAT stock is near 42 on April expiration and the short 42 call expires worthless or can be covered for a small amount and you are left long May 42 call for 60 cents or about 1.5% of the stock price.

The max risk of the trade is 60 cents on a sharp move lower than current levels or a sharp move above the $42 strike price.

These two trades take very different approaches despite having a similar break-even. I prefer the call calendar as it has more optionality in my opinion if the earnings event is what you are playing for.