Prior to this week’s broad stock market rally, last week was the worst week for most of the major averages in the U.S. down between 2% for the S&P 500 (SPX) and 4% for the Russell 2000 (RTY). On CNBC’s Fast Money I am often asked to give my best guess of where I think the market is going to go next and back it up with some observations that help me arrive at my conclusions. I have been very clear for months that the concentration of the largest mega-cap tech stocks which I call MAGA (MSFT, AAPL, GOOGL, AMZN) were the key on the way down, and that despite the healthy breadth off of the December lows, the only way we would make it back to new highs is if MAGA were to lead the way. This week we have seen a healthy surge in the AGA (MSFT has been showing impressive relative strength to the other three), but interestingly we are still struggling with 2800 resistance in the SPX: 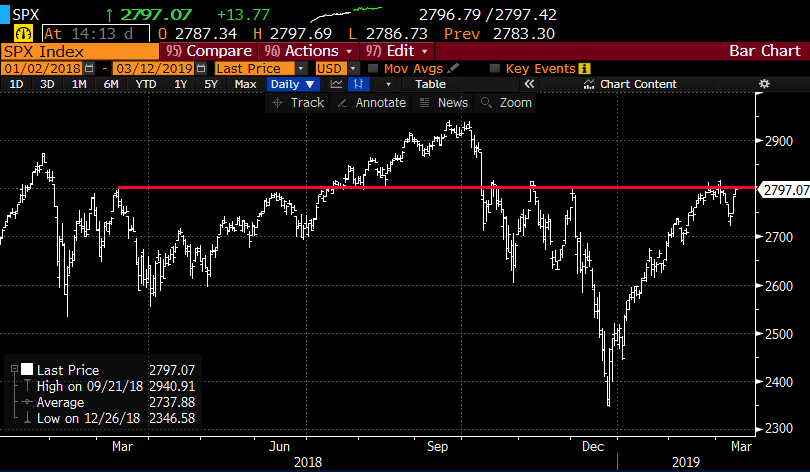 Another group that I have also said would likely need to take part in the next leg of leadership if the SPX were to retest the prior highs are U.S. banks as they would signal the all clear in a way that the mildly bruised economy of late was set to reflate. To my eye, the XLF, the S&P Financials select etf which is predominantly bank stocks remains technically challenged in a well-defined downtrend, having never made a new high from its Q1 2018 high for the balance of the year, despite the fact that the SPX did in the fall: 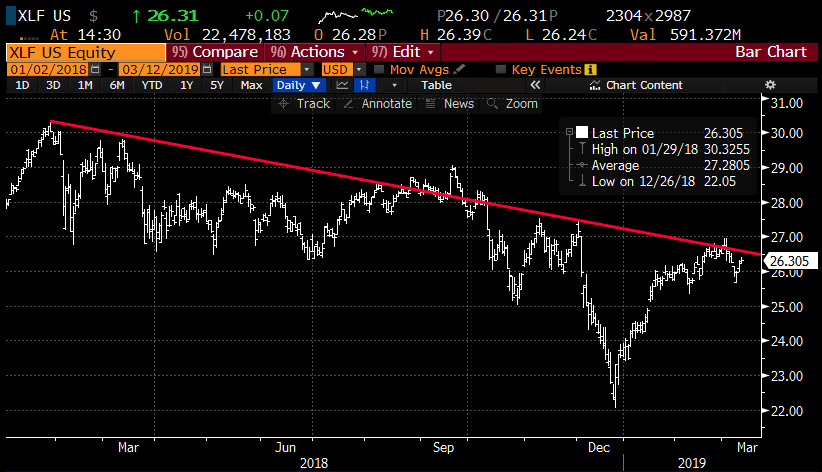 While the Fed’s dovish pivot in the last couple months has been a boon for stocks, it has kept the spread between the 2 and 10-year treasury at a wickedly flat spread nearing 15 basis points of most of the year, at levels not seen since the start of the financial crisis in 2007, the last time this curve inverted: 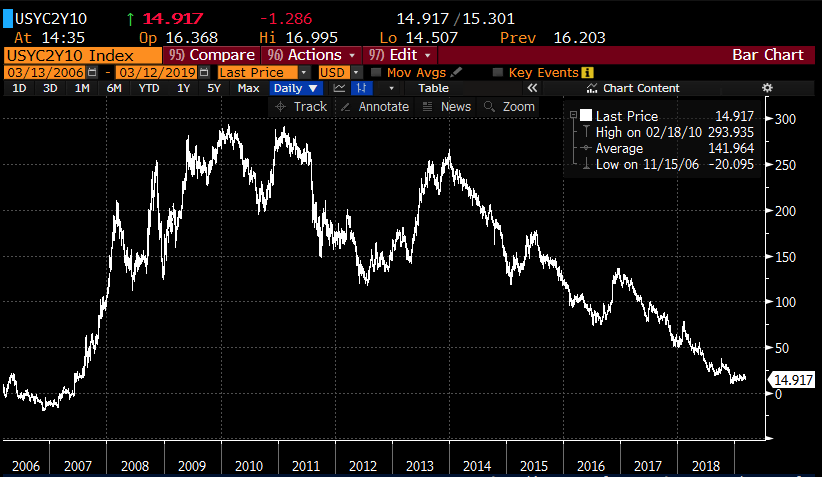 The relentless dovishness of the Fed in 2019, a dramatic shift from their easing bias in 2018 has caused the potential for an inversion of this spread, which puts tremendous pressure on net interest margins for banks like JPM, BAC, and C who make money by borrowing short-term and lending long term. I would also add that many economists and strategists predict recessions within 12 to 18 months of such inversions and economically sensitive groups like banks are often the hardest hit during market downturns that coincide with recessions.

There was some put activity in one bank that caught my eye today, in Bank of America (BAC), looking out to April 26th weekly expiration, which will catch most large-cap bank stock’s Q1 earnings releases. When BAC was $29, there was an opening buyer of 15,000 of the April 26th weekly 28 puts paying 47 cents to open. These puts if directional, or a hedge breakeven at 27.53, down about 5% from the trading level. The one year chart of BAC is pretty interesting when you spy that mid-January gap of 7% following better than expected Q4 earnings. The stock has done a nice job holding the earnings gains (testing $28 in February, and then again last week) but has made little progress since. 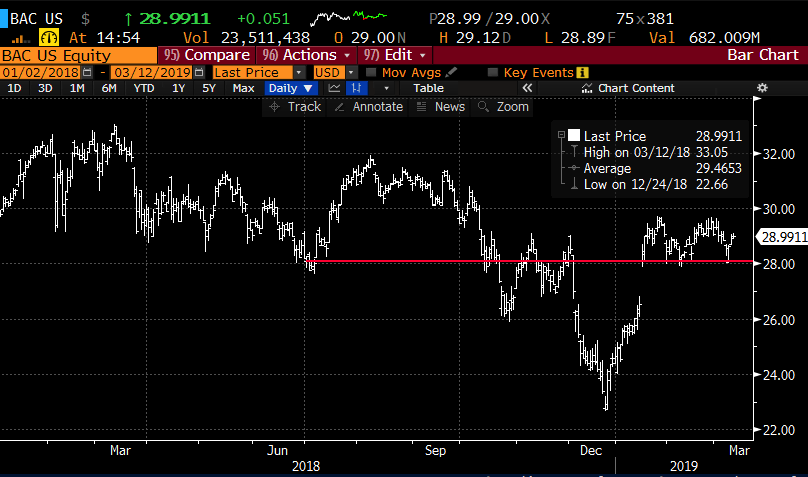 If I were inclined to play for a gap fill following BAC’s Q1 earnings on April 16th, or looking for dollar cheap protection, I might consider the following put spread in April expiration:

Rationale:  this trade idea risks a little more than 1% of the stock price playing for a 10% drop between now and April expiration, which will include an earnings event. The options market is suggesting there is a little less than a 30% chance this trade will be break-even on April expiration.