Earlier this week Facebook founder and CEO Mark Zuckerberg announced in a blog post that the company was making a significant tweak to its business model in what he called A Privacy-Focused Vision for Social Networking:

Today we already see that private messaging, ephemeral stories, and small groups are by far the fastest growing areas of online communication. There are a number of reasons for this. Many people prefer the intimacy of communicating one-on-one or with just a few friends. People are more cautious of having a permanent record of what they’ve shared. And we all expect to be able to do things like payments privately and securely.

I believe the future of communication will increasingly shift to private, encrypted services where people can be confident what they say to each other stays secure and their messages and content won’t stick around forever. This is the future I hope we will help bring about.

Investors and tech commentators were left a tad puzzled by the unexpected announcement as FB’s dominance in mobile social advertising is showing no signs of letting up, with last year’s nearly $56 billion in sales expected to near $70 billion in 2019, despite that growth seeing material deceleration from 37% in 2018 to an expected 23% in 2019.

Famed Venture Capitalist, Fred Wilson of Union Square Ventures in NYC had some pretty pointed comments about FB’s proposed Business Model Pivot on his blog the other day (emphasis mine):

I saw Zuck’s post on pivoting to private interactions from public posts yesterday and I had a flashback to Bill Gates’s Internet Tidal Wave memo to his company almost twenty-five years ago.

I have always seen a lot of Gates in Zuck. They both have this incredible ability to see someone else’s product and realize that they need to build their own version of it.

It will be interesting to watch Zuck do what Gates was ultimately unable to do – completely reboot the company’s business model to position itself to win the next wave in tech.

When Zuckerberg uses terms like “private messaging, ephemeral stories, and small groups” one’s attention turns to Snap Inc (SNAP), who has already once felt the sting of Zuckerberg’s mimic on the product front (remember Stories in 2017?). While Facebook Stories initially did a number on SNAP’s user growth early last year, the company has weathered competitive headwinds and self-inflicted wounds on design and to start this year posted Q4 results that beat analyst expectations on daily active users, increased ad loads, lower than expected EBITDA loss and better than expected gross margins. The stock gained 22% the day following results and continued a run to late last month that saw the stock double from its all-time lows made in December. The stock found some resistance two weeks ago at the breakdown level from September which resulted in the stock losing half its value from there, but I will say that given FB’s intentions I am fairly surprised SNAP acts as well as it does, down only 10% from its recent highs: 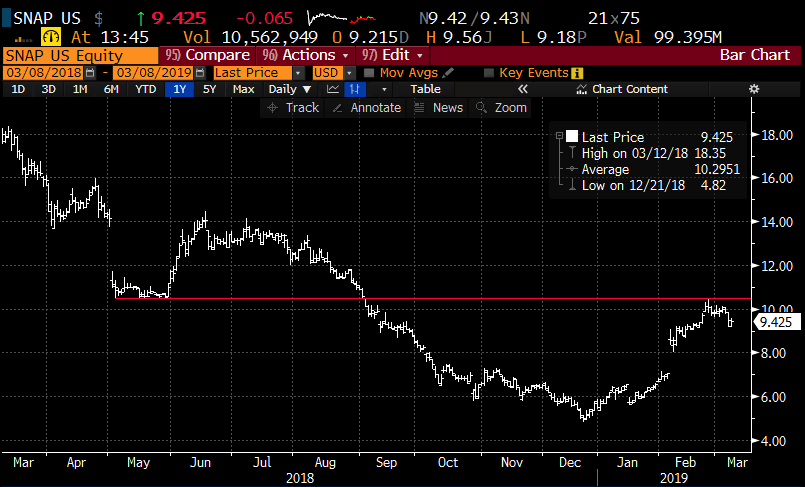 SNAP’s share price resilience on the FB news tells me a couple of important things, for now. First, imitation is obviously the sincerest form of flattery. FB knows that SNAP has a very unique product offering, while they might be able to duplicate it for their existing users, they might be able lure SNAP’s dedicated user base. So there is a sense of scarcity as it relates to SNAP’s offering and platform. Second, with the expectation of a slew of tech IPOs in the coming months, SNAP’s 30% revenue growth and $11 billion enterprise value (despite continued losses) might cause some investors to see SNAP as cheap on a relative basis. And third, while SNAP founder and CEO Evan Spiegel have super-voting rights and he can do what he wants with the company, there may come a time in the near future where SNAP would be a very valuable property for a larger online platform. There are no shortages of combinations that I can come up with, the first being a merger with Twitter (TWTR), or acquired by Google, Amazon, PayPal, Disney, Verizon, AT&T… you get the point.

I think it is important to consider how FB might monetize direct messaging without serving ads as they do in their public offerings, which would be offering services like payments, music, gaming in a nod to China’s WeChat business model.T

There will be no shortage of platform and online service companies that should be worried about Facebook’s ambitions, but that worry might lead them to court Evan Spiegel to help him realize how valuable his platform might be as a part of a much larger platform.

When SNAP reports their Q2 results in late April / early May investors will be looking for any continued improvement in the metrics that sent the stock soaring in early February. But the stock has run a lot, and for those looking to position for higher highs later in the year might consider call calendars, for instance…

The ideal scenario is that SNAP stock is near 11 on April expiration and the short 11 call expires worthless or can be covered for a small amount and you are left long July 11 call for 44 cents or about 5% of the stock price.

The max risk of the trade is 54 cents on a sharp move lower than current levels or a sharp move above the $11 strike price.