Shares of Chinese online travel company Ctrip (CTRP) are trading up 22% today after an unexpected Q4 beat caused a rush of analysts to upgrade the stock, per Bloomberg:

Citigroup’s Alicia Yap raised her rating on the stock to buy from neutral, saying “visibility of Ctrip’s outlook has improved implicitly” as its first-quarter revenue forecast was better than expected despite continued macroeconomic uncertainty. Margin improvement and “a more benign competitive landscape” helped persuade JPMorgan to lift its rating on Ctrip to overweight from neutral. Analysts led by Alex Yao see the start of “an earnings upgrade cycle” following a 41 percent drop in the share price from July 2017 through Monday’s close. International business is expected to be a long-term growth driver. Morgan Stanley raised its rating to overweight from equal- weight, saying “investors have recently increased risk appetite to add positions in China and started chasing the laggards.” Analysts at CLSA also upgraded the stock to buy as tighter spending should improve margins even as Ctrip maintained a “cautious” 20 percent revenue growth target for 2019 in light of macro uncertainties.

CTRP is now up 70% from its 52-week lows made in November but quickly approaching the downtrend that has been in place from its all-time highs made in mid-2017, a spot where the short-squeeze might find some technical resistance: 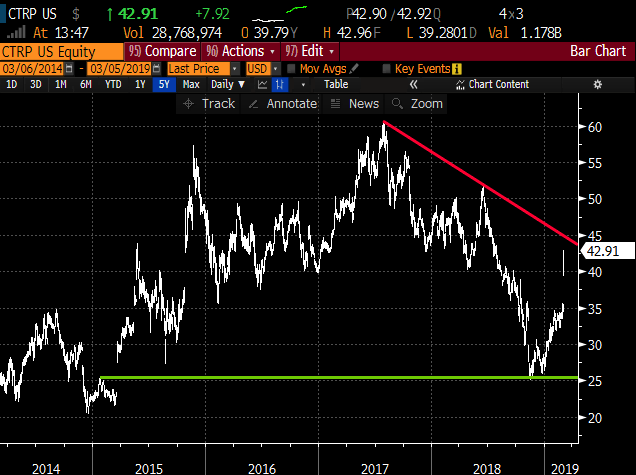 Today’s move in CTRP got me looking at another hard hit Chinese internet stock, Baidu (BIDU), the dominant search engine in China. Unlike most other stocks in the group, before today’s 4.7% bounce, the stock looked to be flirting with a test of its 52-week lows made in January, and even with today’s pop, the stock is only 10% above those levels. But today’s pop squarely puts it on my radar as a chart trying to bottom, holding the prior low and basing above the recently broken downtrend and little overhead resistance until about $205, its breakdown level in October: 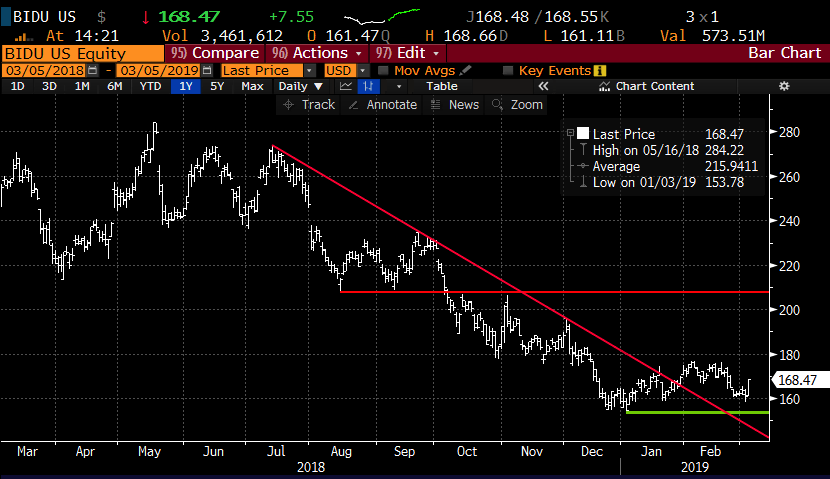 The next identifiable catalyst for the stock will be their Q1 earnings expected the last week of April. Aside from that, any sort of trade deal with China might be considered a positive catalyst, but with the Chinese government overnight guiding down 2019 growth estimates to be between 6 & 6.5%, from last year’s 6.6%, investors remain very skeptical of the Chinese economy turning on a dime, which is one reason why defining one’s risk makes sense for those looking to make directional bets.

So what’s the trade? If I were inclined to play for a bounce over the next two months back towards technical resistance just above $200, I might consider the following call spread…

Break-even on May Expiration:

Rationale: this trade idea risks 3.3% of the stock price, with a break-even up 7% offering max profit potential of nearly 12% if the stock is up 19% in a little more than two months. This trade idea is a little aggressive in terms of expectations for movement, and the break-even is a little higher than we would usually like, but given the stock’s under-performance to many of its peers in 2019, the slightest bit of good news could cause the stock to play serious catch-up.