Salesforce.com (CRM) is scheduled to report their fiscal Q4 results tonight after the close. The options market is implying about a 6% move in either direction or about $11, which is very rich to the 4.2% average over the last four quarters, but basically in line with its ten-year average one-day post-earnings move of about 6.5%. With the stock about $157, the March 8th weekly 157.50 straddle (the call premium + the put premium) is offered at about $11, if you bought that, and thus the implied movement between now and Friday’s close, then you would need either a rally above $168.50 or a decline below $146.50 to make money.

CRM’s nearly 15% ytd gains have modestly outpaced those of the Nasdaq Composite’s 14.5% ytd gains. But the stock’s 40% gains from its Q4 lows, and it’s the ability to make a new all-time high on Friday highlights the return of investor enthusiasm for high growth high-valuations. The stock’s 4% decline is notable today, hours before its earnings report as it has been up in sympathy with strong results from smaller competitors, over the last month… some might be asking whether the stock is priced for perfection into the print? The stock’s breakout above its prior all-time high last week and its subsequent failure today might cause some technicians to declare a double-top if the stock is unable to retake $160 if the company issues strong results and guidance: 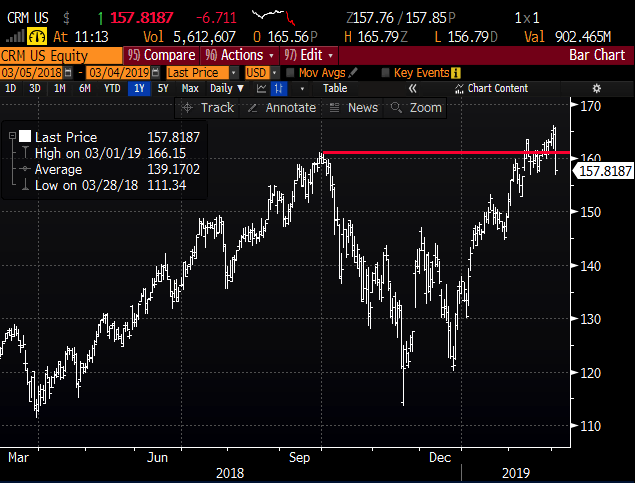 Despite valuation concerns, sell-side analyst sentiment remains off the charts with 41 Buy ratings, only 3 Holds and No Sells, with an average 12-month price target of just below $176. Short interest is at a mere 1.4% of the stock’s float.

As for valuation, CRM trades about 57x expected eps growth (adjusted) of 6% in fiscal 2020 (current year), which is set to decelerate from 90% this year, while sales growth in fy2020 is expected to see deceleration to 21%, placing the stock at about 7.6x sales. For comparison sake, ADBE which sports a slightly higher market at cap $125 billion (vs $120 billion for CRM) trades richer an astounding 9.6x expected sales this year of $11.1 billion growing at an expected rate of 24% in the current year.

So what’s the trade? Clearly, the stock is priced for a beat and raise, and until this morning there has been little fear in high growth high valuation groups like those who sell licenses to SaaS products in the cloud that are seeing a multi-year secular shift from both businesses and governments the world over.

But If you are long CRM at what might be a near-term technical and fundamental inflection point, you might consider collaring your stock in a market that feels, at least today that might get a bit more volatile.

Profits of the stock up to $170, stock called away at $170 (plus the 30 cent credit) but one could always cover the short call for a loss to keep the long position intact if the stock is above $170 on April expiration.

Rationale: one would collar a core position into a potentially volatile event to lock in gains while defining risk to the downside. One would only collar stock if they were more concerned with extreme downside as opposed to the extreme upside because that is what you are giving up to have zero cost defined risk to the downside.