This morning shares of Elf Beauty (ELF) are down 20% this morning after issuing very disappointing earnings last night and some corporate actions, per MarketWatch.com:

the company reported worse-than-expected fourth-quarter sales and said it would close all 22 of its stores. Net income totaled $9.6 million, or 20 cents per share, down from $21.5 million, or 44 cents per share, for the same period last year. Adjusted EPS was 30 cents, beating the 21-cent FactSet consensus. Sales totaled $78.6 million, down from $81.6 million last year and below the $84.5 million FactSet consensus. E.L.F. Beauty stores accounted for 5% of net sales in 2018. The company plans to focus on national retailers and digital platforms after its store closures. The company expects to take a one-time charge of $23 million to $25 million, recorded at the period ending March 31, 2019. E.L.F. also announced that its Chief Financial Officer John Bailey would be stepping down, also effective on March 31, 2019. E.L.F. is shifting its fiscal year from Jan. 1 through Dec. 31 to April 1 through March 31 to align with national retailer cosmetic shelves, which are reset in February or March. 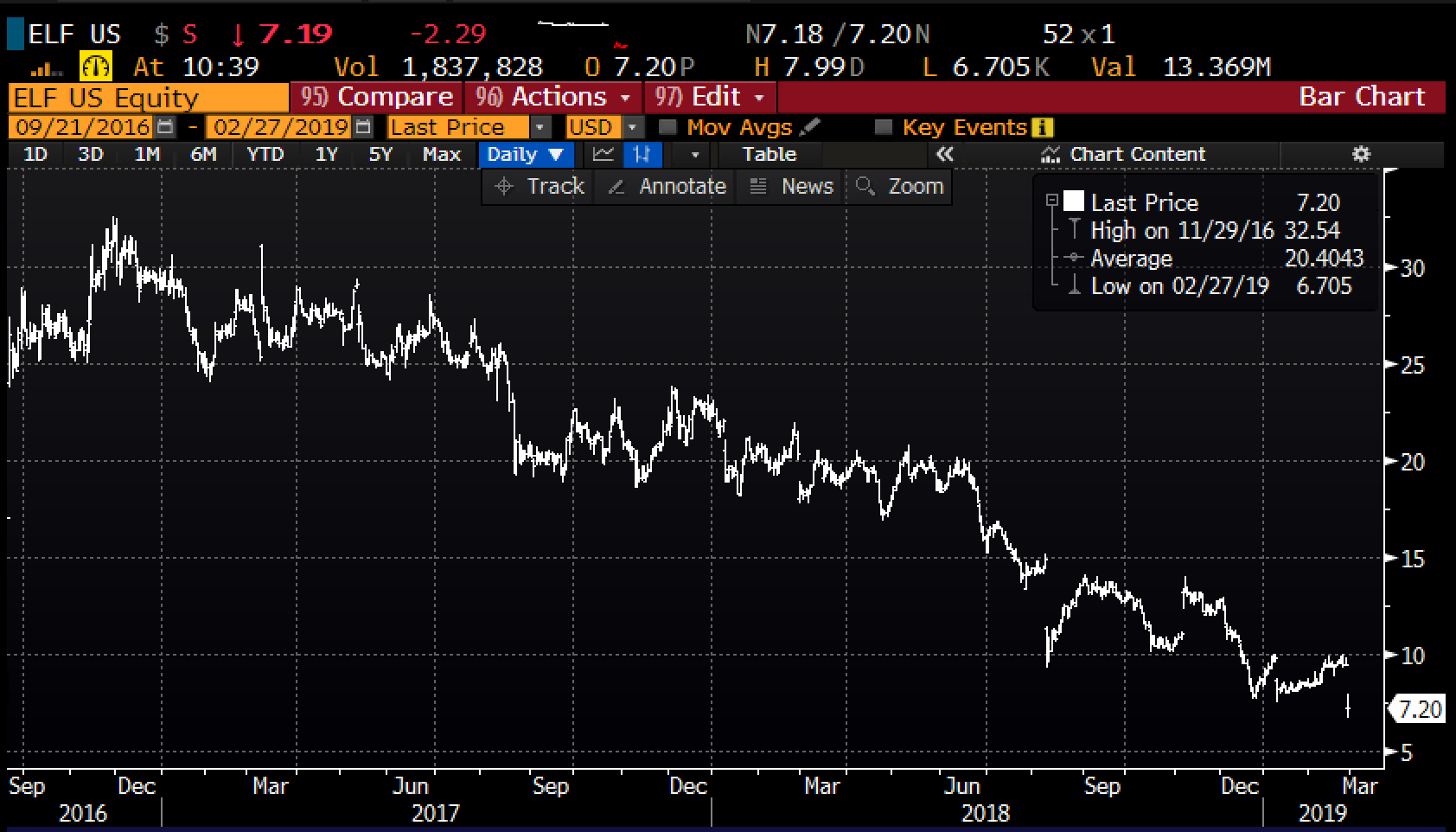 Despite COTY’s recent violent pop, the stock is still down 66% from its post-IPO highs in 2015: 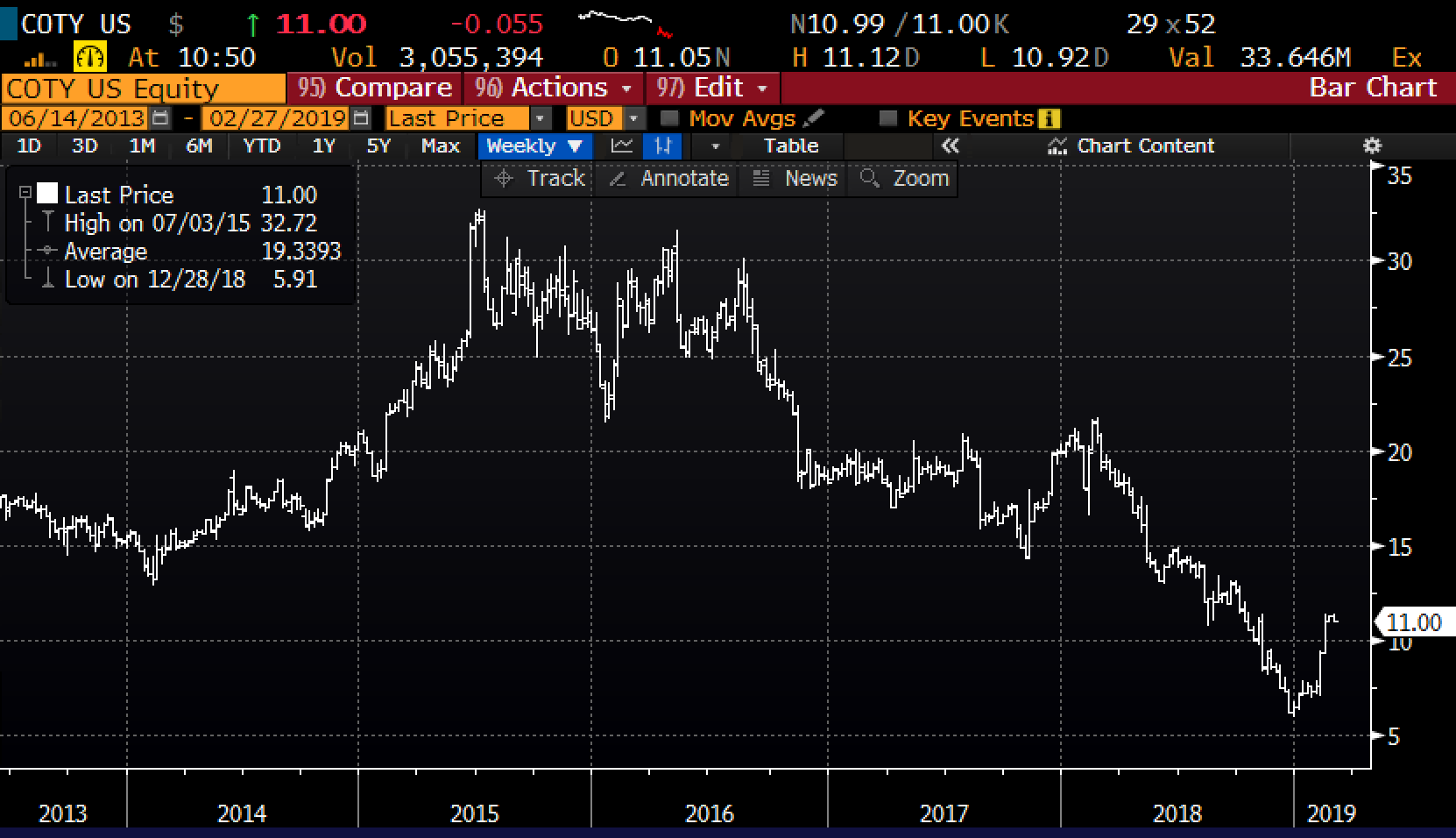 EL and ULTA are different stories as they both flirt with prior all-time highs, with EL actually have just made a new one: 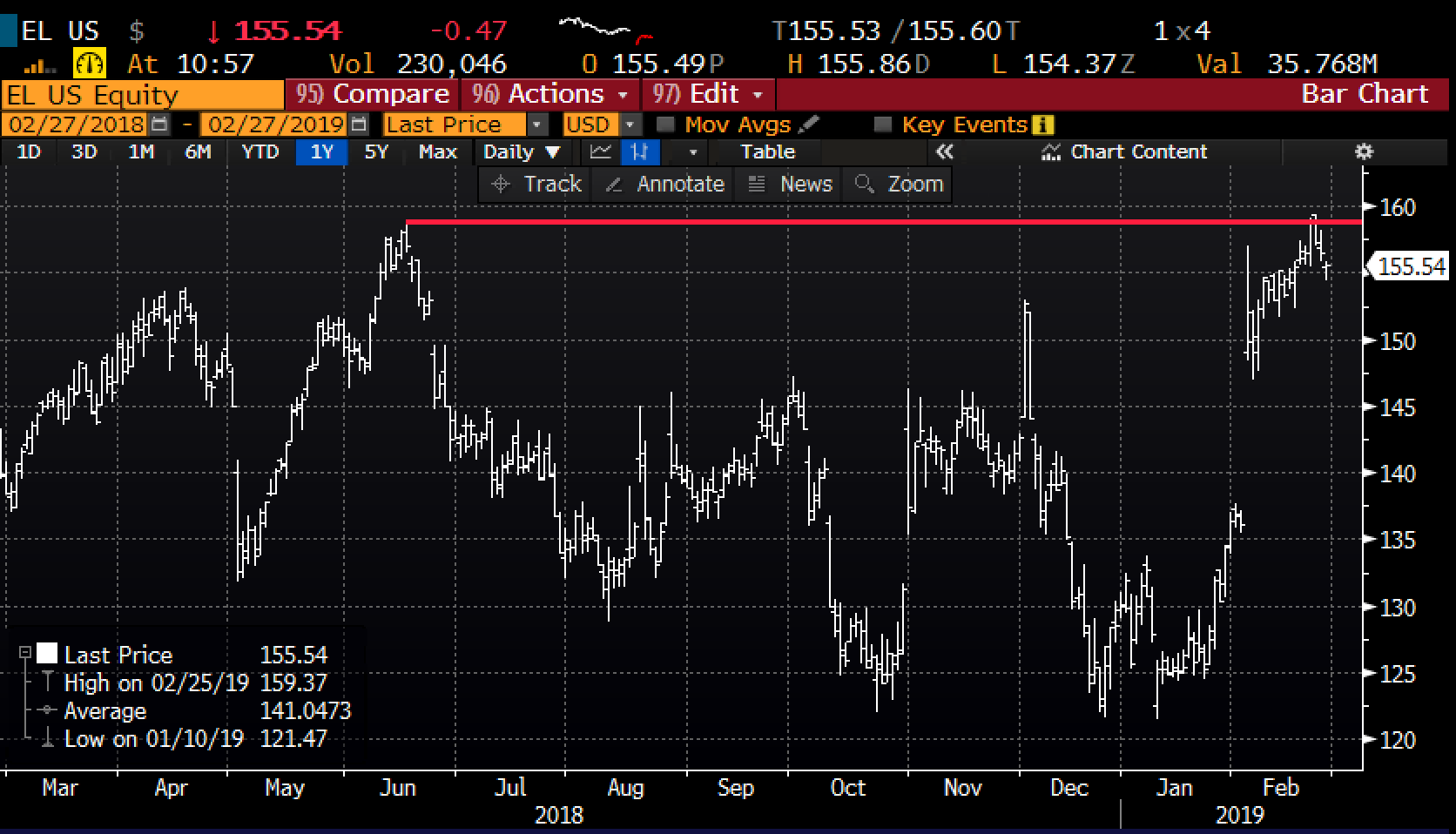 But let’s take a closer look at ULTA, who is scheduled to report their fiscal Q4 after the close on March 14th. The stock failed to breakout above its prior closing highs made in November, possibly marking a double top, with the next real support down in the mid $280s, and then a sort of air pocket back toward the August 2018 breakout level near $260: 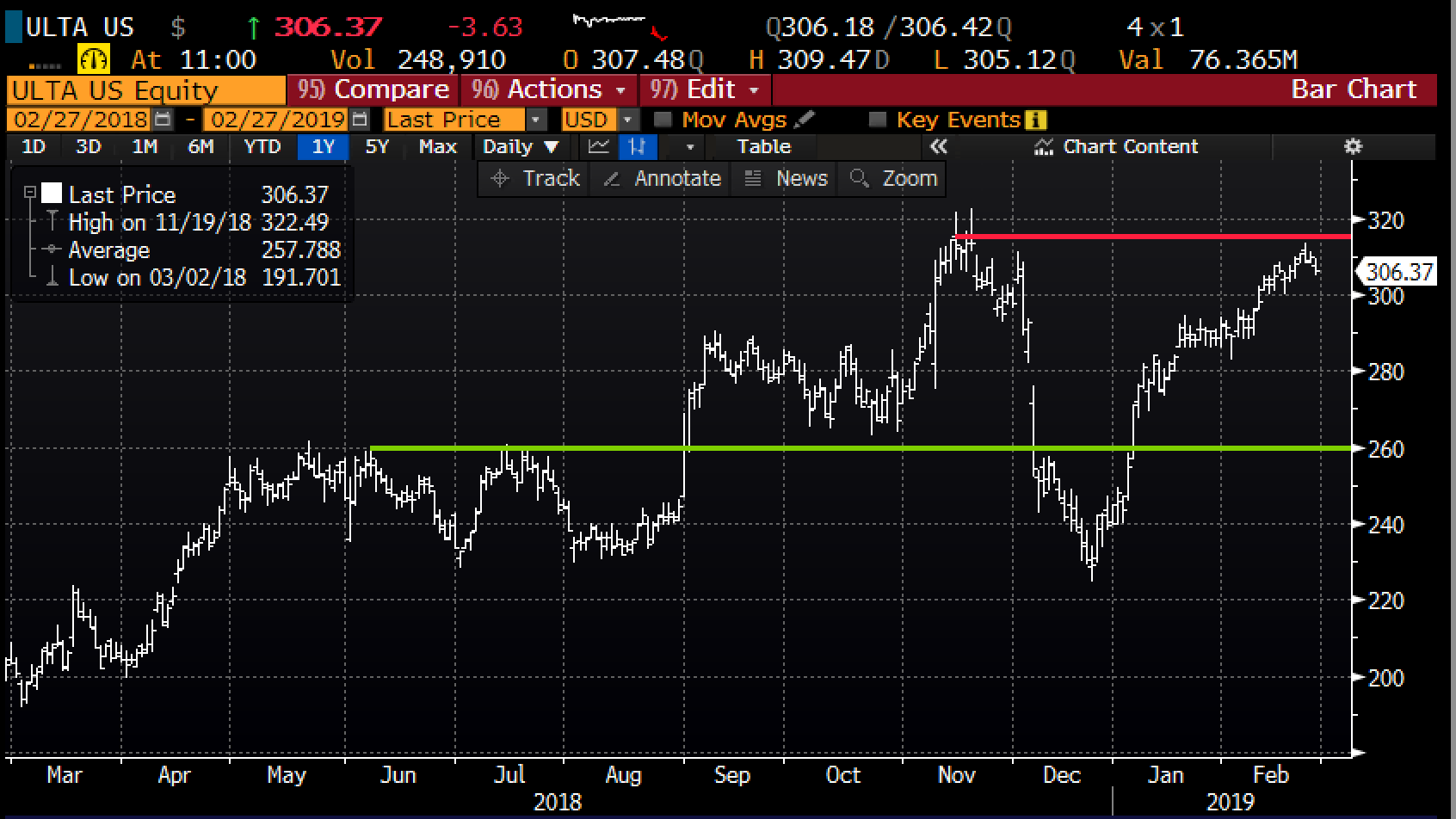 On a fundamental note, it’s worth going back to the stock’s massive 13% gap on December 7th after issuing disappointing FQ4, per Bloomberg:

That was one heck of a reaction to what I would say was only a mild guide-down relative to expectations, it is fairly unusual to see low single-digit guidance miss matched with a double-digit stock decline.  That said investors might start to be pricing in eps and sales deceleration for 2019, in a stock that trades well above a market multiple and well above the multiples of its peers. ULTA trades about 24x 2019 expected eps growth of 17% on 12% sales growth.

It is is a little too early to start considering earnings trade ideas but with the stock’s pause at technical resistance, I thought I’d look to see what the options market is pricing. With the stock at $306.50, the at the money straddle(the call premium +the put premium) is offered at about $22 or about a 7% move between now and March 15th, the day after earnings. These options should likely stay bid in vol terms given the stock’s huge move from its Christmas lows and its post-earnings plunge fresh on investors mind from early December.

But options prices appear very expensive relative to how much the stock has been moving.  The one year chart below of 30 day at the money implied volatility (blue line, the price of options) vs 30 day realized vol (white line, how much the stock is moving) is quite striking as realized has fallen out of bed, while implieds have picked up meaningfully of late ahead of earnings. Short-dated options are NOT cheap and if the stock does not move much after earnings there will be an epic vol crush.

Like I said before it is likely a little too early to define the levels for an earnings trade, but ELF’s plunge got me looking at the groiup.