On Tuesday (below) I offered some thoughts on the retail sector following Walmart’s (WMT) results and stock response and in front of the next two weeks earnings reports from some of the XRT’s (S&P Retail etf) largest components. Here is an additional trade Idea for those looking for more time for this idea to play out, looking to a wider spread in April:

Rationale: This trade risks a little more than 2% of the etf price for near the money participation for nearly 2 months with a bunch of potential catalysts starting with the next two weeks earnings reports from some of the etf’s largest components.

In the U.S., the company’s comparable sales, which exclude gas but include e-commerce sales, rose 4.2% in the January-ended quarter, one of the behemoth’s biggest quarterly gains in a decade. Walmart got a boost from strong grocery sales, online orders and holiday purchases including toys. Walmart had expected quarterly U.S. comparable sales to rise at least 3% from a year earlier.

Overall, Walmart reported a quarterly profit of $3.69 billion, or $1.27 a share, for the fourth quarter ended Jan. 31, compared with $2.18 billion a year earlier. Excluding a tax-related charge and other items, Walmart said it had an adjusted profit of $1.41 a share. On that basis, Wall Street was expecting earnings of $1.33 a share.

At the stock’s highs yesterday, it was within 2% of its all-time highs made in November. From purely a technical standpoint, the stock’s nearly 6% reversal from yesterday’s highs, and more than a gap fill today are nothing short of disastrous, given that the initial reaction was too perceived “good news”. 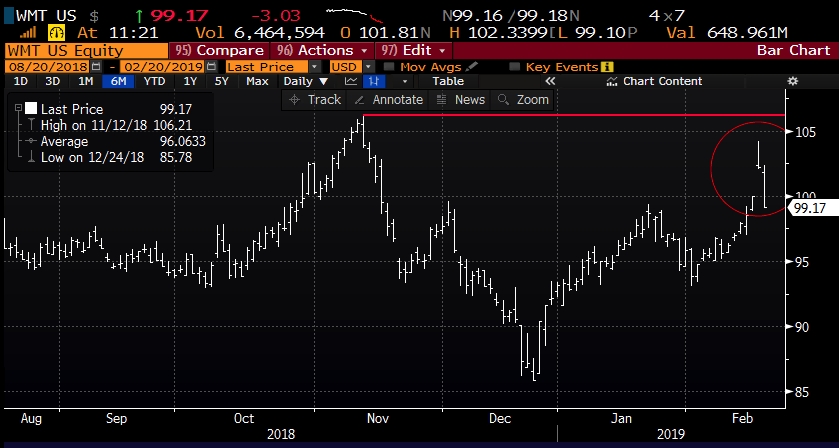 So why the stock turn? One main reason is that investors have been waiting for the company’s investments in their online channel to pay-off to help fend off Amazon, but the “result of a higher percentage of its sales coming from lower-margin e-commerce orders” their profit margins decline in the quarter. also adversely affected by inflationary pressures relating to transportation and tariffs. This is what happens when you compete with a company who sacrifices margin in their core retail to gain market share while being afforded the opportunity to sustain these low margins because a business that is 10% of their overall sales (AWS) has margins close to 30%.

The next two weeks will bring some fairly important earnings reports from large U.S. retailers: The Home Depot (HD) & Macy’s (M, already preannounced) on Feb 26th, Lowe’s (LOW) & TJX Companies (TJX) Feb 27th, Target (TGT) & Kohls (KSS) on March 5th, Costco (COST) & Kroger (KR) on March 7th. Walmart’s 2 day reaction to their results might be a bit telling for what we are to expect from other retailers… that Q4 was as good as it gets for some time and we could have just heard the death rattle for U.S. retailers until we start to get towards the buildup into the holiday selling season in the fall.

The XRT, the S&P Retail etf has actually mildly outperformed the S&P 500 (SPX) off of the Christmas lows, up 20% vs 18%, but much of these gains came in the two weeks following the lows but has since consolidated a fairly tight range until this week’s little breakout: 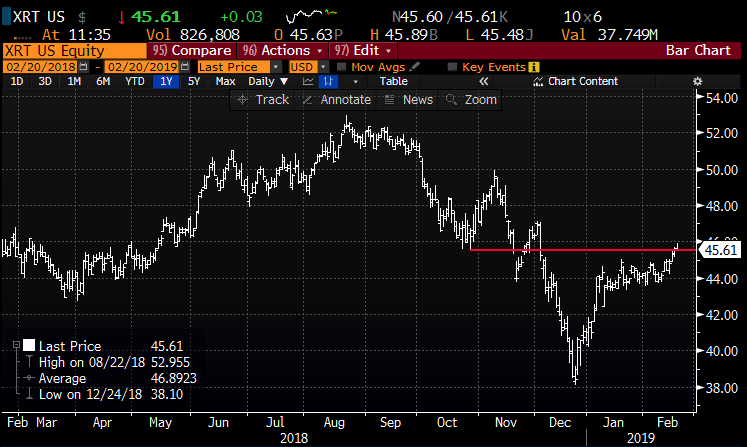 I am not particularly optimistic that more than half of the companies set to report will be able to offer upbeat guidance that would propel the XRT ack to its Nov highs near $50, and the etf’s rejection at $46 which served as brief support in the fall could make an attractive entry for a defined risk short idea.

SO what’s the trade? Target a move back to $43 in the coming month based on downbeat earnings guidance and no real clarity on future tariffs with China…

Rationale: this trade idea defines risk to 1.3% of the stock price, with a breakeven down 1.8% from the current level, offering a profit potential of 4.2%, or 3x the premium at risk if the etf is down 6% in the next month, which has no shortage of catalysts. The options market is saying there is about a 30% chance that this trade is in the money on March expiration, and about a 16% chance that it is at its full value at $43,