Regular readers know that one of the primary inputs for my belief that the S&P 500’s (SPX) Jan and Sept 2018 highs might well be a massive double top was in large part to do with the outperformance on a handful of high growth, high valuation tech stocks (that I call MAGA), but most of you refer to as FAANG (Facebook, Apple, Amazon, Netflix & Google). There were even indices created to show the performance of the group. At one point in early 2018, this group made up nearly half the weight of the Nasdaq 100 (NDX), yep an index of 100 stocks. This was an accident waiting to happen for investors crowded into FAANG, despite the prior year and a half’s massive outperformance.

The chart below of the NYFANG index shows quite simply that the group topped out in mid-2018 and when the SPX and the Nasdaq made new highs in the late Summer, NYFANG not only did not confirm the new high but was in a fairly nasty downtrend making a series of lower highs and lower lows. 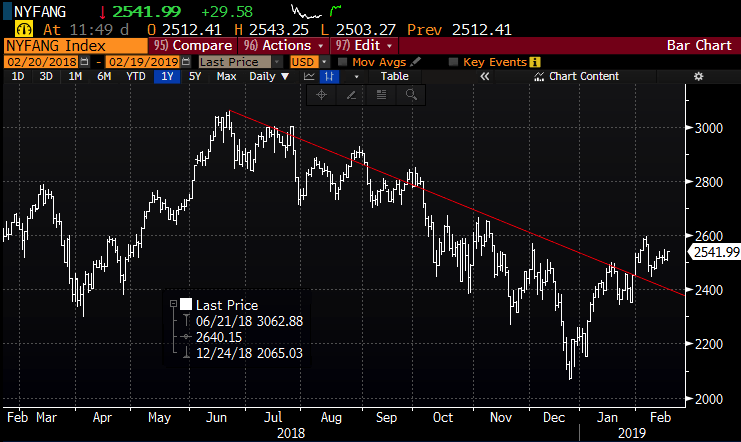 The index remains a whopping 17% below its 2018 highs, while the SPX is just 5.5% from its prior all-time high made in September: 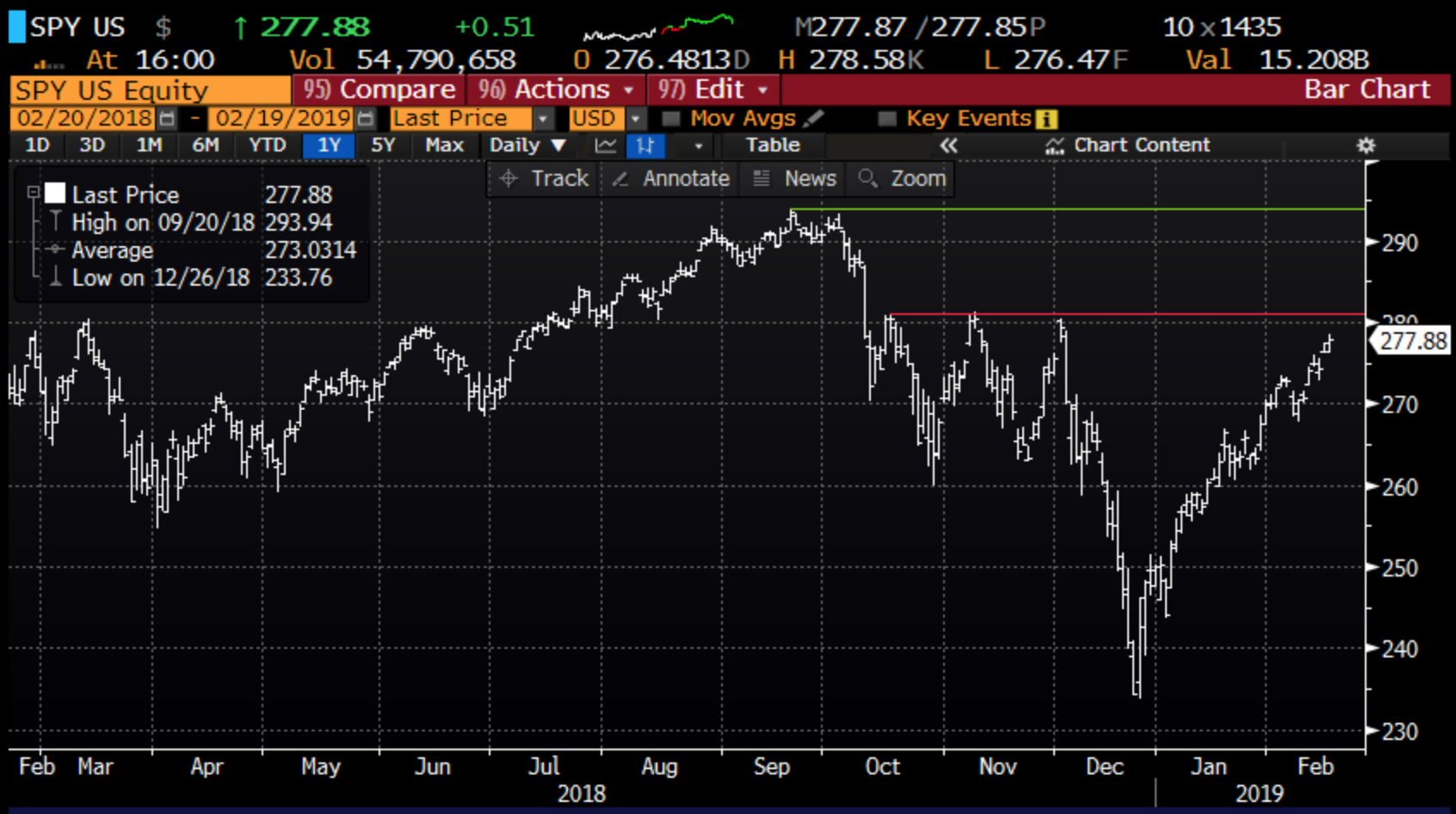 Looking at the two charts I would say the SPX appears a tad extended as it approaches near-term technical resistance, while the NYFANG just broke above the long downtrend. Its also been my view that it would be very difficult for the SPX to make a new all-time high without FAANG participating.

But when you look at the RYT, the S&P 500 Equal Weight Technolgy etf, you see that while it underperformed to the downside with a peak to trough decline of 23% to the SPX’s 20%, it has also outperformed to the upside, up 26% vs 19% for the SPX: 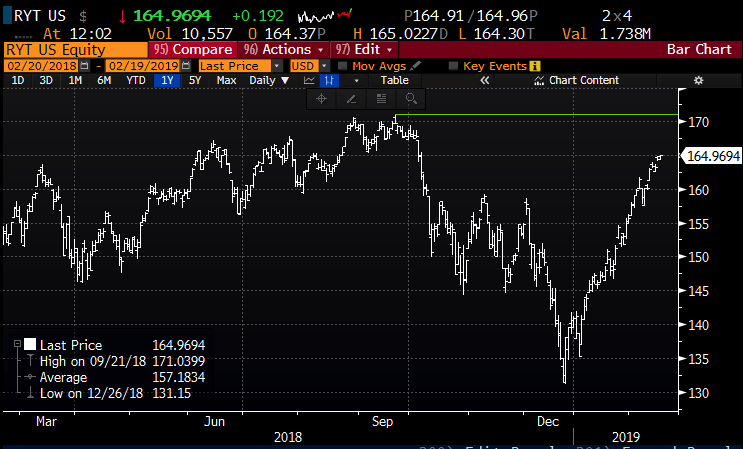 While no one said there would be no math here today, so we will avoid it, I think it is safe to assume that a move back in the RYT to its prior highs just above $170 would represent a 30% rally off of the lows, if it were to come anytime soon it would likely be the shortest time in which the SPX has every rallied 30%. For this to happen I suspect we would need to NYFANG to get going as we have seen outperformance in stocks like Workday (WDAY) that has gained 35% from its Christmas lows, but almost more important is up 65% from its 52-week lows and  is up 20% on the year trading at an all-time high… I’m not sure how much they can help from here: 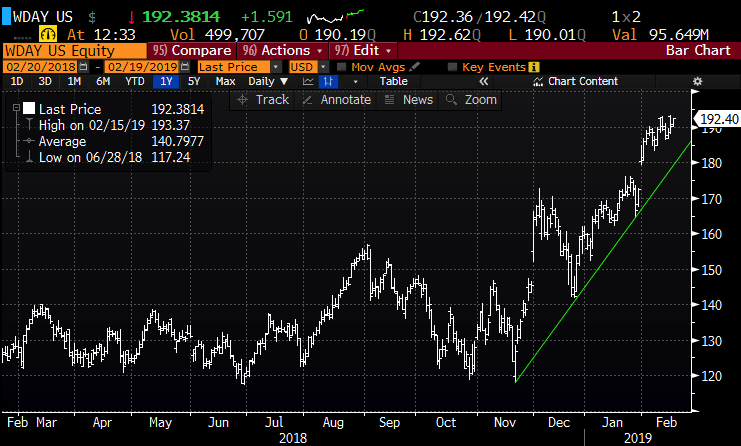 This is move nothing short of astounding, but I think it is important to note that a dozen $40 billion market cap stocks like WDAY would be equal to the market cap of Facebook (FB), which is still down 25% from its all-time highs made in July: 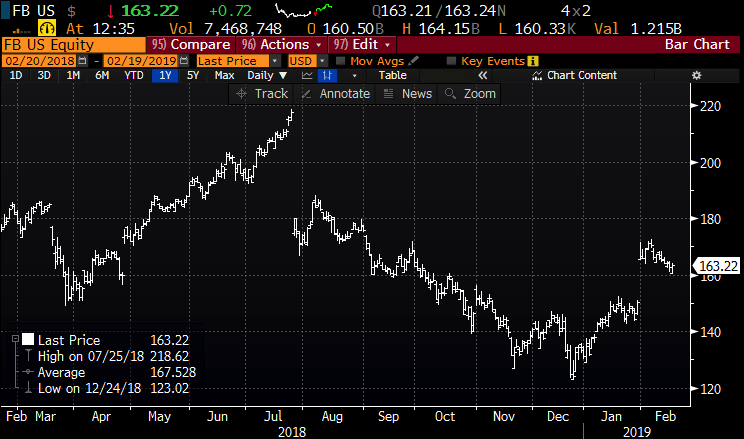 I guess my simple point is this, while the concentration in FAANG on the way up powered much of the gains in the broad market, it also masked a lot of bad performance. Now we are seeing poor relative performance from the horses that got us to the 2018 highs and I am not sure the breadth that we are seeing in smaller tech names that are making new highs is enough to reignite the bull.

The broad market is levitating, despite the ability for mega-cap tech to and groups like banks that you would like to see as a sort of sign of strength relating to economic optimism. While you often hear things like “buy protection when you can, not when you need to” from options peeps on TV, I am not sure I always agree with that, especially as we come off a sustained period of high volatility. The 30-day at the money implied volatility in the SPY, the etf that tracks the SPX is trading at 12%, well below its recent high just above 30% when the market was at its lows in December, but the if the SPY were to consolidate here, and realized volatility (white line below) were to continue to go lower, then implied volatility (blue line, the price of options) would continue to deteriorate, making owning options a difficult proposition:

Now that might not be a horrible thing if buying options for protection, and it is helping you to hold onto stocks or a portfolio in general, but it might be a tough way to make a directional bet. When we talk about buying protection, usually single stock puts or put spreads vs long stock, or etf puts vs a portfolio it is important to do so tactically, ie not too frequently as this could be a massive drag on performance. If you were early with SPY protection and options prices were to head back to the single digits as they were in Sept as the index made a new high, the decay in this puts would render them nearly useless unless in the case of a sharp move like we had in December.

The last point I would make though when considering portfolio protection is matching the hedge with something that suits your portfolio. For instance, if you are concentrated in MAGA or FAANG then the QQQ is the way to go, as MAGA makes up 35% of the weight of the QQQ and FAANG + MSFT make up 40%.

The given how far the large components of the QQQ are from their prior highs it makes sense that their concentration is causing it to lag the SPY. Like the SPY the QQQ is nearing technical resistance at the Dec high but is down 8% from its all-time highs vs the SPY down 5.5%. 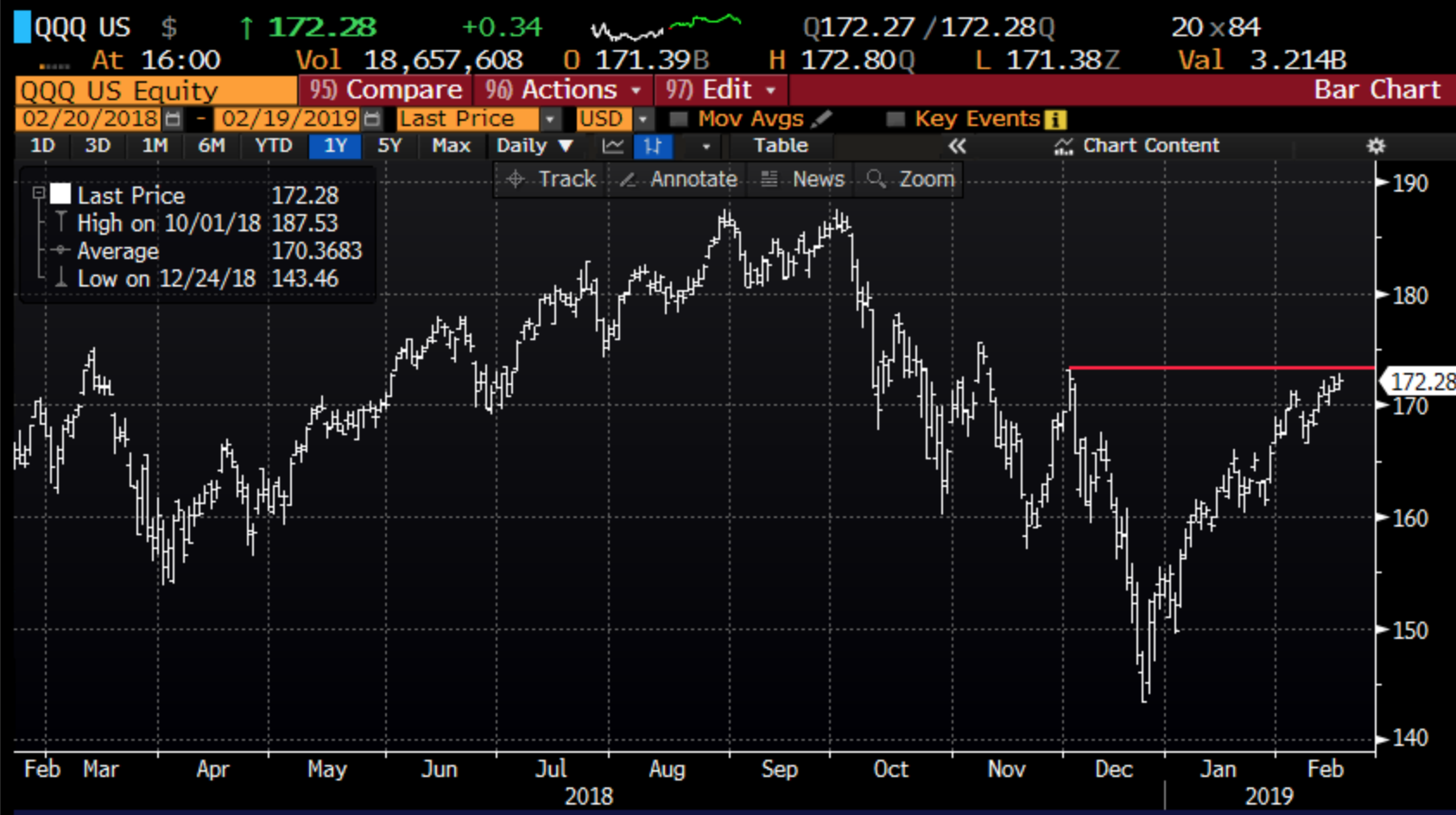 With short-dated options prices at 16% vs realized at 16%, I would suggest that these puts are a far better buy than those in the SPY given the ability for just a few stocks in the index to catalyze a large move as they are very unlikely to be go below the low teens in the next couple months.

If I were inclined to buy some QQQ protection into the start of Q1 earnings season I might consider near the money out spreads in April expiration, for instance:

Rationale: this hedge idea risks 1.3% of etf price with 4.5% of protection down 7% from current levels.

Again this is not something you would want to do too frequently, maybe after the sort of sharp move we have had and definitely when you notice the stocks that you own underperforming the gains of the market, ie they are getting tired and you want to lock in recent gains.