Nvidia (NVDA) reports tonight after the close. The options market is implying about an $11 move or about 7% between now and tomorrow’s close. This is shy of the 8% average on day move over the last four quarters. The main reason for what appears to be a muted expected move is the fact that the company issued a negative earnings and sales outlook for the quarter on January 28th, sending the stock down 14%, per Barron’s:

The company said it now expects sales of $2.2 billion plus or minus 2% for the fiscal fourth quarter, versus the Wall Street consensus expectations of $2.7 billion, according to FactSet. Nvidia’s previous guidance was also for $2.7 billion for the same quarter.

Nvidia said “deteriorating macroeconomic conditions” in China hurt demand for its gaming-graphics cards. The company added that sales for its latest-generation cards using the Turing architecture were lower than expected. The company also said it saw data center customers being more “cautious” this month.

Shares of NVDA have since recovered a bit from the post-pre-announcement lows, dilling in most of the gap, rallying about 15%, making up most of its year to date gains. The one year chart below shows that despite what appears to be an attempt to put in a bottom over the last couple months, the stock has near-term resistance at $175, the breakdown level from their Q3 gap in mid-November where the stock suffered nearly a 20% one-day drop, and remains 47% lower than its all-time highs made in early October. 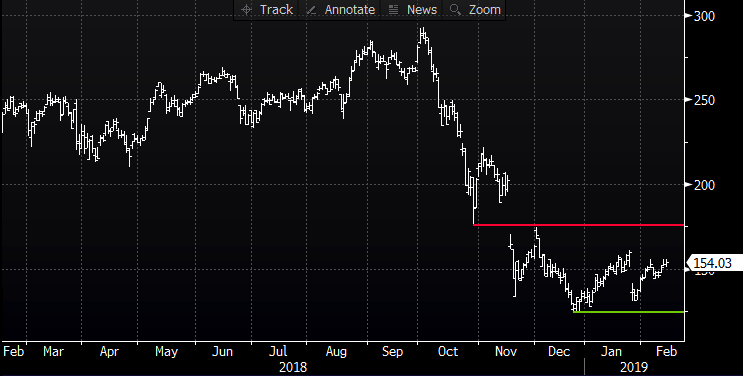 Last night on CNBC’s Fast Money program I took a quick look at the implied movement for earnings and discussed the technical and sentiment set up in the stock:

As I noted in the clip, NVDA might be setting up very similarly to three other tech stocks that have been down sharply since the fall, specifically Apple (AAPL) and Activision Blizzard (ATVI) who both pre-announced negative results, saw their stocks gap lower, but then rally sharply weeks later when they reported their full results and outlook. Could NVDA set up the same way, I guess I would be more inclined to play it that way, with defined risk, than to play for guide lower and new lows. Sometimes, as was the case with ATVI, there are just no sellers left. And to be clear in ATVI, the guidance for the full year 2019 was downright horrid, with the company guiding full-year revenues down nearly $1 billion from their prior forecast, or down 12.5%. But the stock has since rallied almost 10% since. 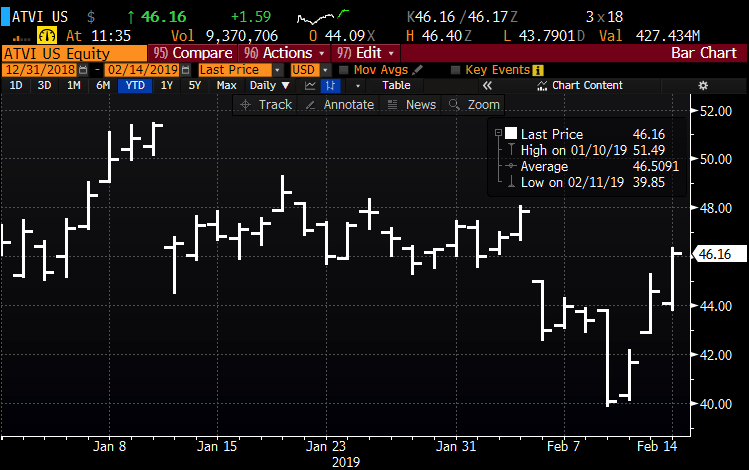 So what’s my take? While weekly options are expensive, they are likely cheap to how much the stock might be able to move if the company were able to get investors comfortable on the full year guide, with the thought that expectations are now low enough that the company might be able to have a series of beats. As I said in the clip from last night, for those looking to pick a direction, and define your risk, the break-even on at the money puts or calls is merely half the implied move, or about 3.5%. But as we often say, long premium short-dated directional trades into events like earnings are a tough way to make a consistent living, as you need to get a lot of things right to merely break-even, first and foremost direction, then the magnitude of the post-earnings move and of course timing.

If I were inclined to play for a gap higher in line with the implied move of about 11% I might consider a one-day call spread, for instance

Or for those who think the company’s guidance will disappoint meaningfully and the stock would re-test last month’s close near $130 then you might want to consider put spreads in March expiration, giving the trade some time to play out…

Rationale: The options market is suggesting that there is about a 33% chance this trade is in the money on March expiration and only about a 10% chance that the spread is at full value in a month. Risking 4% to possibly make up to 12.5%.