Activision Blizzard (ATVI) will report their Q4 earnings tonight after the close. The options market is implying about 10% move in either direction, which is rich to the 5.25% average one-day post-earnings move over the last four quarters. Last night on CNBC’s Fast Money I offered a short preview:

Shares of ATVI have absolutely been annihilated since making an all-time high in the fall, yesterday closing at a two year low, down 53% from October 1st losing close to $30 billion in market capitalization: 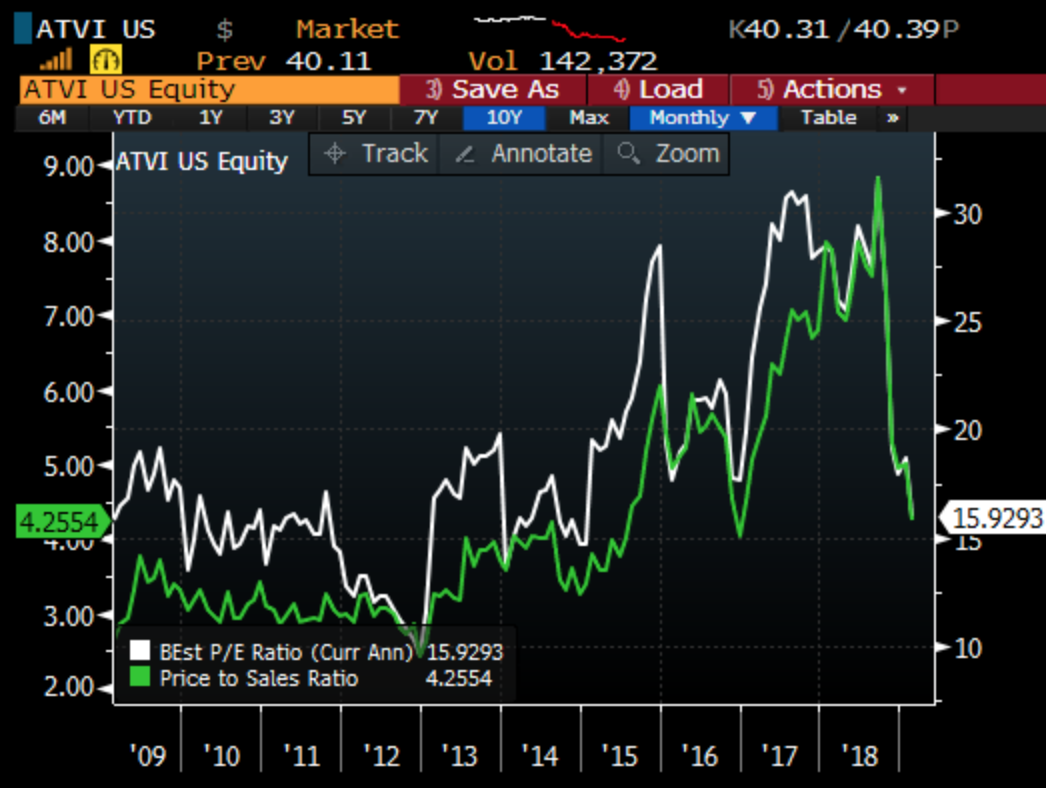 Last month, Barron’s Tae Kim summarized the host of headwinds for ATVI on Jan 18th, Electronic Arts and Activision Are Struggling to Survive a Fortnite World:

The main issue is an underperforming pipeline of games. Last November, Activision Blizzard gave disappointing earnings guidance and admitted that Destiny 2, one of its key games, had underperformed expectations, sparking a 12% stock drop the following day. Another earthquake came this month, when Activision said that it would transfer the publishing rights of the Destiny game franchise to its developer, Bungie, driving the shares down 9% the next day.

With Destiny gone, Activision Blizzard’s 2019 looks bare. Analysts have noted that its subsidiary Blizzard has no announced games, and that Activision has only its next Call of Duty game.

To make matters worse, the development studio for this year’s Call of Duty, Infinity Ward, is widely regarded as the weakest of the three that create games for the annual franchise. Infinity Ward’s last two Call of Duty titles were both significant sales disappointments.

Activision Blizzard is also facing a string of high-level management departures. Since December, it has lost its chief financial officer, two senior Blizzard executives, and a former Call of Duty studio head.

A report last week from Bloomberg suggesting the company will announce “hundreds of jobs cuts” when they report tonight has sent the stock into a tailspin, dropping 20% in a week: 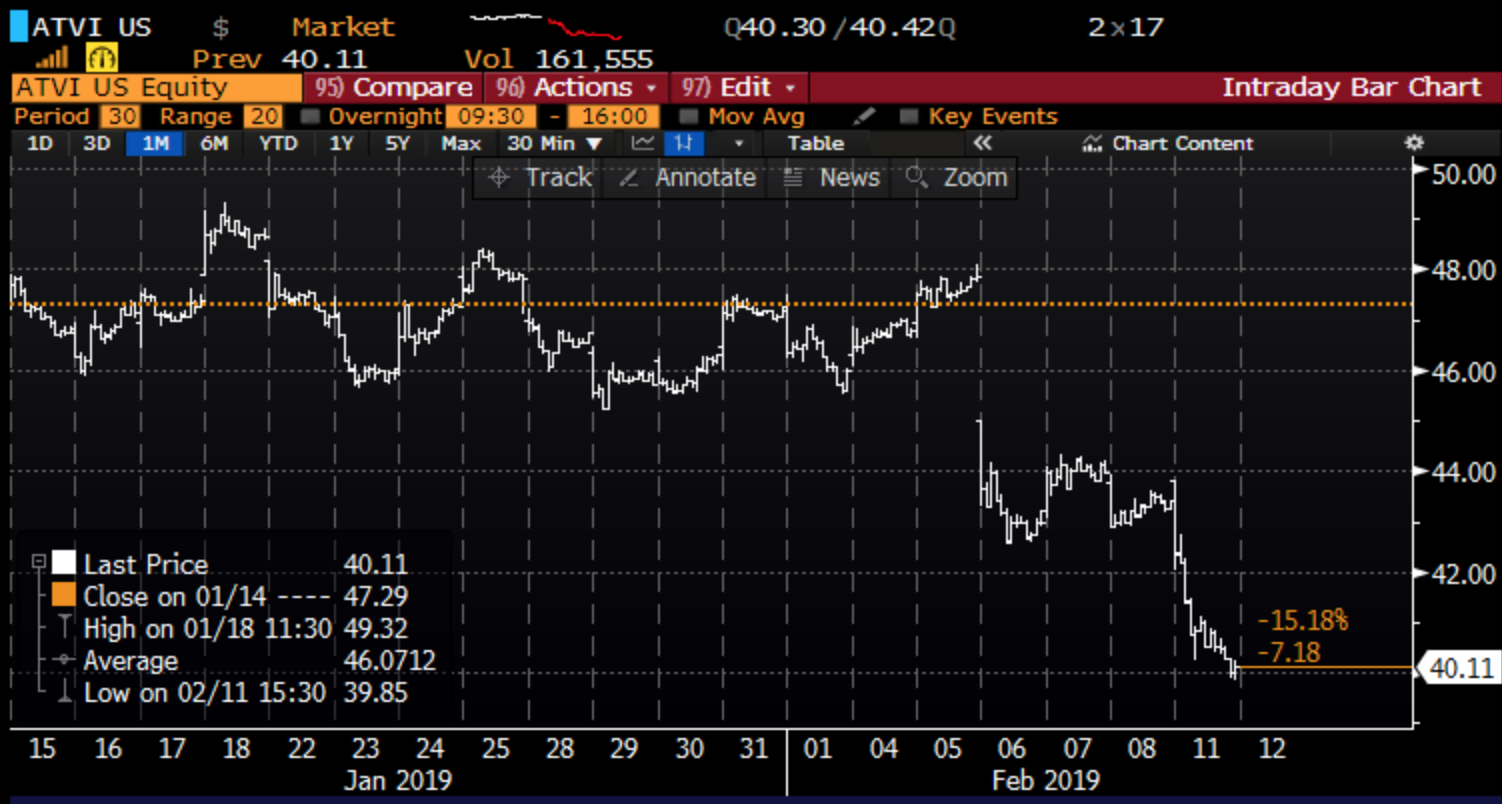 This move was also in sympathy with competitor Electronic Arts (EA) earnings miss causing a massive 13% one-day post-earnings gap, which was ultimately rescued by the release and massive gameplay by their Fortnite competitor Apex Legends that with in a week saw 25 million players, causing a massive short squeeze in the stock. 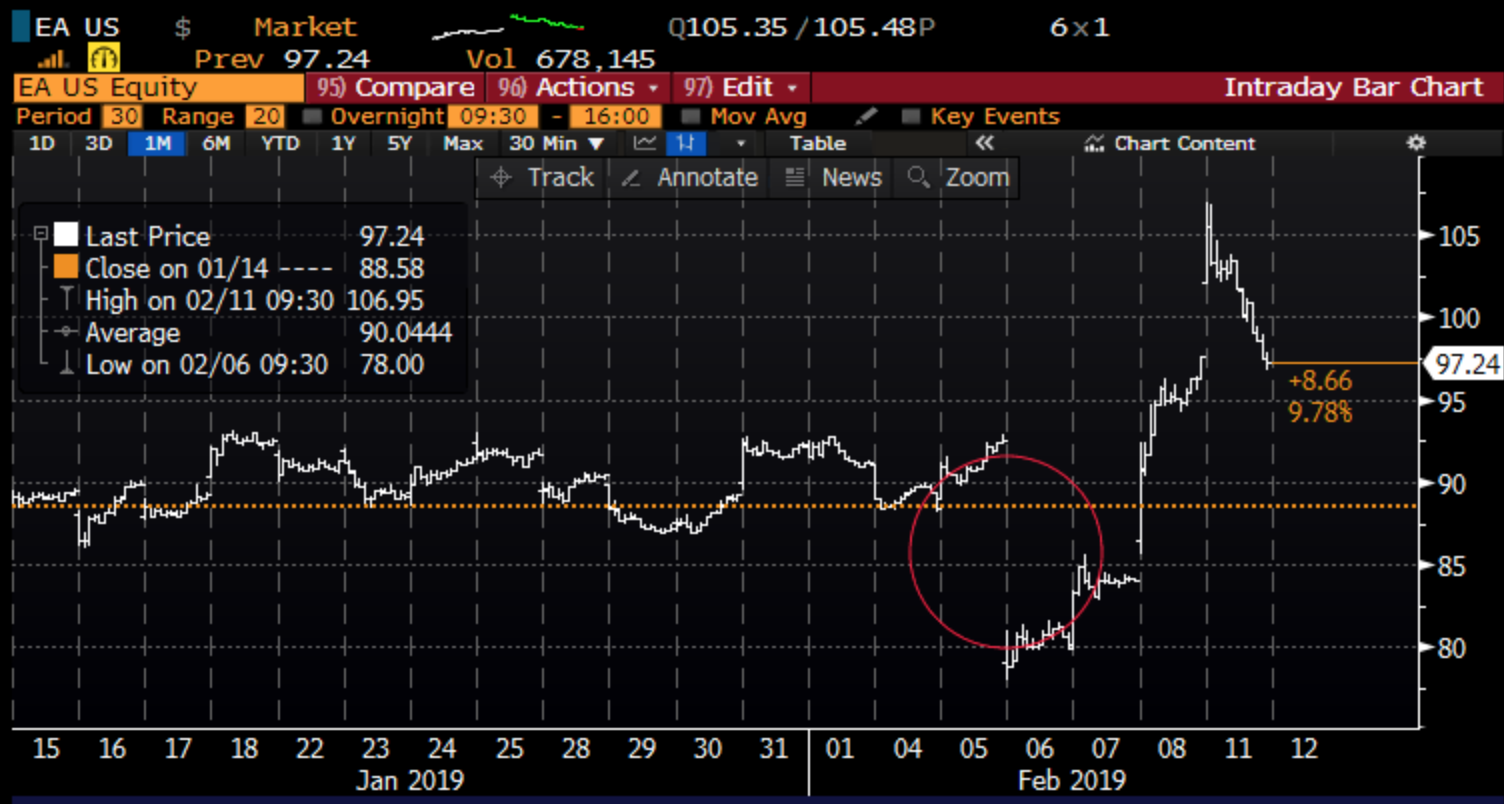 The day of EA’s results, when the stock was trading very near the 52-week lows I made the case on CNBC’s Fast Money that these content assets were just too cheap:

Despite the growing list of headwinds for ATVI, analysts remain fairly bullish on the stock with 23 Buy ratings, 10 Holds and only 1 Sell with short interest at a mere 2% of the float.

EA’s initial reaction to expected bad news last week, but its quick reversal on the slightest bit of good news should be comforting for ATVI holders who are ready to cry uncle. ATVI down in sympathy with EA, but also as a result of many company-specific issues might also set the stage for a massive short squeeze if the news tonight is not as bad as feared.

I will check back this afternoon with ways to play for this, but with defined risk.