On Friday’s Fast Money program on CNBC my co-panelist, Chartist-extraordinaire Carter Worth of Cornerstone Macro Research touched on he most extreme bounces from the Christmas lows in some of the largest sector etfs: 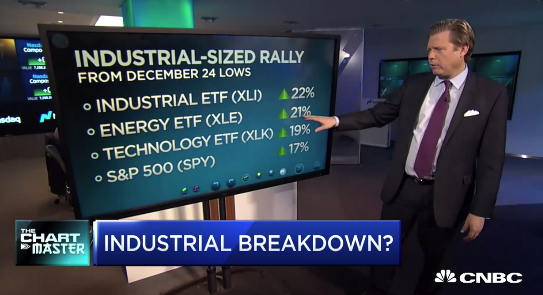 Carter highlighted the fact that despite the absolute performance of the XLI being the best of any sector in the last month, its has actually shown poor relative performance to the S&P 500 (SPX), each time failing very near the downtrend: 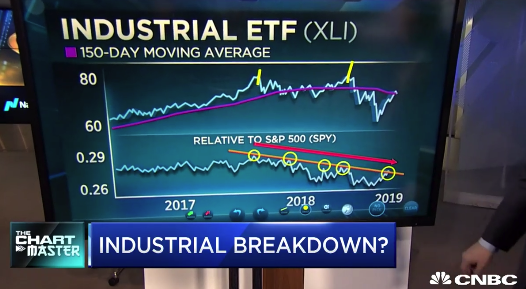 Carter made it clear that at the very least he thinks it is time to take profits in the XLI, or possibly short it. I asked Carter at 3 minutes into the segment about the outperformance by some of the top-weighted stocks in the etf like Boeing (BA), which makes up almost 10% of the weight of the XLI and is up 25% on the year already, up 38% from its Christmas lows and is trading at new all-time highs. I asked him whether it made sense for those who agree with his thesis to “pick on” or short some of the weaker names in the etf (like CAT or MMM) avoiding standouts like BA… his answer was interesting (paraphrasing): “BA has already exploited its potential to help the etf, possibly in a position to hurt it now”.

The chart of the XLI shows the last week’s pause right near what some technicians might term as important technical resistance, breakdown level in October, followed by rejections in November and December: 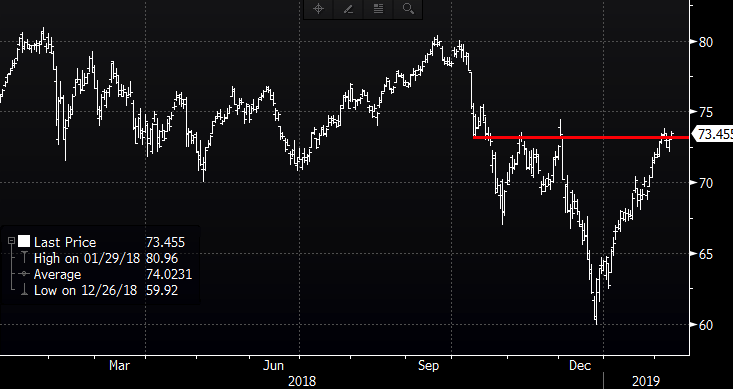 Short-dated options prices have come down considerably since the start of the year, in connection with the bounce in the underlying etf price, and very near the lows in late November before the 20% crash in the month of December: 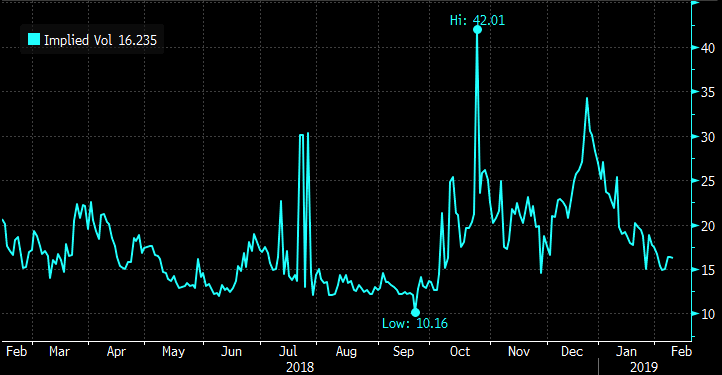 For those who agree with Carter’s technical call on industrials, and think despite the absolute move of late, that the waning relative performance to the SPX makes the XLI particularly vulnerable in the case of a fundamental hit to the group, which could be ground zero for a breakdown in trade talks with China, then defined risk long premium trades like put spreads out to April expiration make sense, for instance:

Rationale: this trade idea risks 2.3% of the etf price for a break-even down 2.9% with profit potential of up to 11% of the stock price if over the next two months the XLI is re-testing its December lows. The options market right now is saying there is about a 35% chance that this trade will be break-even on April expiration. While a one and three shot to merely get your money back is not fantastic, the risk-reward of near the money participation for a little more than 2% for two months is attractive in what is now a calm market that was preceded by one of the most violent one month sell-offs seen in the U.S. stock market in a very long time… with potential catalysts.