Disney (DIS) will report their fiscal Q1 earnings Thursday after the close. The options market is implying about a 3% move in either direction post results which is rich to its average one-day post-earnings move over the last four quarters of about 1.7%. With the stock at $112 the Feb 8th weekly 112 straddle (the call premium + the put premium) is offered at $3.30 if you bought that, and thus the implied weekly movement, you would need a rally above $115.30, or a decline below $108.70 to make money.

While shares of DIS matched the S&P 500’s (SPX) 20% peak to trough decline from its Q4 highs, the stock has not kept pace with the index’s 16.5% bounce from the December lows and is only up 2% ytd vs the SPX’s 9% gain. The one year chart shows the stock’s stall very near the midpoint of the six-month range, near $110 where the stock has found resistance and support over the past year: 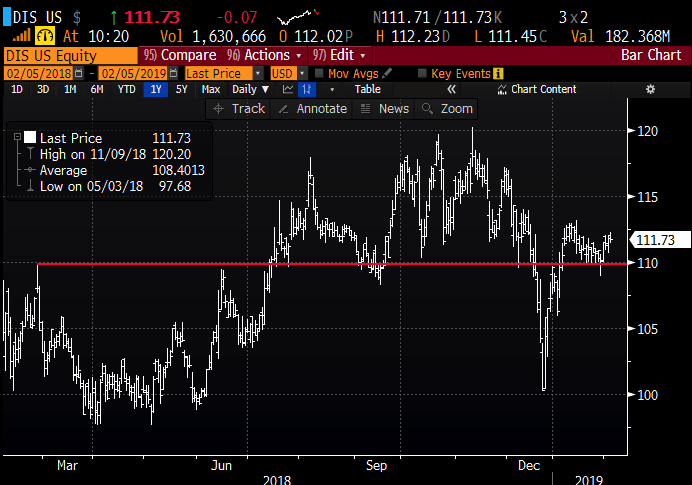 The five-year chart shows the last year’s consolidation in a slightly different light with the stock’s December low coming right at the five year uptrend, of what appears to be an ascending wedge formation with the stock now finding some support just above the downtrend from the all-time highs made in the summer of 2015: 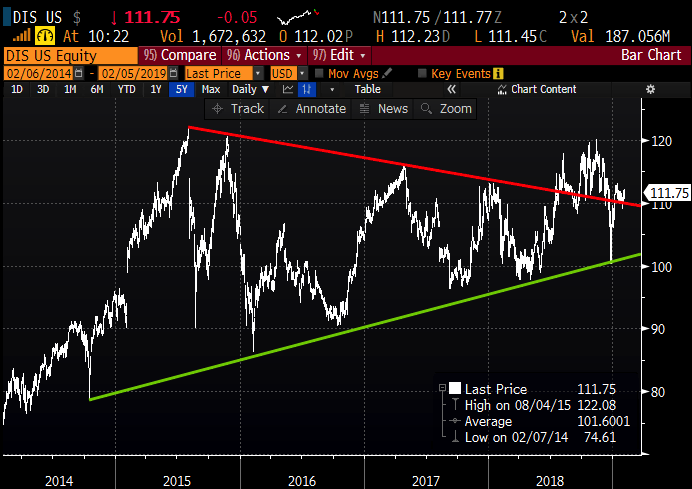 While there remains no shortage of unanswered questions as it relates to some very key initiatives for the company, most importantly their integration of Fox and their rollout of over-the-top streaming services in the coming year, there are also a good many identifiable catalyst, as described by Credit Suisse in a research note to clients on Feb 3rd ny their analyst Doug Mitchelson who has a Neutral rating with a 12-month price target of $114:

(2) Fox, which is highly strategic, should close soon, but it is initially quite dilutive (CSe: a $0.30-$.50 hit not in Consensus) and includes $35b in stock issued to Fox shareholders;

(4) an April 11th analyst meeting to discuss Disney’s OTT strategy (Disney+ market opportunity vs. costs), though Hulu strategy/spending is becoming the “elephant” in the room;

(5) by now the RSNs will have been sold, likely for a low price (the RSNs have challenging distribution renewals);

(6) Star Wars Galaxy Edge land launches this summer at Disneyland (and this fall at WDW–Hollywood Studios);

(7) back to back major ESPN distribution renewals could be difficult, but ultimately, along with the ACC Network launch and the 53rd week in FY19, drive a doubling of affiliate growth in FY20 (to 10%) before settling back to LSD growth in FY21 (no renewals, 53rd-week comp); and, finally,

My Take into the print: With all of the questions and catalysts I am hard pressed to think that investors do not give DIS management a couple quarters this calendar year to execute on these massive strategic initiatives that have been in the works for over a year. It would take some dramatically increased costs associated with OTT roll-out and messy Fox integration guidance for the stock to go materially lower. Trading just above a market multiple, the stock is very cheap to its historical multiples, but I suppose the ytd underperformance highlights investor trepidation on execution, plus the consumer discretionary exposure from the parks, which is a third of their sales.

So what’s the trade? The implied move is so cheap that for those with a strong directional inclination, the at the money put or call with the stock at $112 are each offered at about $1.65, or about 1.5% of the stock price, which seems dollar cheap. But as we like to warn, long premium directional trades with weekly options into events like earnings tend to be very binary, get the direction wrong and you are likely to lose most of the premium paid.

If I were cautiously optimistic, I might consider a call calendar, targeting the implied move, for instance:

This trade performs best with a gradual move towards the 115 strike over the next week and a half into Feb 15th expiration. If the stock is below 115 on Feb expiration the short 115 call will expire worthless and the trade will be left naked long the April 115 call. If the stock is close to 115 then the April 115 call should have appreciated as it will have picked up deltas. At that point it might make sense to further reduce the premium at risk by selling a higher strike call in April turning the trade into a vertical call spread. The max risk of this trade is the $2 in premium paid, and would be at risk with a large move below the current level, or well above the 115 strike.

Or If you thought the company will miss and guide down you might consider a 10% move back towards the December lows near $100 in the coming months, put spreads look attractive, for instance:

rationale: this trade idea risks 15% of the stock price for exposure down about 11% in the next 6 weeks, could be used as cheap protection for longs or an outright bearish bet.