Expedia (EXPE) will report Q4 earnings on Thursday, February 7th after the close. The options market is implying about a $9 move in either direction on Friday following results or about 7.5%, which is a tad shy of the 8.8% average over the last four quarters.

On January 3rd, following a negative earnings pre-announcement from Delta Airlines (DAL) I took a look at EXPE and its potential vulnerability to the headwinds faced by airlines, cruise lines, and hotel companies:

the price action in Airline stocks (getting hammered) on Delta’ss (DAL) revenue warning this morning, just two weeks after Carnival Cruise issued results and guidance that sent its shares down 10% on Dec 20th, just as the largest hotel operator by revenues, Marriot (MAR) first with new 52-week lows, down 30% from its year ago, and all-time highs.

While valuation relative to expected growth appears to be fairly reasonable for EXPE:

Wall Street analyst are expecting 18% eps growth on 10% sales growth for EXPE in 2019, while the multiple at 16.5x that expected growth is not unreasonable at all, slightly above a market multiple, but below its expected growth rate, I would add that there is likely a good chance that estimates remain high, and could be lowered when the company reports on February 7th.

The stock’s fairly 11.5% rally from the January lows actually underperforms the bounce in the broad market from the December lows, and the stock is now flirting with the fairly well-defined downtrend it has been in since making all-time highs in late July: 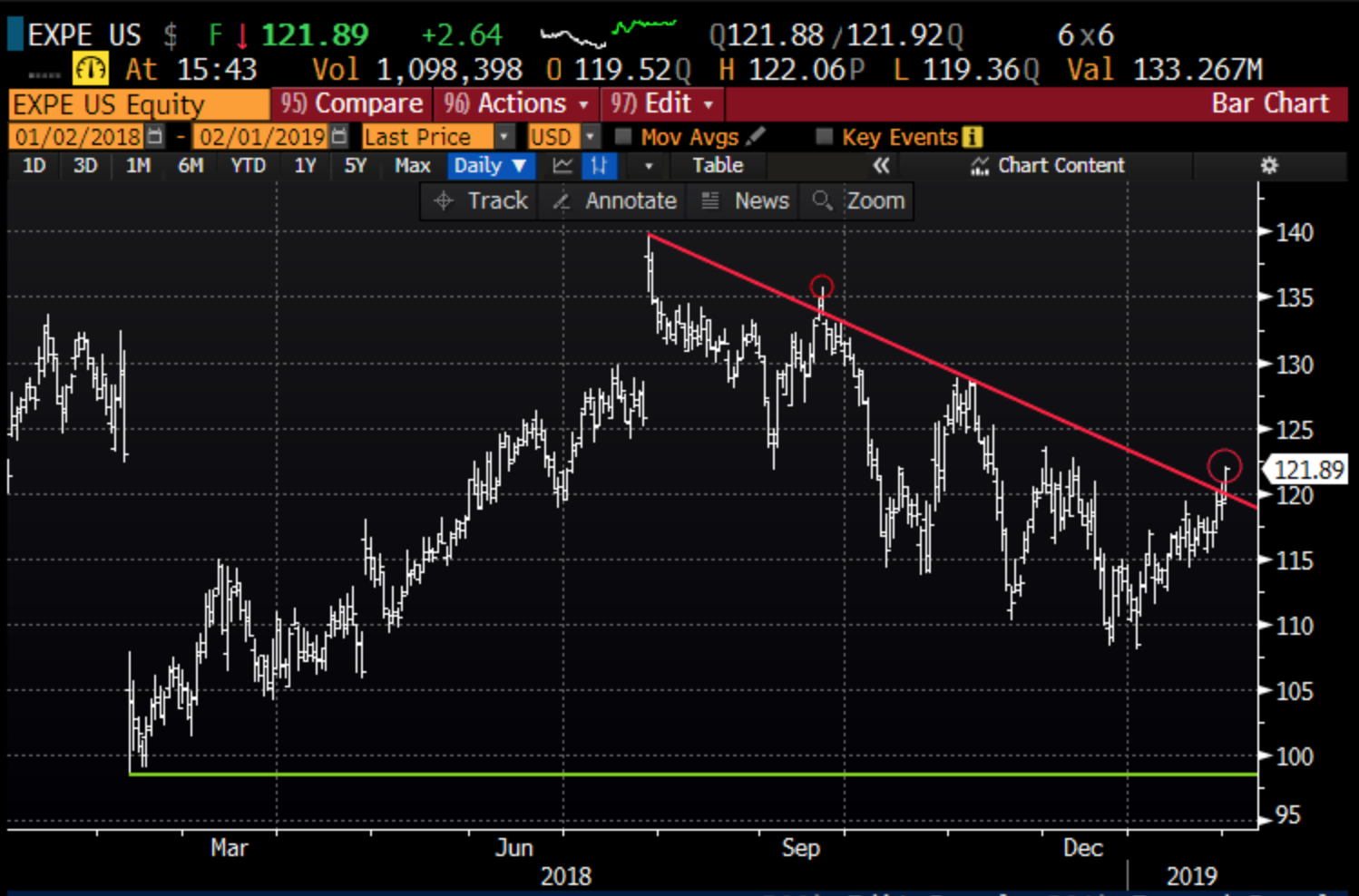 It took a fairly specific set of skills to detail a bearish trade idea when EXPE was trading very near the low of the month, and the trade detailed is now worth about a quarter of its original premium. This is no longer the trade that makes sense if one were looking to play for a miss and guide lower and a retest of the 52-week lows near $100.

But if you are new to the story and think that the poor results and commentary over the last couple months from Airlines, Cruise operators and hotel chains, coupled with the potential headwind of almost half of EXPE sales coming from outside the U.S, impacted by U.S. dollar strength, plus the generally weak data regarding global growth, then EXPE might set up as an attractive defined risk short into the spring.

Rationale: this trade idea risks 4% of the stock price to possibly make up to 16% if the stock is down 22% between now and April expiration.