Apple (AAPL) will report its fiscal Q1 results tonight after the close. The options market is implying about a 5% move in either direction or about $11, which is only a tad rich to the average one-day post-earnings move of 4.3% over the last four quarters, and the 4.5% average move over the last ten years.

The options market is implying about a 4.5% move in either direction, this after the stock has rallied about 10% since its Jan 3rd post-pre-announcement low, yet still down 33% from its all-time high made on October 3rd. Near term, the stock has mild technical resistance at $160, with what looks like clear skies up to $180, while $150 down to $140 appear to be sound technical support: 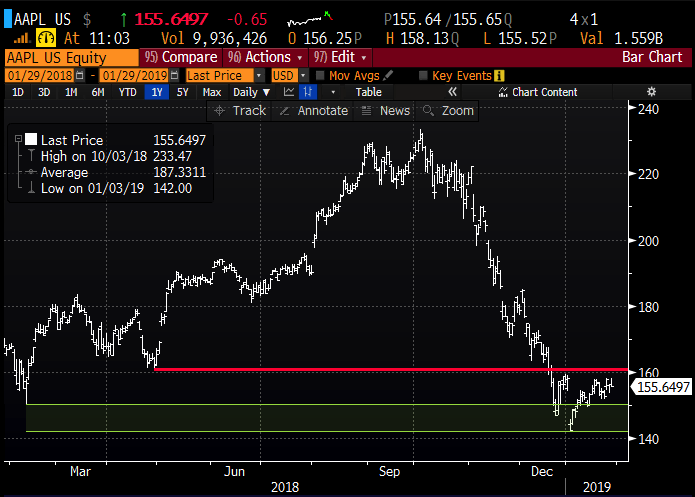 Back on Jan 2nd AAPL CEO Tim Cook issued a statement to investors, just two months after giving fiscal Q1 guidance that the company would miss those estimates, its first revenue warning in more than 15 years:

Cook highlighted no shortage of issues for the sales miss, from a strong dollar to staggered rollout of new phones to supply chain constraints, to elongated iPhone upgrade cycles, but the issue that most investors and market pundits keyed on was China:

we expected economic weakness in some emerging markets. This turned out to have a significantly greater impact than we had projected.

It strikes me that Sell-Side Hold ratings equal that of Buy ratings for the first time in a very long time, per Bloomberg:

One of those Buy rated analysts, Katy Huberty from Morgan Stanley noted a tad bit of caution into the print in a research piece to clients this past Friday, with key questions to be answered; why the deceleration in Services revenue and will the issues adversely affecting sales in the last quarter continue into FQ2?: 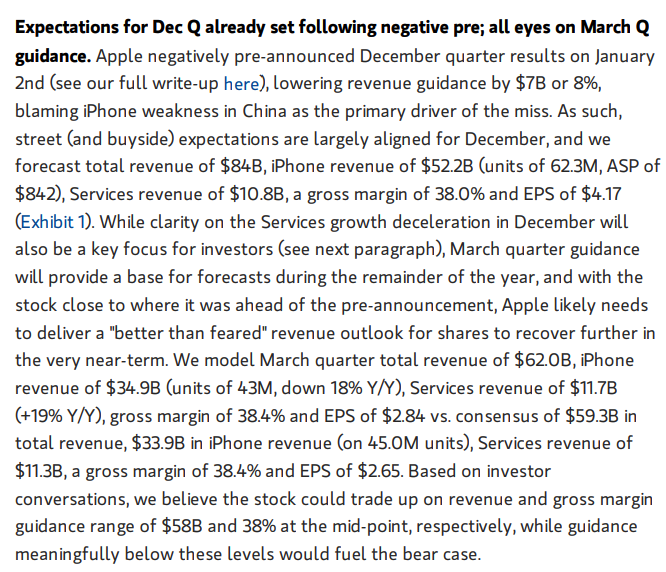 Earlier today, tech newsletter The Information took a look at AAPL’s Services business, and “the growing importance… once considered a sideshow for the company. They brought in $37.2 billion in revenue during fiscal 2018 or 14% of total revenue”: 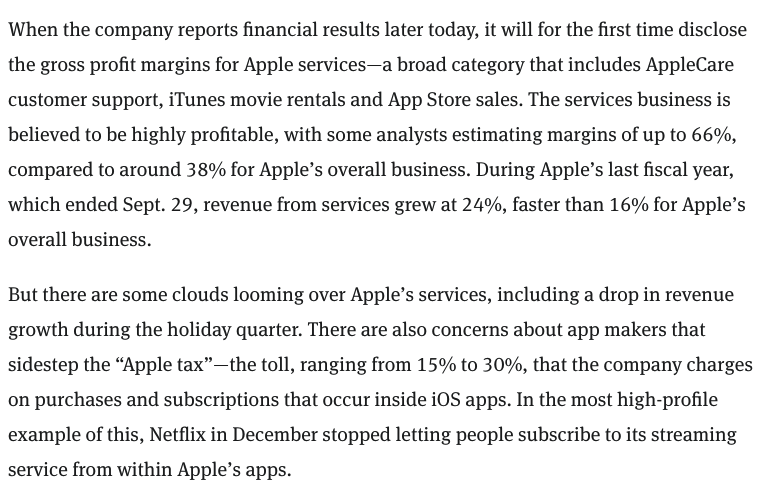 So we are going to get less transparency on iPhone unit sales and more on Services, that will show a higher level of profitability than their hardware, but its growth is reliant on the growth of their installed base, which is stalling.

MY TAKE INTO THE PRINT: On Jan 2nd I was shocked at the lack of visibility the company had when they had given their Dec quarter guidance on Nov 1st, one month into the quarter. While the stock had already sold off nearly 30% from Nov 1 to Jan 2nd, likely already incorporating negative investor sentiment, I would also be surprised if the conditions that caused the Dec quarter miss abated to the point that gave the company enough visibility and thus confidence to raise expectations for the current quarter.

It would take another meaningful guide down for the company to outperform the implied move to the downside.

It would take a very unexpected beat and raise for the stock to outperform the implied move to the upside, and that I suspect would be an opportunity for skeptical longs to trim their positions.

The most likely outcome is that the stock is up or down in the range of the implied move.

But given investors inclination on misses to shoot first and ask questions later, hedges for longs might be in order… for instance:

Profits of the stock up to 165, stock called away above that, but the long holder could always cover the short call for a loss to keep the long position in place.

Losses of the stock down to 146, protected below that.

Rationale:if you are long, more worried about a downdraft between now and Dec expiration, than a breakout to new highs, then this hedge idea makes sense for those looking to hold onto the position into the new year but want to define their risk to the downside.

Or for those looking to play for a bounce with defined risk consider call spreads targeting a breakout above $160:

Rationale: this trade breaks even up 5% (about the implied move for earnings), offers a 3 to 1 potential payout if the stock is up at 180 on March expiration.

Or If I were inclined to play for a miss and guide lower I would merely use weekly put spreads, risking what I am willing to lose, for instance: