2019 got kicked off with a massive revenue warning by the largest market cap company in the world Apple (AAPL) on January 2nd, specifically citing weakness in China. Intel (INTC) who is a customer to AAPL issued disappointing results for the Q4 and guiding the current quarter down, also specifically citing weakness in China. This morning we have a pre-announcement by chip maker Nvidia (NVDA), you guessed it also blaming China. While AAPL’s commentary is clearly a reflection on consumer spending for high-end smartphones, while INTC & NVDA’s results spoke to both consumer demand and enterprise spending.

Tomorrow after the close AAPL will report their full fiscal Q1 results, and investors will be very eager to see if CEO Tim Cook’s commentary has changed in just four weeks. The options market is implying about a 4.5% move in either direction, this after the stock has rallied about 10% since its Jan 3rd post-pre-announcement low, yet still down 33% from its all-time high made on October 3rd. Near term, the stock has mild technical resistance at $160, with what looks like clear skies up to $180, while $150 down to $140 appear to be sound technical support: 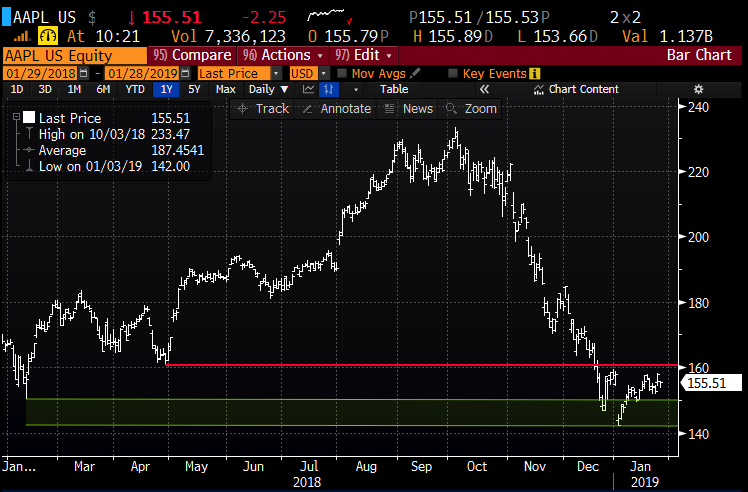 Microsoft (MSFT) will report their fiscal Q1 results Wednesday after the close, and this report, given their 50% revenue exposure outside the U.S., and their history of piracy and IP theft in China and the recent Bing hiccup in the country might put a special emphasis on their commentary in the country.

The options market is implying only a 5% move this week, or less than 5%, most for its post-earnings reaction Thursday, which is nearly double the average move over the last four quarters. MSFT is very near the mid-point of its 3-month range, since its all-time highs made in Oct, and its late December lows. What’s striking when looking at the chart is the series of lower highs, and the potential on a miss or guide lower for the stock to be back at near term support at $100 on its way back to the mid $90s. In this environment it would take a meaningful and unexpected beat and raise for the stock to be on its way back towards its prior highs: 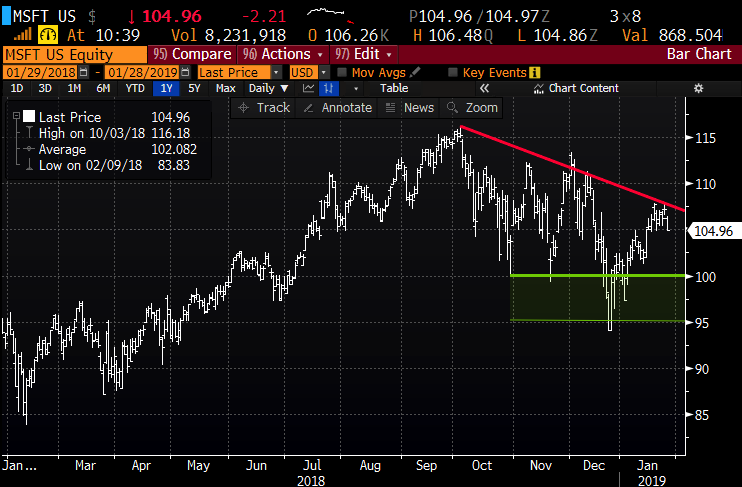 And then we get Amazon (AMZN) on Thursday after the close. The options market is implying about a $110 move this week, or about 6.7% in either direction, which is rich to the average of about 3.75% over the last four quarters, but below its 7% one-day average move over the last 10 years. AMZN is also at the mid-point of its 4-month range since its all-time highs made just above 2000 in early September, down about 21% since, but up about 22% in the last month. I would add that the recent breakout above the downtrend is precarious at best, and if the company were to miss the Q4 revenue guidance that they gave in late October, that was about 6.5% below consensus and were to guide down again for the current quarter, this stock will be back on its way to $1400. 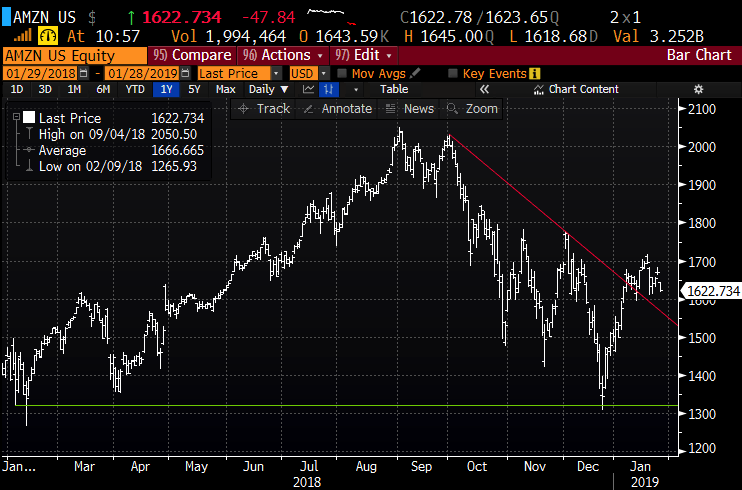 Regular readers know where I am going with this.. MAGA, not the political virus, but the concentration of MSFT, AAPL, GOOGL & AMZN in the Nasdaq 100 (NDX), and more importantly the crowding in these names over the last few years, and what had become investor reliance on these stock’s out-performance, which masked a lot of bad performance in the rest of the stock market. MAGA makes up nearly 38% of the NDX, or about $3.1 trillion in market cap, down about $4 trillion in September:

Its been my view that the broad market can not rally without a sustained recovery in MAGA, and if we lose stocks like MSFT that have out-performed its MAGA peers and the others are too languish, then the rotations that we see in other sectors in the S&P 500 (SPX) are merely like moving the deck chairs around on the studdering Titanic. The other groups just don’t have the ability to lift the broad market.

If you are inclined to think that AAPL, MSFT & AMZN were to all disappoint this week, then the way to play is with the QQQ, which appears to have just been rejected at the 4-month downtrend, wth the potential of another substantial break below $160: 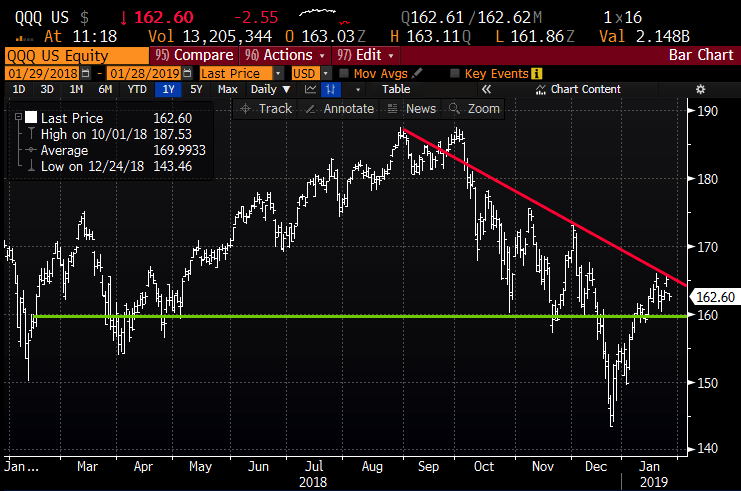 So what’s the trade? If you are inclined to isolate MAGA earnings (GOOGL expected Feb 4th) and think there is a strong likelihood that disappoints guidance by some or all takes the QQQ back towards the Dec lows, then consider Feb puts or put spreads.

Rationale: this trade idea risks 1.7% of the etf price, breaks even down 2.2% in 14 1/2 trading days and catches the earnings reports of its four largest components that make up 38% of the weight of the index.

I would also add that the Friday, Feb 15th is the self-imposed deadline then trump says he will either shut down the government again or take emergency measures to get funding for his wall. This could add a bit of downward volatility to the stock market.