Facebook (FB) will report their Q4 results Wednesday night January 30th after the close. The options market is implying about a $10 move in either direction or about 6.5%, which is shy to its 8.7% average over the last four quarters, but about in line with the 7% average since its public debut in 2012.

Shares of FB are up 14% on the year, and up about 21% from its 52-week lows made late last month. The one year chart shows the massive 19% one day gap from an all-time high in late July after the company issued disappointing results and forward guidance, and the subsequent 30% drop to its recent lows. The downtrend that had been in place since early August was recently broken this year, but the stock is now straddling what some might view as resistance, back at the March low and the November breakdown: 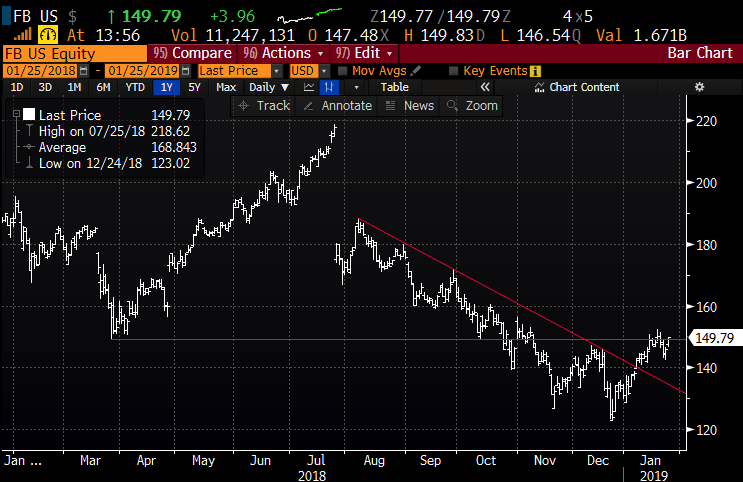 Despite the dramatic shift in investor sentiment over the last year, and the stock’s subsequent decline, Wall Street analysts remain overwhelmingly positive on the stock with 41 Buy ratings, 8 Holds and only 4 Sells. One reason why analysts might be clinging to their Buy ratings is the cut to 2019 earnings expectations have been fairly dramatic from a year ago, with consensus now calling for no growth in 2019, down from 20% last year, per Bloomberg:

The company has made it abundantly clear over the last year that they would be ramping up spending to get better control over user’s data, and systems to better identify and repel bad actors from their platform to avoid the sort of weaponization that took place during the 2016 U.S. elections.

What strikes me is that consensus estimates still call for sales to grow 24% in 2019 to $63.4 billion from last year’s expected $55.3 billion, which might assume that users have not disengaged with their many services and that advertisers have not left en masse. But the Q4 results and more importantly forward guidance will help answer this question.

One Buy rated analyst, RBC’s Mark Mahaney who has a 12-month price target of $190 highlights the following ‘Key Items to Focus On’ in the quarter in a note to clients today:

For a bull, Mahaney sounds pretty downbeat about Q4 and not overly optimistic that the company will raise guidance for 2019.

It is also worth noting the interesting timing of FB CEO Mark Zuckerberg’s op-ed in the Wall Street Journal today The Facts About Facebook,

making the case, again, that while the company collects data on their users, they don’t sell that data, they use it to make ads placed in your feed more relevant, and for the user’s security:

There’s no question that we collect some information for ads—but that information is generally important for security and operating our services as well. For example, companies often put code in their apps and websites so when a person checks out an item, they later send a reminder to complete the purchase. But this type of signal can also be important for detecting fraud or fake accounts.

We give people complete control over whether we use this information for ads, but we don’t let them control how we use it for security or operating our services. And when we asked people for permission to use this information to improve their ads as part of our compliance with the European Union’s General Data Protection Regulation, the vast majority agreed because they prefer more relevant ads.

Ultimately, I believe the most important principles around data are transparency, choice and control. We need to be clear about the ways we’re using information, and people need to have clear choices about how their information is used. We believe regulation that codifies these principles across the internet would be good for everyone.

Nothing really new here, but the timing is interesting.

And there was the New York Time’s Mike Issac who today wrote, Zuckerberg Plans to Integrate WhatsApp, Instagram, and Facebook Messenger, that would include end to end encryption for user privacy purposes byt also help streamline potential monetization efforts for the combined 2.6 billion users of these platforms:

By stitching the apps’ infrastructure together, Mr. Zuckerberg hopes to increase Facebook’s utility and keep users highly engaged inside the company’s ecosystem. That could reduce people’s appetite for rival messaging services, like those offered by Apple and Google. If users can interact more frequently with Facebook’s apps, the company might also be able to increase its advertising business or add new revenue-generating services, the people said.

For Facebook, the move also offers avenues for making money from Instagram and WhatsApp, which currently generate little revenue. Mr. Zuckerberg does not yet have specific plans for how to profit from integrating the services, said two of the people involved in the matter. A more engaged audience could result in new forms of advertising or other services for which Facebook could charge a fee, they said.

One potential business opportunity involves Facebook Marketplace, a free Craigslist-like product where people can buy and sell goods. The service is popular in Southeast Asia and other markets outside the United States.

The payoff of such a move is not without risks both near and long term, the costs associated with the integration could be substantial at a time they are dealing with massively increased expenses for security on their core platform, and of course, there will be increased scrutiny on user data:

privacy questions because of how users’ data may be shared between services. WhatsApp currently requires only a phone number when new users sign up. By contrast, Facebook and Facebook Messenger ask users to provide their true identities. Matching Facebook and Instagram users to their WhatsApp handles could give pause to those who prefer to keep their use of each app separate

So what’s my take? I want to be cautiously optimistic that the revenue engine is not broken at FB and that expenses as a percentage of revenues that shot up last year and are expected to not decelerate meaningfully in 2019 have maxed out. As Mahaney suggests, the company could miss their lowered guidance, and maybe there is one more cut, but that might be it for the time being. If you agree that the stock might be up or down in-line with the implied move of $10, but that the stock might be acting a bit better into the spring, then call calendars make sense, defining one’s risk, by selling short-dated out of the money calls, taking advantage of elevated near-term options premiums and using the proceeds to buy longer-dated calls of the same strike. For instance:

The ideal scenario is that FB stock is near 160 on Feb expiration and the short 160 call expires worthless or can be covered for a small amount and you are left long April 160 call for $3 or about 2% of the stock price.

The max risk of the trade is $3 on a sharp move lower than current levels or a sharp move above the $160 strike price.