Tonight after the close Starbucks (SBUX) will report their Q4 earnings. The options market is implying about a 4.3% move in either direction tomorrow. With the stock very near $65.50, the Jan 25th weekly 65.50 straddle (the call premium + the put premium) is offered at $2.80, if you bought that, and thus the implied move, you would need a rally above $68.30, or a decline below $62.70 to make money on tomorrow’s close, or about 4.3% higher or lower, which is basically in-line with the average one-day post-earnings move over the last four quarters.

Since gapping up 10% following better than expected Q3 results in early November, shares of SBUX have been rangebound in the low to highs $60s, now trading very much at the midpoint of the three-month range. I would also note that while the stock is down only 5% from its 52-week and all-time highs made in November, it is likely one of very few stocks in the S&P 100 that are as far away from their 52-week lows, about 40%. To my eye, the battle lines are clearly drawn, with $61 as support to the downside, and $69 resistance to the upside: 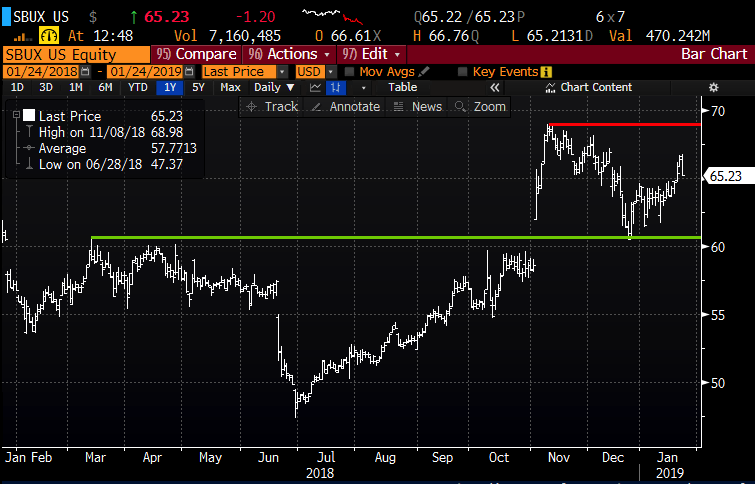 A quick gander at the five-year chart and it becomes clear that the stock is actually right now at a very significant technical level at $65, the level the stock gapped to following Q3 earnings, which was also the prior all-time high from 2017: 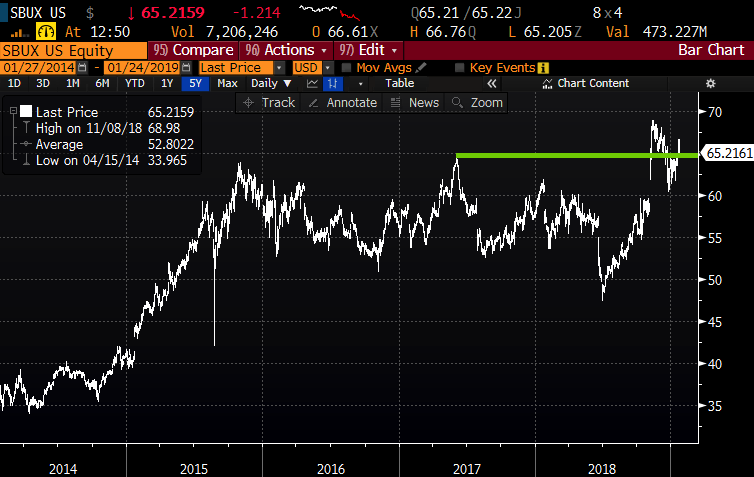 But don’t take my levels as gospel, I’m just a tourist when it comes to charts, my Options Action co-panelist Carter Braxton Worth, Cornerstone Macro Research’s all-star technical analyst took a crack at SBUX on this past Friday’s show and was very constructive, he thinks the stock gaps again post results tonight (click below to watch):

My other co-panelist, Mike Khouw detailed a simple defined risk way to play for the breakout Carter is calling for… with the stock near $65, the April 65 calls could be bought for about $2.50, with break-even in three months at $67.50, or up about 4%, less than the implied move for this earnings event: 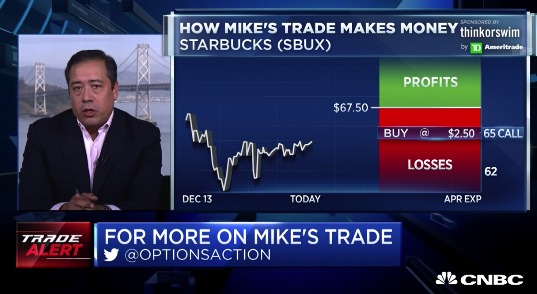 As I said in the video clip, this is a simple way to play for a new high.

What’s interesting to me about the SBUX story is that despite the stock’s strong performance year over year, coupled with its impressive relative strength, analysts are still mixed on the name with 19 Buy ratings, 15 Holds and 1 Sell with an average 12 month price target at $69, or just about the prior all-time highs. One reason for the hesitation might be that the stock trades near 25x expected 2019 eps growth of 10% on 6% sales growth with the potential for a backlash to U.S. brands in China as the trade skirmish presses on.

I would add one caveat to my comment on the show, despite seeing some pretty aggressive pops today following earnings results, I see little reason to buy calls in this market playing for similar, I suspect in the coming weeks we will be able to buy most stocks at lower levels. In the middle of the 3-month range, SBUX might remain in such a range until there is more clarity on the state of the U.S., European and Chinese economies.

But If I were long the stock and disagreed with Carter and thought there was a good chance the stock continues to consolidate, and worried for the unforeseen miss and guide down, then I might consider a collar… for instance

Gains of the stock up 2.50 with stock at 65.50 up to 68 (less the 30 cents in premium paid), stock called away there, but can always cover the short call to keep the long position intact.

Rationale: one would collar their long stock into a potentially volatile event like earnings if they wanted to stay long, willing to give up some potential upside near term for defined risk to the downside.