Today Bill Simmons, founder, and CEO of The Ringer dropped a fairly in-depth interview on his BS Podcast with Twitter CEO Jack Dorsey. The more than one-hour discussion almost entirely focused on the history of Twitter as a platform and as a product. What stuck out to me was Jack’s very clear acknowledgment of user discontent with misuse and abuse on the platform, and some of the longstanding quirks of the product. As a power user of the product, with nearly 6 million followers, Simmons didn’t pull any punches and speculated that Twitter has 9-12 months to get their act together before users start to revolt. As you might expect, the founder and CEO of the company would not put a timeline on when things could turn on them, as it has for Facebook in the last year, but he did acknowledge that they face a fairly “existential” crisis as a business… who are they and what are they going to be?

Back in November when it appeared the investment world had left Facebook (FB) for dead after repeated inadequate and inauthentic responses by the company to the what appeared to be a never-ending string of scandal in 2018, I suggested in a post (Loading Bird Shot) that there was a strong likelihood of investor discontent spreading to other similar companies/stocks in 2019 if the regulatory drumbeat increased:

While investors might initially fear the uncertainty of government regulation of free ad-supported social networks and platforms, I think it is safe to say that it will be the very thing that the keeps the existing dominant platforms dominating for years to come. The costs for startups to comply may prove to be crippling to already profit strapped upstarts, and in fact, impede innovation and competition. For the purposes of this conversation, I want to focus on Twitter (TWTR) not GOOGL, as TWTR falls into a group of companies far closer to an upstart that might be far more impacted by potential costs associated with regulation than that of GOOGL.

What struck me at the time was that TWTR stock had just had a very strong response to what appeared to be better than expected revenue growth of 29%, but Mark Mahaney, RBC Capital’s star internet analyst, who rates the stock a market perform/hold with a $32 twelve-month price target highlighted some reasons for caution heading into 2019:

At the time the most important takeaway for me was the 9 million decline in Monthly Active Users (MAUs) which management stated was the result of new regulations in Europe (GDPR). Could this be a precursor to what we would see in the U.S. in 2019 if political winds started to shift in this direction, especially in front of next year’s election? You might point out that the U.S. government is partially shut down, and there is no shortage of issues facing our country that might appear to be far more important than regulating data privacy for social media users. But one thing that is clear from Facebook’s testimony in front of Congress on two occasions last year, and that of Dorsey’s and Google’s parent Alphabet’s CEO, these guys know it’s coming eventually, and they might attempt to self-regulate in the meantime. Simmons asked Dorsey if he meets with the other “bosses” of the other platforms, using a little Godfather lingo, and what he was suggesting was just that, the leaders of the “five families” should meet regularly to set some rules for their criminal behavior. Jack seemed resistant to any behind closed door meetings as it is his belief that the opaqueness that has existed to this point (of their algos and incentives), has resulted in bad behavior on the platform will only be solved with future transparency (paraphrasing). Which leads me to believe that Jack and his management may take the sort of steps that Facebook did last year to avoid a redo of the 2016 election, which severely crimped profits and margins.

As I noted back in November, the decelerating Daily Active Users (DAUs) does not portend well for ad rates and future growth, while their margin guidance might prove to be a little optimistic. I guess we will know on Feb 7th when the company will report their Q4 results and guide for Q1. The options market is implying about a $4.40 move between now and the close on Feb 8th, or about 14% in either direction.

To my eye the one year chart of TWTR looks like and epic head and shoulders top, with $27 the neckline: 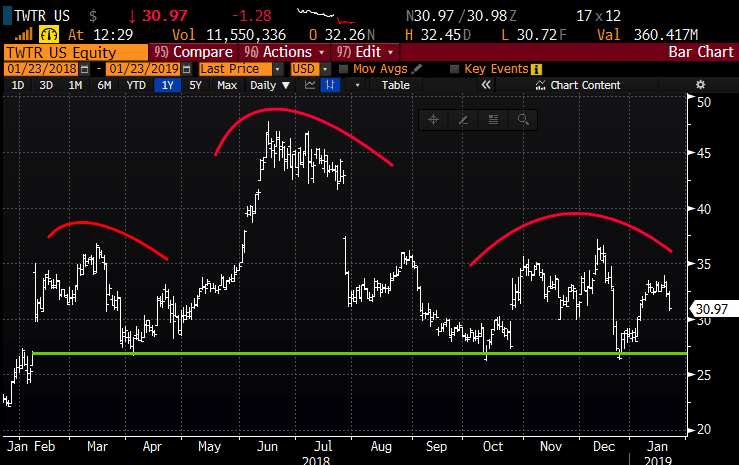 Back on Nov 20th, when the stock was trading a tad above current levels I detailed a put calendar as a way to leg into puts to that would catch the Q4 earnings in early Feb:

So what’s the trade? TWTR does not report earnings until Feb 7th, but I suspect the new Congress in January will start to make a lot of noise on regulation, which could continue to weigh on sentiment in the group. Any trades targeting a break-down below the neckline, and targeting the low $20s will need these catalysts. But options premiums are high, with the stock at $31.50 the Feb 31 put is offered at $3.20, or ~10% of the stock price. If you bought that you would need the stock below $27.80 on Feb expiration to just break-even.

If I were considering a move in the stock back towards support near $28 in the near term, and then a break below in the near year I might consider a put calendar, for instance:

With the short put strike in Dec expired this trade is left long the Feb 28 put, which is worth about $1.10 with the stock at $31. This trade idea kept you in the game, but now 10% to the strike, and 13.5% to the break-even level it makes sense to roll this view (ie close the Feb 28 puts) and look for a trade with a higher probability of success following Q4 earnings on Feb 7th. I don’t exactly love doing a roll on a day like today with the stock down 4%, but it may make sense to close the existing position and look for a better entry on an earnings trade. Stay Tuned.