Yesterday and today, two reports, one from the U.S. and one from China have raised the potential for a near term deal on trade, from yesterday’s WSJ:

U.S. officials are debating ratcheting back tariffs on Chinese imports as a way to calm markets and give Beijing an incentive to make deeper concessions in a trade battle that has rattled global economies.

The idea of lifting some or all tariffs was proposed by Treasury Secretary Steven Mnuchin in a series of strategy meetings, according to people close to internal deliberations. They say the aim is to advance trade talks and win China’s support for longer-term reforms.

China has offered to go on a six-year buying spree to ramp up imports from the U.S., in a move that would reconfigure the relationship between the world’s two largest economies, according to officials familiar with the negotiations.

By increasing annual goods imports from the U.S. by a combined value of more than $1 trillion, China would seek to reduce its trade surplus — which last year stood at $323 billion — to zero by 2024, one of the people said. The officials asked not to be named as the discussions aren’t public.

Investors like the thought of progress on the front of tariffs as the combination of any economic slowdown domestically from the government shutdown is only amplifying the pressures of the trade skirmish. 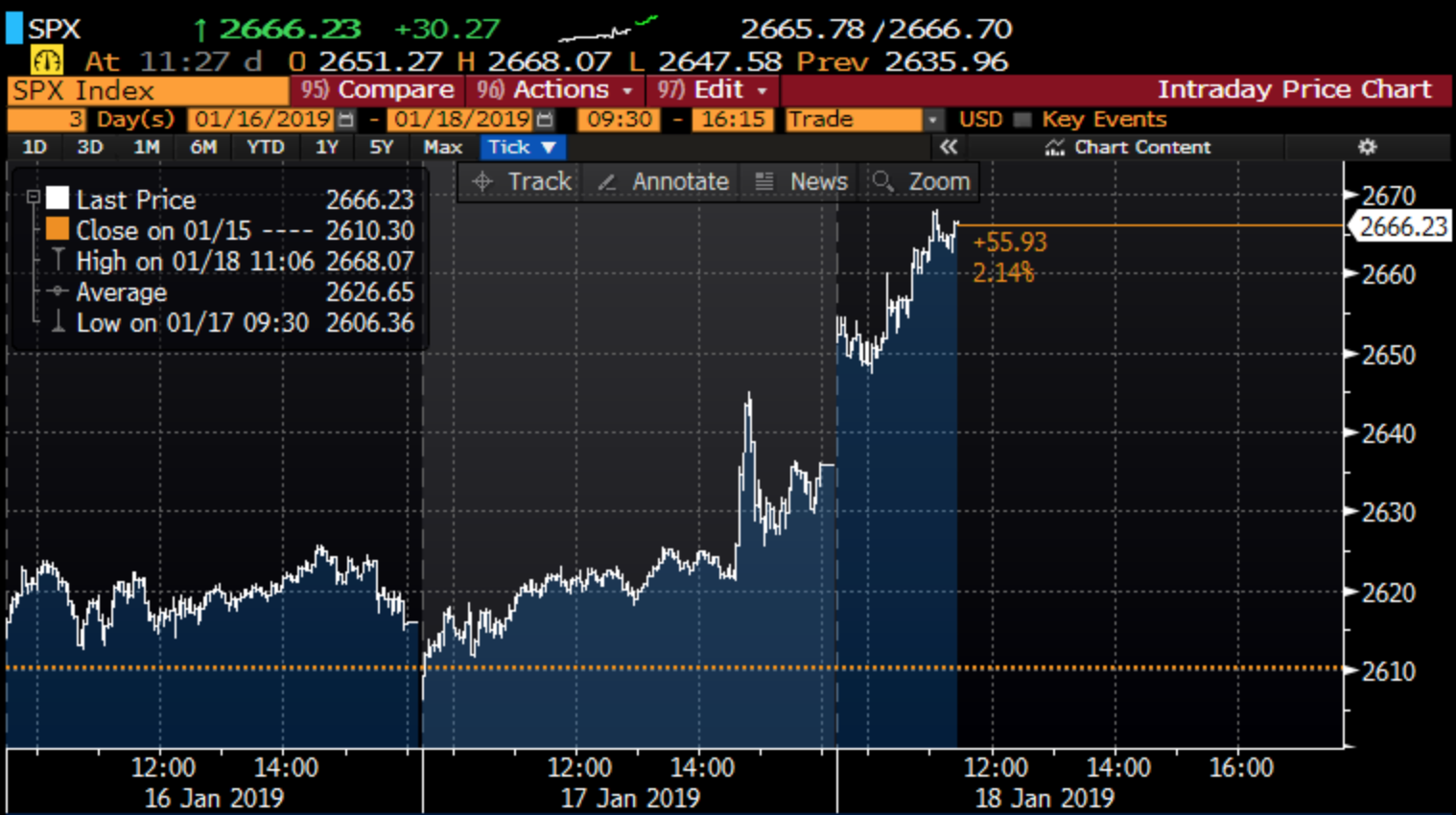 While any deal that focuses on existing tariffs, and those that trump has threatened to impose on March 1st, squarely trained on our trade imbalance with China will be seen as a modest victory in a decades-long dispute, the larger issue of fixing China’s forced technology transfer and IP theft will likely be a much taller order.

But in the near-term, any announcement that pushes out these sill self-imposed deadlines should relieve a good bit of investor skepticism on stocks like UPS, which at it’s lows last month, was down 33% from its all-time highs made in January 2018, when the investment community was convinced that the combination of massive corporate tax cuts in the U.S. coupled with synchronized global growth would lead to the next leg of a bull market and a sort of Goldilocks period for the global economy that was seeing a sort of passing of the baton from easy monetary policy to fiscal stimulus. The one year chart of UPS tells a slightly different story. But the stock today, up inline with the average stock in the S&P’s performance from the Christmas Massacre lows last month, is now butting up against important near term resistance: 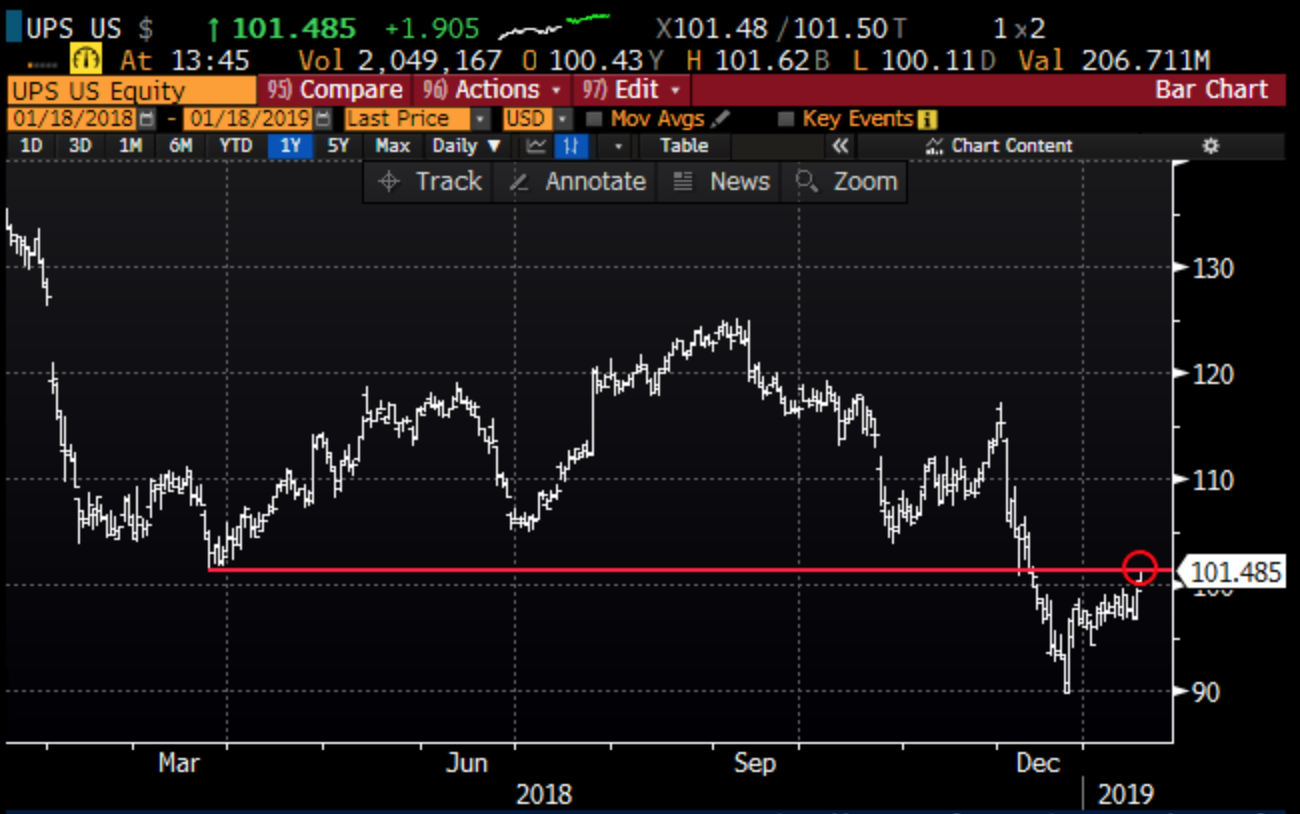 While UPS does not have the international exposure than its peer FedEx (FDX) at about 22% of sales, vs FDX at 33%, the pullback in the U.S. dollar and crude oil since they last reported in late October should help reduce some of the headwinds the company spoke to at the time. UPS trades at about 13x expected 2019 eps growth of 7% on 6% expected sales growth, which is near 10-year lows. 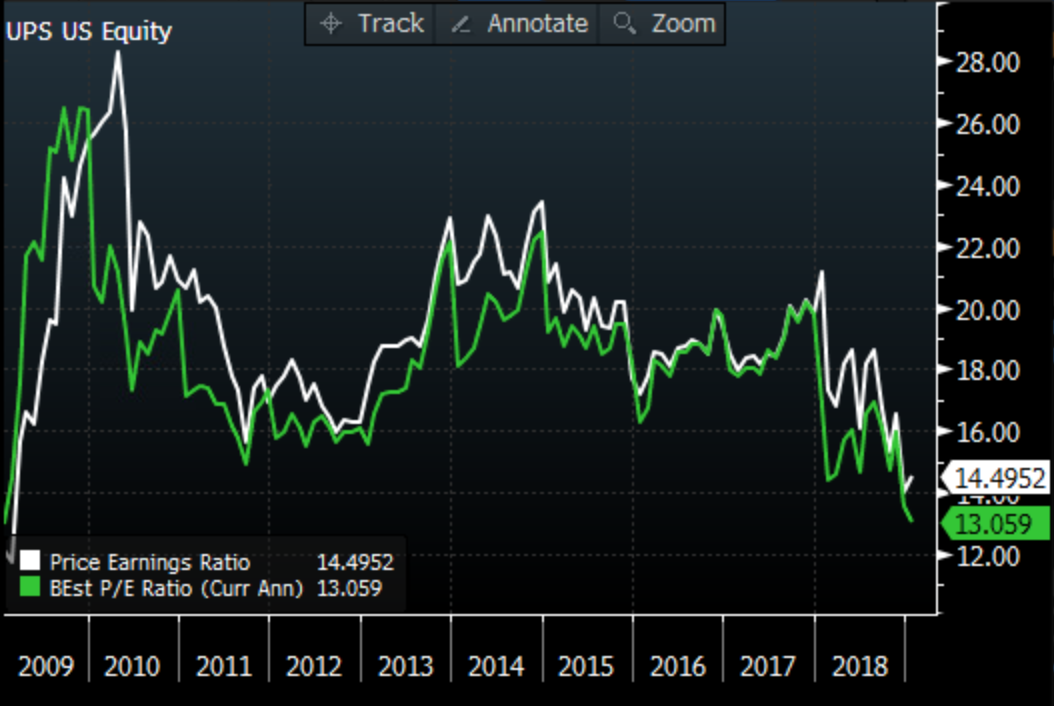 The next identifiable catalyst for UPS will be their Q4 earnings on Jan 31st, the options market is implying a 4% move or so. I think its safe to assume that investors are expecting a disappointing report, and the forward guidance may rely on the outcome of these trade negotiations.

SO what’s the trade? I think you look to sell an out of the money call in February expiration (that will catch earnings) and use the premium received to buy the same strike in March that should catch a trade resolution. For instance:

This trade performs best with a gradual move towards the 105 strike over the next five weeks into Feb 15th expiration. If the stock is below 105 on Feb expiration the short 105 call will expire worthless and the trade will be left naked long the March 105 call. If the stock is close to 105 then the March 105 call should have appreciated as it will have picked up deltas. At that point it might make sense to further reduce the premium at risk by selling a higher strike call in March turning the trade into a vertical call spread. The max risk of this trade is the $1 in premium paid, and would be at risk with a large move below the current level, or well above the 105 strike.