A couple times a week on CNBC’s Fast Money one of the traders do what we call a Fast Pitch, where we detail a long idea. Most of the time the ideas are in mega-cap stocks that are well known to our viewers, for instance, last night my co-panelist Pete Najarian made the case for owning Pfizer (PFE)… watch here. One thing that has been clear to me in my ten years of being a pundit on CNBC is that while viewers like hearing our day to day opinions on markets and stocks, they love hearing our ideas that include catalysts, fundamental and technical inputs (even if they don’t agree with them), and even in well-trafficked pharma names like PFE.

Last night we had a very interesting guest, not exactly a Fast Money investor, Cathie Wood, the CEO of investment firm Ark Invest. In the interview (watch below), Cathie made it clear Ark takes a 5 year time horizon (more like Slow Money) on investment ideas, focused on emerging technologies (like ev & autonomous driving, AI/ML, gene sequencing, blockchain to name a few). One area where Cathie got some initial pushback was 3D printing, but she made the case that the focus on the group five or so years ago when the stocks (DDD & SSYS) were hot was all wrong, that investors were missing the forest from the trees, that industrial applications for the tech, in areas like aerospace was the BIG opportunity, not consumer applications.

Cathie mentioned Stratasys (SSYS), and added that their products have been approved by the FAA to print parts for companies like Airbus and Boeing, and the combination of artificial intelligence and machine learning with SSYS printers that create “performance parts” can dramatically cut costs and weight. The addressable market is massive, less than 1% of aerospace parts are 3d printed now, Cathie thinks that can get to 20% in the years to come. She mentioned that SSYS trades 1.5x sales. I added that it has a $1.1 billion market cap, $350 million in cash and essentially very little debt. There is more detail on Ark’s thesis in the Big Ideas report for 2019 on their website (here) and it appears as of their last 13F filing that Ark is the second largest holder of the stock just below 13% of the shares outstanding. My disclosure is that I have not looked at or thought about the stock until she mentioned it last night, for a couple of years, and do not have a position in the stock or options.

About those sales. Since their 55% year over year ramp in sales in 2014, they have declined in each of the last four years, and expected to be up low single digits in 2019, per Bloomberg:

On a GAAP basis, the company is mildly unprofitable with an expected $10 million net income loss on $671.54 million in sales in 2018. So that $327 million in cash is one of the main reasons why this stock has been able to find some support at $20 for the last three years: 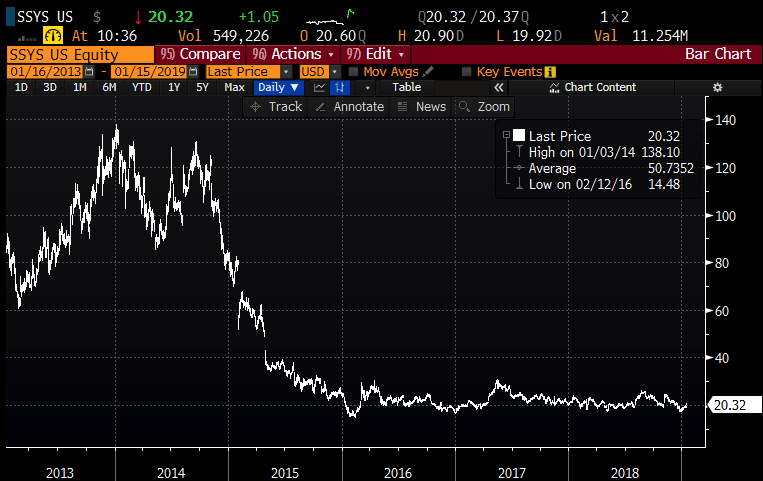 The stock is up nearly 7% today I suspect after Cathie’s mention last night, as there is a chance the stock has not been mentioned on CNBC in years and might have woken up some investors/traders to the idea. I always find it a bit nuts to see this sort of price action, but obviously SSYS has the makings of short term short squeezes given the stock’s 12% short interest, poor Wall Street analyst sentiment with only 2 Buy ratings, 8 Holds, and 3 Sells, relatively small market cap, but solid balance sheet and little to no press coverage, Another way to tell how today’s rally is the result of a little short squeeze is that traders are buying short-dated near the money calls, with the two most active strikes the Feb 20 and 22.50 calls which will not catch their Q4 results expected in the last week of Feb.

Options open interest is what you might expect for a $1 billion market cap company, sparse to say the least with a total open interest of only  20,000 contracts, with more than half expected to expire this coming Friday on January expiration. You get the point, they trade by appointment. 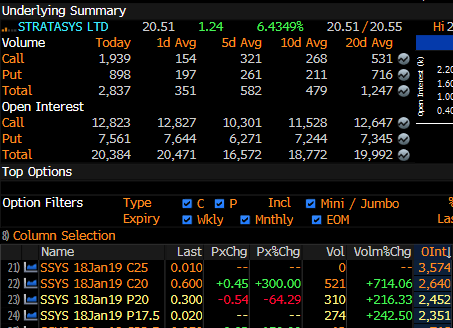 While the stock has spent the better part of the last three years near $20, the three-year chart shows that it has made a few short trips into the mid to high teens 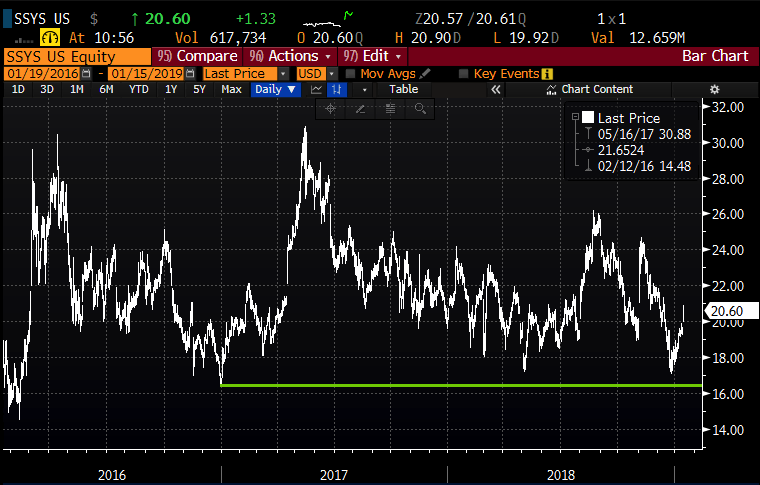 So what’s the trade? I don’t love initiating a new position on a day like today with the stock ripping for no reason aside from a bunch of traders remembering what a great momentum stock it was five years ago. But gun to my head here, If I were inclined to play for a move back to the mid to high $20s I might consider risk-reversals, selling an out of the money put to finance the purchase of an out of the money call or call spread. For instance…

Rationale: The stock has rallied from $17 the day after Christmas to just over $20 today, this is the sort of trade structure that offers some slippage on a trade entry. This trade will show losses mark to market prior to June expiration as the stock moves closer to the short put strike. It will also show losses in the form of decay if the stock were to stay at or near current levels. the trade should appreciate as it gets closer to the long call strike, but since there was premium paid for the trade that will be a function of how close it is to the 22.50 call strike and how much time there is to expiration.