Tomorrow before the open 18.5% of the XLF, the etf that tracks bank stocks will report earnings, JP Morgan (JPM) its second largest holding at 11.5% and Wells Fargo (WFC) at 7%.

The reaction to JPM, which most investors view as “best of breed” in the banking space tomorrow will be important, as Citi’s (C) 4% bounce today following its Q4 results has set the stage for higher expectations for the balance of the group after a period of very poor sentiment, despite the group’s recent bounce.

On Friday’s Options Action on CNBC, my co-panelist Carter Worth, chartist extraordinaire, made the case that relative performance in the XLF has been severely lagging for the last couple years, since the initial bounce in the couple months following the 2016 election, click below to watch: 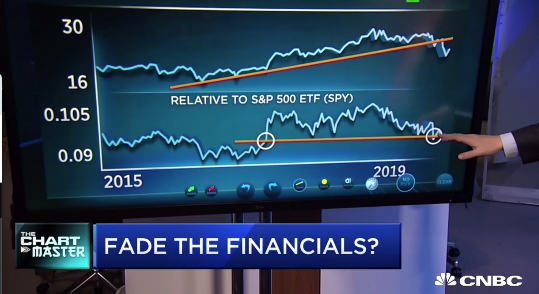 Carter also highlights the absolute performance of the XLF, and specifically the recent break below the lower bound of the downtrend channel the etf has been in… you know the old technical saying, past support becomes resistance. Well today’s bounce in Citi has caused the group to bounce, and now the XLF is above that downtrend: 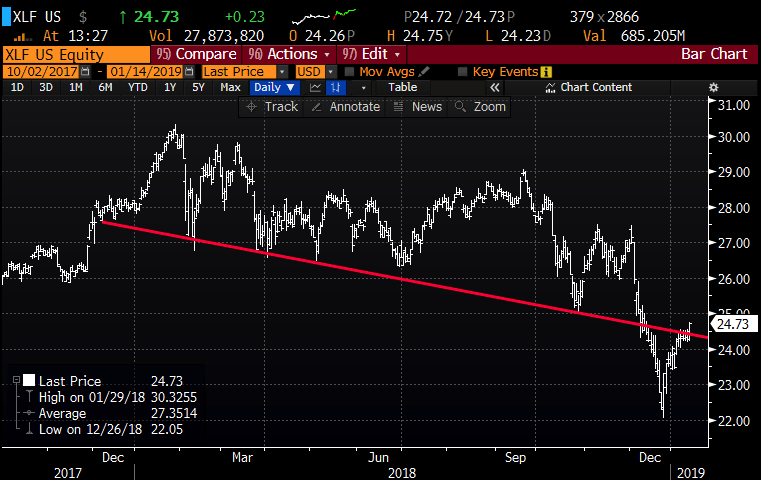 Does that mean that bears should get out of the way purely on technicals?  Well not so fast, cause that is just one line, there are others we can draw.  The three-year chart below shows how the XLF found support last month at the consolidation level after the one week rip Carter highlighted following the 2016 election. It also shows that $26 was fairly important support for most of 2018, and now that support might prove to be hefty technical resistance in the near term. Maybe the XLF, for the time being, is in a new trading range between $22 and $26: 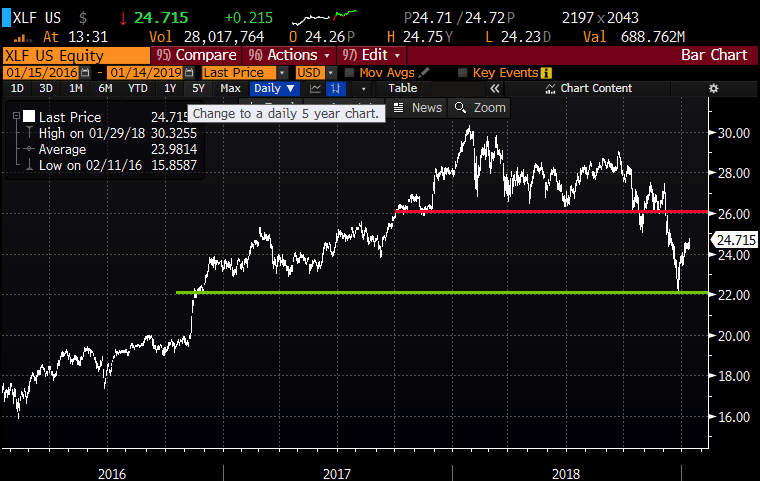 These technical levels might not be as random as many fundamental traders think. Take WFC for instance, the company has had no shortage of negative headlines over the last couple of years that have caused the stock to underperform most of its large-cap money-center bank peers, despite trading at a valuation premium to most (Ex-JPM). The stock was trading between $50 and $60 for most of 2017 and 2018 until it collapsed last month. It found support at its 2017 in the low $40s, but I’ll dollars to donuts, no matter how good tomorrow’s results or guidance are (or merely not as bad as expected), the stock should find some resistance at or around $50: 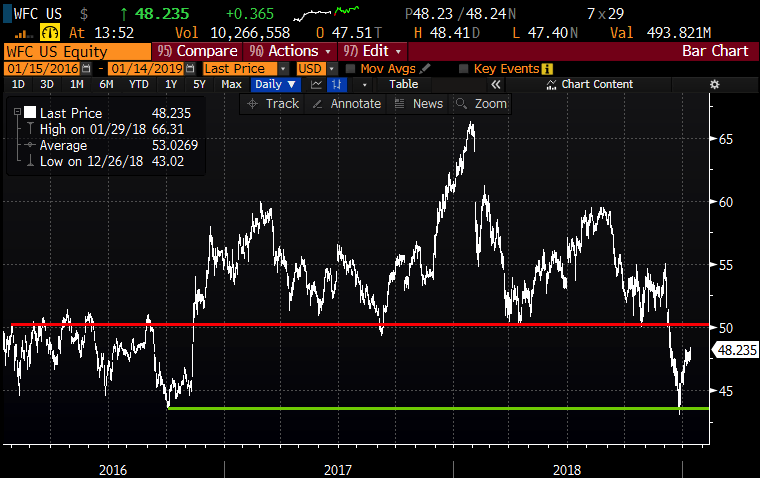 The last two charts speak to letting bank stocks rally a bit more, and that might make sense given how poor sentiment has been in the group, and for so long. Decent results from JPM and WFC tomorrow and then Bank of America (BAC) and Goldman Sachs (GS) on Wednesday and Morgan Stanley (MS) on Thursday and you likely have the XLF up a few more percent, closer to what looks like a very high probability fade.

Some traders might be looking at very near term resistance in the XLF, which would be at $25: 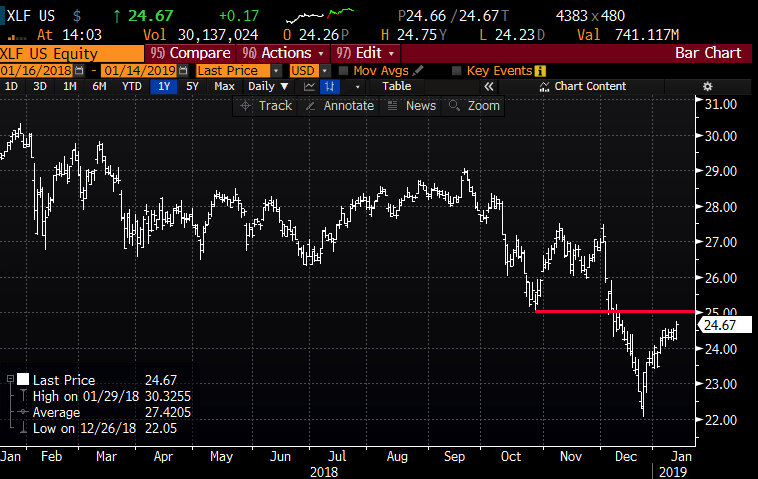 If you think that the today’s strength in the group, Citi in particular raised the bar for the rest of its peers this weeks, and that they are all not likely to have the same response as Citi, then just below $25 could be a good near-term short entry playing for a re-test of last month’s low.

So what’s the trade? I’d go with my other Options Action Panelist Mike Khouw’s idea from Friday’s show…