Barring any further unexpected pre-announcements, as we saw from Apple (AAPL) last week, Netflix (NFLX) will be the first mega-cap tech company to report Q4 earnings next week, Jan 17th after the close. The options market is implying about a $37, or 11.5% move in either direction between now and next Friday’s close. The stock has moved about 7.5% the day following the last four quarterly reports, which is well below the average of about 13% over the last ten years.

While this is a bit early to consider earnings trade ideas a week before the event in a volatile stock like NFLX, the stock’s nearly 40% bounce from it’s Christmas eve lows might present a trading opportunity into the print for those who think investors might get a tad more cautious closer to the event.

From purely a technical level the stock looks like a head and shoulders top, with the right shoulder having some fits and starts, with $250 as the neckline: 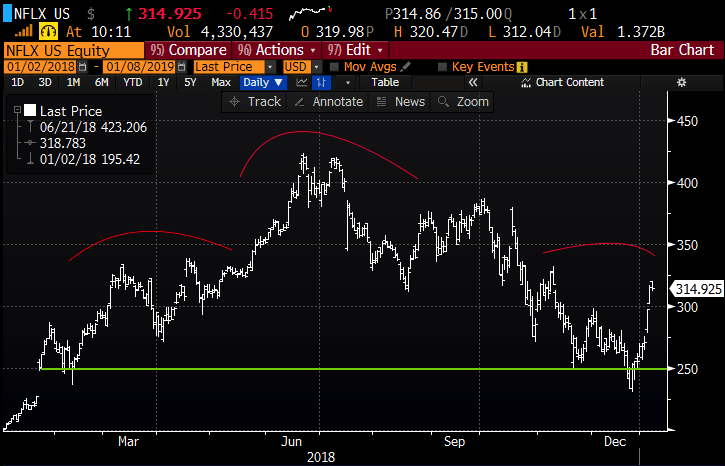 The stock’s volatility in the last year, up 100% at its highs in June, then suffering a nearly 50% peak to trough decline, and now the recent bounce from the lows has caused a very rapid rise in short-dated options prices, with 30-day at the money implied volatility at 65%, implying mid-ish-single digit daily moves, which is truly astounding for a $100 billion market cap stock. 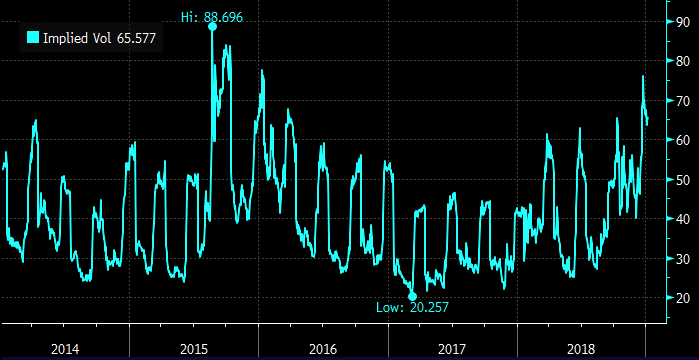 Interestingly IV is approaching levels not seen since 2015/2016 when the broad market saw its last bout of volatility, and NFLX was in the throes of its last meaningful correction before this one, albeit from much lower levels: 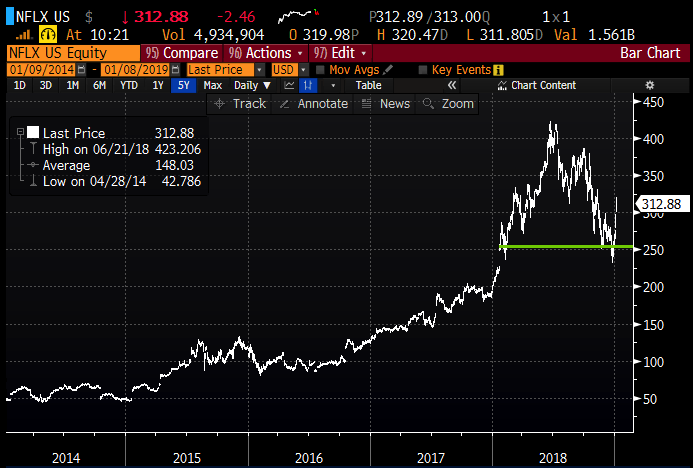 So what’s the trade? If I were inclined to play for a move back to the $250 neckline following next week’s results, I might consider the following defined risk strategy that I would most likely adjust the day of earnings if the trade was in the money on Jan 17 prior to results:

Rationale: this trade idea risks 3% of the stock price for a break-even down 7.5% on next Friday’s close following earnings. But this trade idea is really a defined risk bet between now and earnings that the stock will retrace some of its recent move and the profits for the pre-earnings decline will assist in financing a roll of another spread that will merely isolate the earnings event.

Disclaimer: for long premium event trades like this it makes sense to use a premium stop. For instance, if I were to get the near term direction wrong, and the put spread were to lose value, it makes sense to stop this trade out somewhere near 50% of the premium paid.

Lastly, I want to highlight a couple articles of late that might spell out some old concerns regarding original content and competition that might start to weigh on NFLX results.

From Recode and The Guardian:

Here’s what happens when the big media companies take their content off Netflix https://t.co/DqrHZS2vX2 via @Recode

Is the end of Netflix’s golden age in sight? https://t.co/soAZ3KrTBL pic.twitter.com/4jMZA7k3C4