On Friday’s Options Action on CNBC, my co-panelist Mike Khouw detailed a strategy for Apple (AAPL) holders who might be looking for “stock repair” strategies, in this case adding potential yield and/or leverage on their long stock in the coming months after the stock’s very steep decline. The options overlay detailed was a 1×2 call spread against long stock, effectively overwriting the existing long stock position (yield), and then adding an additional call spread for potential leverage, for no, additional risk, watch here.

As Mike described in the clip, the stock’s precipitous drop in the last few months has caused sentiment to get very bad in the stock, causing options prices to rise, making options sales attractive for a variety of reasons and with different objectives depending on existing positioning. The two-year chart below shows, 30-day at the money implied volatility (the price of options) in AAPL, just off of its multi-year highs near 45%, implying daily moves in the mid-single digits, vs just above 15% back in September when the stock was making new highs daily. There is a strong likelihood that volatility abates in the coming months, making options strategies that are net short vol attractive: 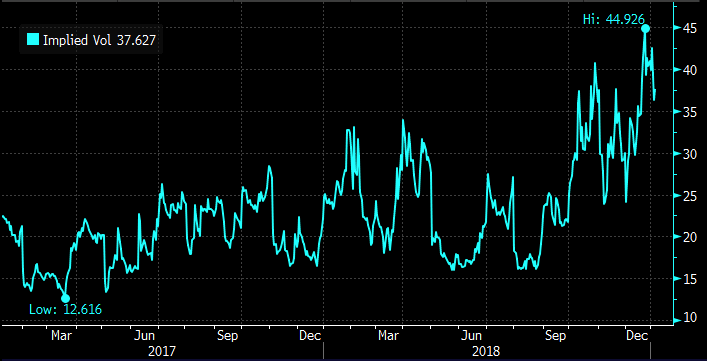 The idea for this strategy is to use high levels of options prices to create a zero cost overlay where the only risk, aside from the stock dropping further, a risk a long holder already has, is that the upside gains are capped at a certain level, but there is a trade-off, if the stock were to trade near the short strikes of the overlay on expiration, then you will have added the width of the call spread to the gains in the stock. Here was Mike’s trade idea vs AAPL at $147.50 on Friday’s close:

Losses of the stock below current levels, but because the 1×2 call spread cost nothing, the overlay adds no additional risk to the long stock position.

So I would think about this overlay this way, you have about 30% chance that the stock will be at 160 on March expiration, if you were to add this 1×2 call spread and have the 30% outcome on a date in time 2 months from now, then you have the opportunity to goose you gains by nearly 7%. Some might call this threading the needle.

My take… as you can tell by my face below, I like the idea, but I am not sure I loved the tightness of the strikes for a couple of reasons, most importantly that last week’s preannouncement only gave a limited amount of information and when the company gives it’s full fiscal Q1 result on January 29th, with forward guidance, the mood in the market might have changed, and the balance of the news might be a bit better, In that scenario a holder might have seriously limited potential gains of a bounce back. 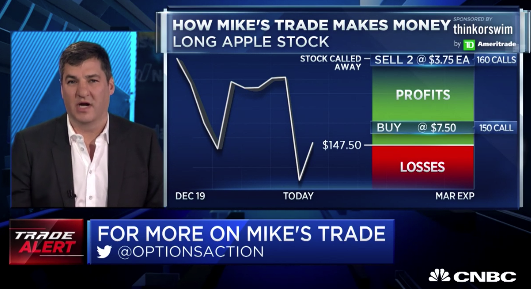 As most investors know by now, AAPL has been a very “special” stock, one that most long holders would be publicly shamed if they had suggested the stock was fully valued, or that the company’s core product offering lacked innovation and the market for it was saturated in most developed markets, or that the price point was too high, and that emerging markets like China will not provide the sort of endless growth for the company that most investors once thought. You get the point, but all of those “headwinds” plus many others collided since early October, and the stock that was once the most valuable in the world at $1.1 trillion in market cap, has since lost $400 billion, or the entire market cap of Facebook (FB).

So I guess where I stand on a strategy like this that caps potential gains, despite adding potential yield and leverage, is whether the probability of the best possible outcome at a certain point in time at certain price outweighs giving up the potential gains of a sharp reversal? I don’t have the answer for that, but regular readers know that I am fan of collars, selling an out of the money call, to finance the purchase of an out of the money put against long stock to create a band of defined risk to the downside, as a result of giving up some potential upside. IN this scenario, I am potentially getting something for what I am potentially giving up. And there is a very important distinction between collars and 1×2 call spreads, while they both look to use the selling of a call to finance the purchase of another option one is done when the investor is more worried about potential downside, while the other is done when an investor is ready to get a bit more aggressive on a long.

As for the technical set up in AAPL… To my eye, the stock has two fairly important technical resistance levels, first $160, the level that stock broke down from in December, and then was rejected at prior to the company’s massive sales pre-announcement last week. Above that there is $180, a level from early 2018 that the stock tussled with before breaking out from in May, finding support again in June, and then breaking down below following their Q1 disappointment in early November: 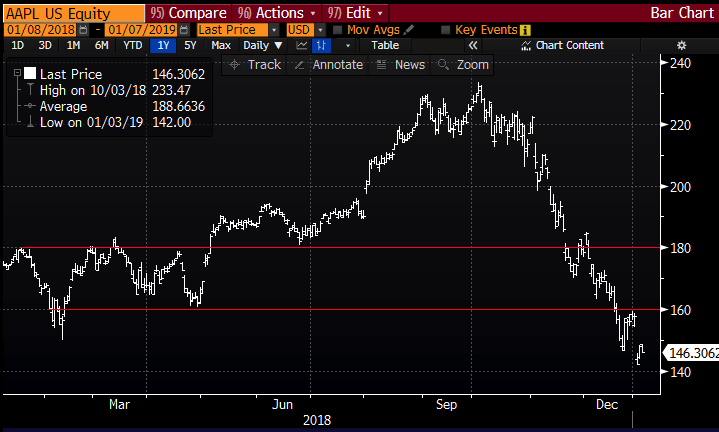 As I said in the clip on Friday, my sense is that these strikes could be a tad tight at just $10 wide, or 6.8% vs the two months duration of the trade, especially given how much the stock has dropped over the last two months. If I were long AAPL and that the stock had a potential for a bounce following its January 29th earnings report I might consider moving the expiration of Mike’s trade idea up a little bit, or if sticking with March possibly moving the strikes a bit higher. But as Mike mentioned those moves would likely result in a net debit on the overlay, which then adds to the risk of the existing position.

I thought this strategy was a good discussion topic after many investors are considering what to do with some of their once beloved tech stocks that have fallen on hard times of late. Zero cost 1×2 call spreads are one way to try to juice recovery of recent losses, and the worst case scenario, aside from the stock falling further is giving up some potential low probability gains.