Expedia (EXPE) had a fairly volatile year in 2018, after a fairly nasty start, with a 15% one day drop on February 9th following an earnings miss, a new all-time high made on an earnings beat in late July, only to close down 6% on the year: 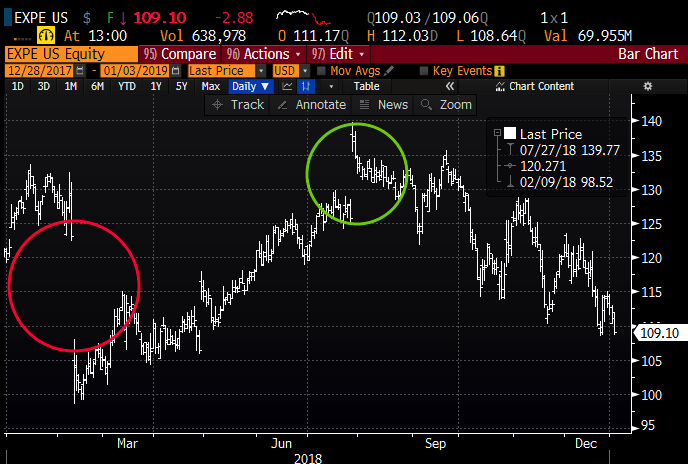 EXPE is catching my eye today for two reasons, first Apple’s (AAPL) massive revenue pre-announcement (considering other consumer discretionary sectors) and the price action in Airline stocks (getting hammered) on Delta’ss (DAL) revenue warning this morning, just two weeks after Carnival Cruise issued results and guidance that sent its shares down 10% on Dec 20th, just as the largest hotel operator by revenues, Marriot (MAR) first with new 52-week lows, down 30% from its year ago, and all-time highs.

If we want to extrapolate AAPL’s warning to other areas of discretionary spending I think it makes sense to look at the travel industry as a logical next step. As we already know, U.S. housing topped out more than a year ago, then we saw autos do the same, now $1000 smartphones, I suspect it is a safe bet that travel will be the next spot to take a hit.

Wall Street analyst are expecting 18% eps growth on 10% sales growth for EXPE in 2019, while the multiple at 16.5x that expected growth is not unreasonable at all, slightly above a market multiple, but below its expected growth rate, I would add that there is likely a good chance that estimates remain high, and could be lowered when the company reports on February 7th.

A look at the five-year chart of EXPE shows what might be an epic head and shoulders top pattern forming, with a neckline of $100: 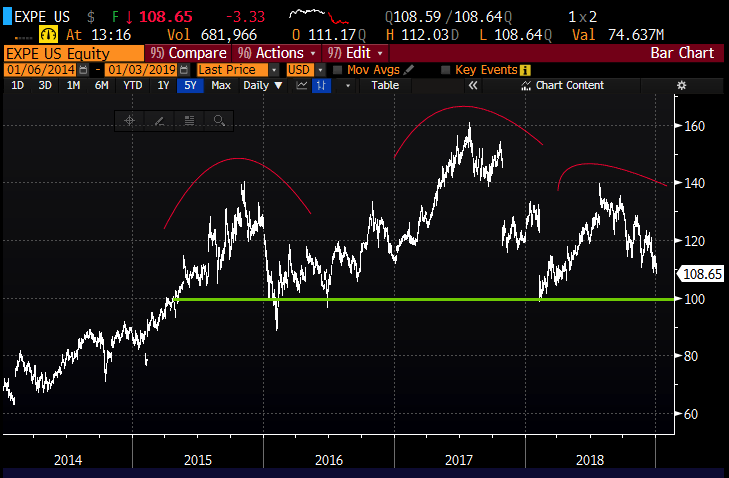 So what’s the trade? Target a post-earnings breakdown below $100:

Rationale: this trade idea risks 2.3% of the stock price to possibly make up to 7% if the stock is down 12.5% between now and Feb expiration. The options market is pricing about a 20% probability of that happening, and a nearly 30% chance of the trade being at break-even on Feb expiration. While that risk-reward is just ok, it comes down to a matter of conviction for a trade like this.