Nike (NKE) will report their fiscal Q2 results tonight after the close. The options market is implying about a 6.5% move in either direction (or about $4.50) which is rich to its 10-year average one-day post-earnings move of about 5%. With the stock at $68.50, the Dec 68.50  straddle (the call premium + the put premium) is offered at about $4.50, if you bought that and thus the implied movement this week for earnings, you would need a rally above $73, or a decline below $65 to make money.

From purely a technical standpoint, NKE has pulled back to an important support level, not only the consolidation level from Q1 2018 but also what appeared to be a launchpad to a runway breakout into the Sept highs after a two-year consolidation between $50 and $70: 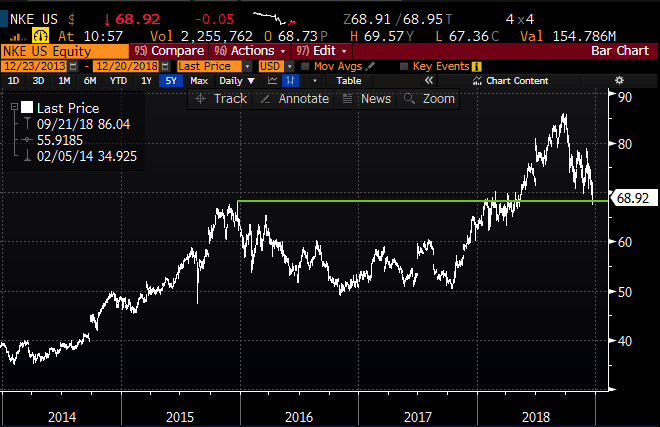 What will be of the particular focus of investors who will parse the company’s guidance is their reliance on sales outside North America, which accounts for close to two-thirds of their total given the strength of the U.S. dollar,  global growth concerns and of course the ongoing trade dispute with China, a country they are very reliant on for manufacturing and sales growth.

Shares of NKE trade at a hefty premium to the broad market at 26x expected eps growth of 12% on an expected 8% sales growth for the current fiscal year.

I am hard-pressed to think in the current market environment that NKE will be able to deliver quarterly results and offer guidance that will cause a bounce in the stock that is greater than the implied earnings move, and based on the reactions by Fedex (FDX) and Carnival (CCL) to disappointing results, investors are likely to shoot first and ask questions later.

So what’s the trade? If I were long NKE and worried about a greater than expected  move to the downside post results and into the new year given continued concerns about a ratcheting up of trade tensions with China I might consider a collar, selling an out of the money call and using the proceeds to help finance the purchase of downside puts. This strategy allows for an investor (long holder) to define their risk to the downside, participate to a point on the upside but most importantly keep their position intact. For instance…

Rationale: a long holder would put on a hedge like this if they want to keep their long position in place, but are willing to give up some potential upside for defined risk to the downside. Lastly, if the stock were at or above the short call strike then the investor has a choice with their long position, either cover the call for a loss and keep stock position or let get called away.

Also my co-panelists on CNBC’s Options Action laid out a bearish view on NKE into tonight’s print on last Friday’s show… watch below: 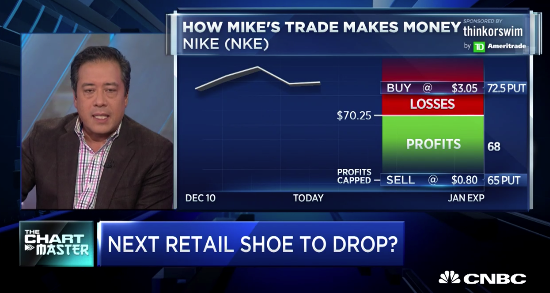 With the stock at $68.50 it makes to consider moving the strikes lower…