Micron (MU) will report their fiscal Q1 results tonight after the close. The options market is implying about a 8% move between now and Friday’s close. With the stock at $34.50, the Dec 34.50 straddle (the call premium + the put premium) is offered at $2.80, if you bought that and thus the implied move you would need a rally above $37.30, or a decline below $31.70 to make money. The stock has moved about 4% on average over the last four quarters, and about 6.6% the day following earnings over the last ten years.

Shares of MU are down about 47% from their 52-week highs made in late May, just a few ticks away from its 52-week lows yesterday, and down nearly 17% on the year. The stock is very near the only identifiable technical support which was the Sept 2017 breakout level that the stock went on to 100% gains over the next 9-months: 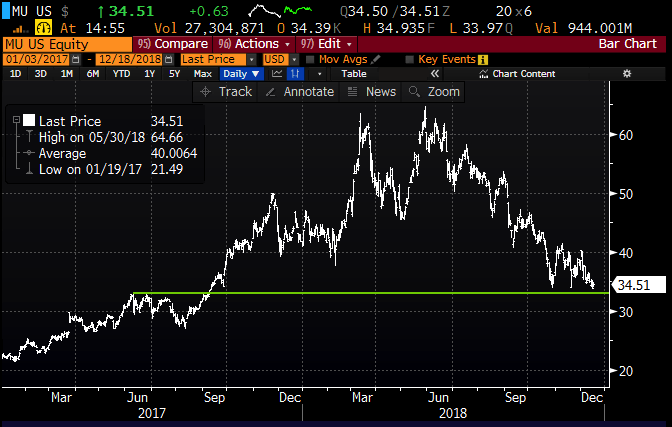 The other chart I would draw your attention to is the one dating back to 2012 that shows the 150% rally off of the 2012 lows, and the subsequent 75% decline from its late 2014 highs to its early 2016 lows. And then another 150% rally to this year’s high… the stock could very well overshoot on the downside again as it has done on two instances in the last six year to the upside: 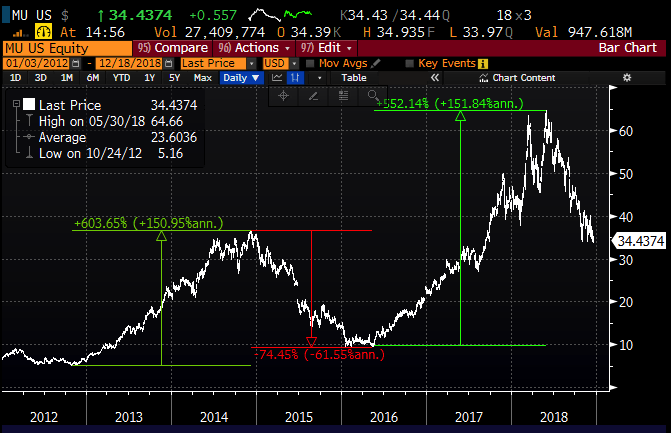 While longs of the stock might be sniffing an end to the recent precipitous drop, I would argue that the slightest bit of unexpected bad news and this stock will be on its way to $30, while a beat and raise will cause a near-term short squeeze, I suspect it will ultimately be sold…

What’s the trade? I might as well ask how much do you want to gamble and how much are you willing to lose??

For those with a directional inclination, and conviction, remember that the implied move is the sum of the at the money put and the call in the weekly options, so for those looking to make a defined risk directional bet, in this case if you were to buy the Dec 34.50 call for 1.40, or the Dec 34.50 put for 1.40, you would need a 4% move by Friday’s close.

As regular readers know we are not fans of flipping a coin into earnings unless one has an unusually strong conviction, as you need to get a lot of things right to merely break-even… direction, magnitude of the move and of course timing.