Tonight after the close Oracle Systems (ORCL) will report their fiscal Q2 results. The options market is implying about a 6% one day move tomorrow which is a tad rich to its 4 quarter and the 10-year average one-day post-earnings move of about 5%.

Shares of ORCL are down about 1.5% on the year, which slightly outperforms the 3% ytd decline of the S&P 500 (SPX). ORCL is down about 12.5% from its 52-week and all-time highs made in March and up about 9% from its 52-week lows made in June. I think it is important to note that ORCL massively underperforms some of its mega-cap peers who sell SaaS cloud-based services like Salesforce.com (CRM) and Adobe Systems (ADBE) which both sport $100 billion market caps and are up ~30% on the year and smaller SaaS vendors ServiceNow (NOW) and Workday (WDAY) which have $31 billion and $34 billion market caps respectively whose stock’s are up 34% and 56% respectively.

From a technical standpoint, $52 looks to be 1-year resistance, while $46 might prove to be important near-term support that could yield a move back towards the 52-week low on a break below: 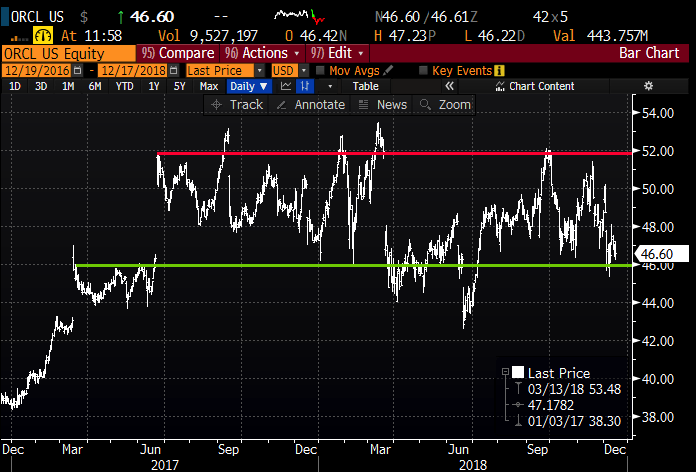 Wall Street analyst sentiment is very mixed, with 17 Buy ratings and 20 Holds. It appears that analysts are more compared with high growth, high valuation stocks that are up massively as opposed to a stock like ORCL that trades just below 14x on 8% expected fiscal 2019 eps growth on zero percent sales growth.

I don’t have very high expectations for a large beat and raise tonight, and I feel pretty similar to many other tech reports over the last month or so that there is a sort of 1 up 2 down risk-reward, where few stocks are being mightily rewarded for anything other than a pristine quarter and investors, are shooting first and asking questions later if they see anything they don’t like. I would add that late last month shares of CRM and WDAY had 10% plus rallies the day after earnings, but I think an important distinction is that both stock’s had just suffered a very sharp 25% peak to trough decline in a month on no news, just a broad market sell-off.

So what’s the trade? If you were inclined to play for a break of support at $46 this week post earnings I might consider a put butterfly in Jan expiration, targeting a move back towards the 52-week lows in the coming week… for instance:

Rationale: this trade idea risks ~1.5% of the stock price with a break-even down 2% that has the potential to profit of up to 7% if the stock is down 9% in about a month.