Costco (COST), the big box retailer will report fiscal Q1 earnings tonight after the close. The options market is implying about a 4% move in either direction by tomorrow’s close, which is above its ten-year average one-day post-earnings move of about 2%, and the 2.5% average over the last four quarters.  Since making new all-time highs in Sept, when the stock was up more than 30% on the year, it has since declined, but down only about 8%, actually besting the S&P 500’s (SPX) decline of 10% from its highs, with COST holding on to a commanding 21% ytd gain, massively outperforming the XRT’s (the S&P Retail etf) 2% decline, which places it down 20% from its 52-week highs made in August. Aside from Amazon.com (AMZN), COST is one of the very few large-cap U.S. retailers that is still up on the year.

To my eye, the stock appears to be in descending sort of wedge, with a fairly clear series of lower highs from the Sept highs, and fairly decent near-term support around $218, a level it has bounced from on five occasions since July. The risk to me appears to be to the downside in a market where rallies in the broad market are sold swiftly, and it has taken a meaningful beat and raises and very bad sentiment for stocks to even sniff their earlier highs: 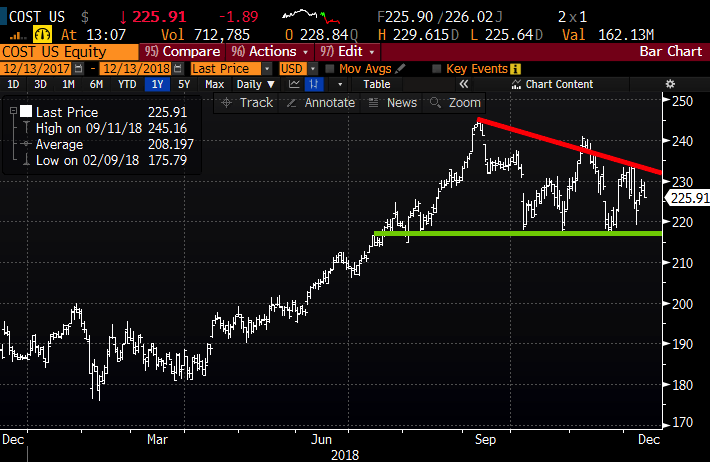 Shares of COST trade at nearly 30x expected 2019 eps growth of 9% on 8% expected sales growth, which seems kind of rich in an environment where the consumer could be nearing tapped out, and some of its main competition is being subsidized by local governments as it pursued not one but two second U.S. headquarters. I suspect we could be in for a more downbeat consumer spending environment in 2019 given the signals we are seeing from homebuilders, autos, iPhone units and now today airfares.

I would not be a buyer of COST into the print as I think there is sort of a 1 up 2 down risk-reward scenarios for single stocks into earnings. If all goes swimmingly then they will be lucky to be up in line with the implied move, if just meh then maybe open flat and trade down most of the day, and if miss and guide lower than gap lower and close at lows nearly 2x the implied move.

So what’s the trade? If I were inclined to play for a disappointment I would look to next week’s regular Dec expiration and buy put spreads… for instance…

Break-even on Dec expiration (next Friday):

Rationale: this trade idea risks 1% of the stock price for six trading days that include a potentially volatile event that the options market suggests could move the stock 4% in either direction tomorrow.