Adobe (ADBE) will report their fiscal Q4 results tonight after the close. The options market is implying about a 4.5% one day move tomorrow which is a bit rich to the average of about 2.1% over the last four quarters, but just shy of the 5% average one-day post-earnings move over the last 10 years.

Back in mid-November, following Nvidia’s (NVDA) 19% one day decline following their earnings I opined that ADBE could be the next high valuation, high growth name to take it on the chin if their results are less than stellar this month (read: The dark side clouds everything):

The question investors might have following results is whether or not the news is as good as it gets for a while for a stock that is expected to see meaningfully earnings growth deceleration (GAAP) from 54% in FY2018 to 20% in FY 2019, despite sales growth of 20%, the stock trades at nearly 11x those expected 2019 sales, 30x those expected earnings with the stock sporting a $117 billion market cap. Any whiff of those growth targets needing to be made up for in the back half of 2019 on the Q4 call and this stock is trading back near $200 in my opinion.

Oh, and the technical set up looked dicey given the broad market volatility and the increased scrutiny on high growth, ytd out-performers like ADBE; 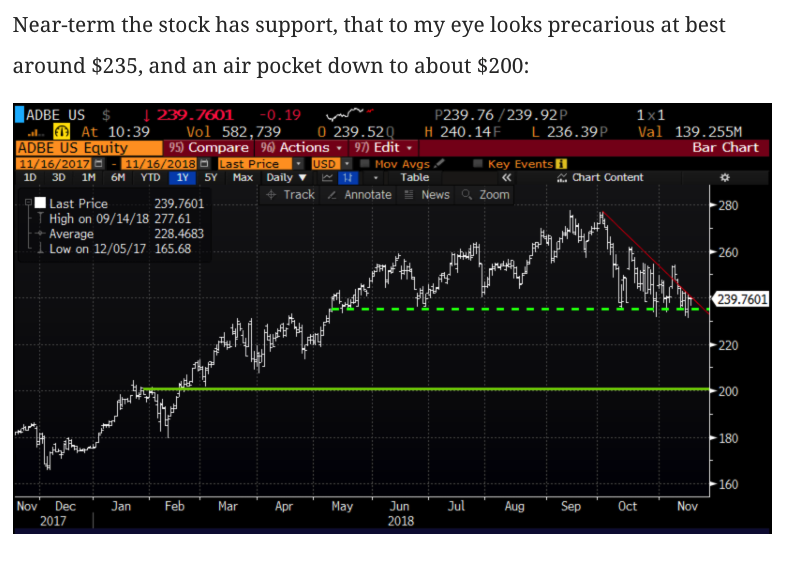 I detailed this view on CNBC’s Options Action the same evening:

Well, the stock did crater, dropping in two trading days the following week $30, but had a very quick rebound, and is now above the level where I detailed the trade idea and frankly the chart looks fairly constructive with $240 now looking like healthy near-term technical support: 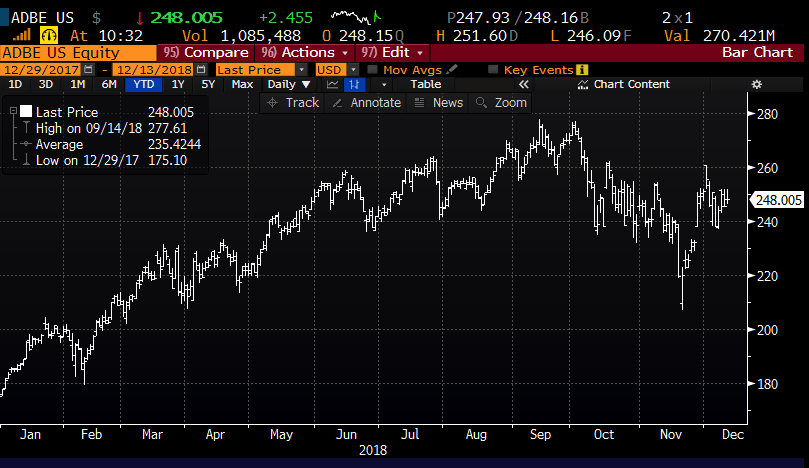 On Nov 16th I detailed a Dec put spread:

At its lows on Nov 16th this trade idea was worth more than 2x than the initial $8 premium paid, I updated on CNBC’s Options Action on Nov 30th:

With the stock at $247.50 with 6 trading days till Dec expiration, and the earnings even tonight, this trade is now worth about $3, or about 33% of the premium paid when the stock was $239. As I mentioned in the video just above two weeks ago, with the stock where it is, you need to be very careful holding this trade. At this point, I think it makes sense to close it as the break-even is at $227, down ~$20, or about 8.2%, nearly double the implied move. This is no longer the proper trade playing for a post-earnings decline, it is too far out of the money.

I would add one more point, since ADBE’s V reversal from the decline in mid-November, it has benefitted from strong results from SaaS peers Salesforce.com (CRM) on Nov 27th whose stock rose 10% after its fQ3, and Workday on Nov 29th whose stock rose nearly 13%.

So what’s the trade? To be very honest, the stock’s bounce back, and now relative strength in this group, (which I would throw Microsoft (MSFT) into the mix, which is only down about 6% from its 52-week and all-time highs made on Oct 3rd), the strong results from peers and a generally calmer place for high growth names, I am less inclined to press ADBE here into the print. Given what we know now it would take a material miss and guide lower for the stock to decline far greater than the implied move.

Profits of stock up to 260, gains capped there.

Losses of the stock down to 240, protected between 240 and 220 but suffer losses below.

Rationale: a long holder would only do this trade if they wanted to stay long the stock, but were more worried about near-term downside than near-term upside, and willing to give up some potential gains for fairly near the money downside protection to about 10% over the next 6 trading days into tonight’s potentially volatile event.

One last thing, if the stock were above $260, the short call strike, the long holder could always cover the short call to keep the long stock position intact and absorb the loss rather than have the stock called away at $260 on next Friday’s close.

And one more thing… the implied move of only 4.25% makes at the money calls or puts appear dollar cheap for those looking to make defined risks bets into the pint. For instance with the stock at $247.50 the Dec 14th (tomorrow expiration) 247.50 call is offered at about $5.25, or about 2.1%, if you thought the stock will rally tomorrow in line with the implied move, then playing for a $252.75 break-even looks dollar cheap, with those with conviction. The same holds true for the Dec 14th weekly 247.50 put.

But I’ll offer our normal disclaimer, for long premium, short-dated trades into events like earnings, you need to have tremendous conviction, and get a lot of things right to just break-even, like direction, the magnitude of the move, and timing.