Earlier today UPS’s CEO David Abney was on CNBC’s Squawk on the Street with a cautiously optimistic outlook for the U.S. economy, a calming of the trade dispute with China and his own business in the fairly critical months of November and December:

While Abney mentioned that the Holiday season is off to a strong start, having hired 100,000 seasonal workers to help do Santa’s work, investors have yet to take notice with the stock trading very near its 52-week lows, down 25% from its 52-week and all-time highs made in mid-January, and trading down 15% on the year. The stock is dangerously flirting with three-year technical support near the nice round number of $100: 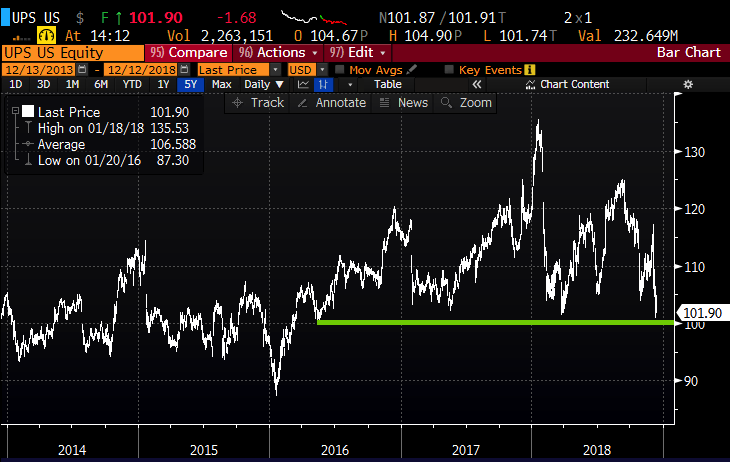 If UPS is in fact off to a strong start, and the stock’s ytd and most importantly recent collapse is more than discounting investors worst fears, then the stock looks pretty darn cheap trading at 13x that next year’s expected 12% eps growth on 6% expected sales growth, sporting a 3.5% dividend yield and a reasonable share repurchase program that should equal about $1 billion for 2018.

UPS and its main competitor, whose stock has actually fared worse in 2018 (down 24% ytd and down 31% from its all-time highs made in January) appear to be caught in the hailstorm if uncertainty that is the trade skirmish with China and what appears to be slowing growth in Europe and Asia. If there does not appear to be a resolution to within the 90-day window that Trump and China President Xi outlined at the G-20, and economic uncertainty continues to weigh on the global economy than stock’s like UPS are likely to break multi-year support. But the flip-side is true, if there is a substantive agreement that does not further kick the can down the road, and analysts who are pretty mixed on UPS (11 Buys, 17 Holds and 2 Sells) have reason to look at more than just cheap valuation, but are able to re-rate the stock based on growth, then UPS could set up as a decent long into their Q3 results that should come the last week of January.

So what’s the trade? If I were inclined to make a contrarian bullish bet in UPS I might look to target Q4 earnings as the catalyst to either put up or shut up. But given elevated options premiums given the broad market volatility and UPS’s own recent collapse, long premium directional trades look challenged. I might consider a call calendar, selling shorted dated out of the money calls to help finance the purchase of longer-dated out of the money calls of the same strike that will capture the identified catalyst, for instance…

This trade performs best with a gradual move towards the 110 strike over the next five weeks into Jan 18th expiration. If the stock is below 110 on Jan expiration the short 110 call will expire worthless and the trade will be left naked long the Feb 110 call. If the stock is close to 110 then the Feb 110 call should have appreciated as it will have picked up deltas. At that point it might make sense to further reduce the premium at risk by selling a higher strike call in Feb turning the trade into a vertical call spread. The max risk of this trade is the 95 cents in premium paid, and would be at risk with a large move below the current level, or well above the 110 strike.

Rationale: this is a very hard market to merely buy puts or calls depending on one’s directional view. If things were to calm down in the broader market, you could get the directional right, but the ensuing vol suck out of options premiums could make it very hard to make money.

This trade idea risks less than 1% of the stock price to have some upside exposure for two months leaving a good bit of optionality if the stock holds here at support or can rebound a bit over the next month.