Shares of Coca-Cola (KO) are outperforming the S&P 500 (SPX) fairly aggressively in 2018, up nearly 8% vs the SPX which is down about 1%. You know the drill on consumer staple stocks in turbulent equity markets, they catch a bid… but as the WSJ highlighted in late October that KO’s investments in other categories away from soda are paying off as their “organic sales rose a solid 6% from a year earlier in the third quarter with growth across most beverage categories and markets“. They went on to say that despite higher input and shipping costs, and dealing with the adverse effects of the strong U.S. dollar on foreign sales (more than two-thirds of their sales come from outside the U.S.) the company is “weathering” the global storm on the back of strong North American trends.

That’s all fine and good, but the stock trades at 24x trailing 12-month eps, and 22.2x forward that is expected to grow at 7%, both at least a decades-long high, per Bloomberg: 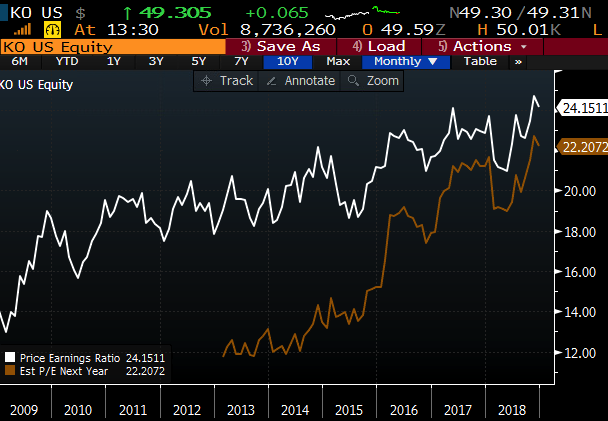 I am not sure why someone would pay that far above a market multiple for a company like KO, when Apple (AAPL) which is down 27% from its all-time highs made in early October which trades at half the PE.

There was some interesting activity in long-dated KO options today… when the stock was $49.50 there was a buyer of 35,000 of the Jan 2020 $40 puts, paying $1 to open, or $3.5 million. If these are outright, they would break-even down at $39 down 21% on Jan 2020 expiration, about 13 months from now. Obviously, these puts could be protection for a long, but as we always say about unusual options activity like this, we really have no way of telling what the trader’s intent of the trade is or what it may be against. For instance, maybe this trader is long 3.5 million shares of stock and looking for some dollar cheap protection. These puts have only a 15 delta, which means that the options market is only placing a 15% probability that they will be in the money on Jan 2020 expiration. Not a convicted way to play for a sell-off, but might be an easy way for a huge KO bull to get his risk manager off of his back.

As for the chart, wow, that was a heck of a breakout after a lot of sideways action for most of this year:

And the five-year chart, a series of higher lows and higher highs, a seemingly nice uptrend:

But it’s those higher highs that have me looking twice, as all three were followed by precipitous drops of about 10% in less than a couple months from the new highs.

So what’s the trade? Let’s play for a 10% drop in the next two months…

Rationale: this trade idea risks 2% of the stock price to possibly make 8% if the stock is down 10% in a little more than two months that will catch their next earnings event in mid-February that could serve as a last-ditch catalyst.