Lululemon (LULU) reports their fiscal Q2 results tonight after the close, the options market is implying about an 11% one day move tomorrow that is basically in line with its average one-day post-earnings move over the last four quarters. The post-earnings movement has been off the hook look below at the far right column that says % px chg, that is the one day move after earnings dating back to Sept 2015, off the hook:

Despite being down about 20% from its 52-week and all-time highs on October 1st, shares of LULU are still up a whopping 65% on the year. The stock’s recent bounce off of $120 two weeks ago highlights what appears to be obvious near-term technical support: 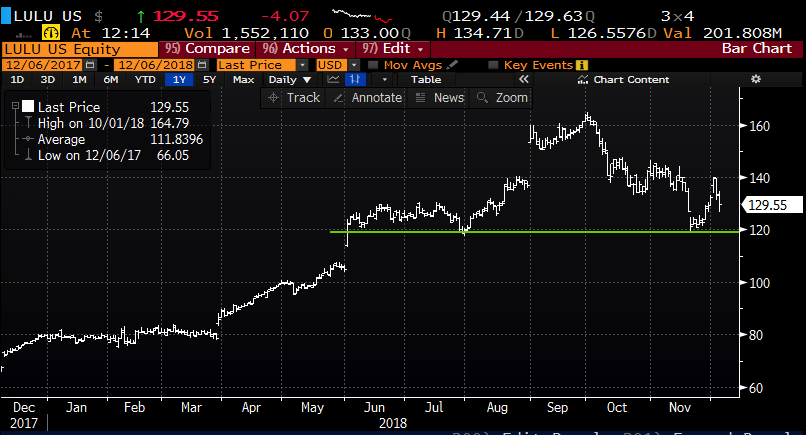 Taking a longer-term view, the stock’s multi-year consolidation between $40 and $80 dating back to 2011 saw a fairly dramatic resolution earlier this year, at one point seeing gains of 100%: 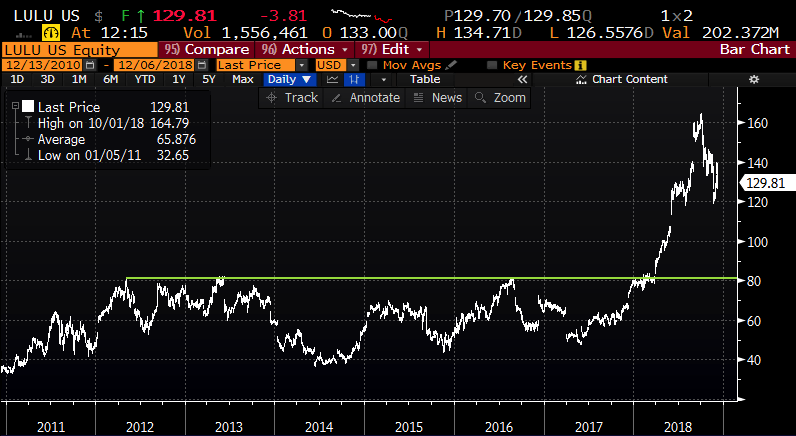 Investors have responded to the company’s return to an acceleration of double-digit sales and eps growth (expected for fiscal 2019) of 22% and 39% respectively. The stock’s rise though has caused its valuation to start to look just a tad rich as the stock’s return far outstrip growth, as LULU’s P/E and Price to Sales ratios are approaching new five-year highs: 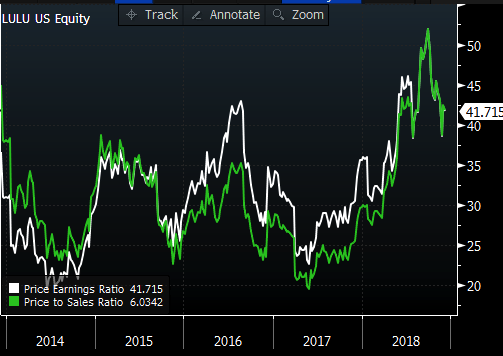 Wall Street analysts remain fairly mixed on the stock with 22 Buy ratings, 13 Holds and 2 Sells with an average 12-month price target of $164, back near the recent highs.

So what’s the trade?  The stock is obviously priced for perfection, a miss and guide down and the stock is easily down in line with the implied move. While it would take a considerable beat and raise in my opinion for the stock to rise the 11% implied movement.

if I were inclined to play for a miss I would target a move that outperforms the implied movement possibly filling int the earnings gap from early June when the stock was just above $100:

Rationale: this trade idea risks 3.4% of the stock price over the next two months with a max potential gain of 12% targeting a move back to last quarter’s breakout.

Or If I were inclined to play for a bounce in-line with the implied move I might just make it a one day trade in the weeklies…. for instance (there is a big BUT below):

Rationale: this trade idea risks 2.3% of the stock price for one day. This is a risky traded set up, get the direction wrong and it is a total loser. One would only do a trade like this if they were very convicted on the outcome of earning and that outcome would have the stock up 10% the next day, which has basically been the average move over the last many years.

DISCLAIMER: this is not a trade I would do, its basically a coin toss with worse odds. as we often like to say that long premium directional short dated trades into events like earnings are a very tough way to make money on a consistent basis, you need to get a lot of things right to merely break-even, direction, timing and magnitude of the move.